Dead – and Mumbling It.

Kristen Stewart mumbles her way through another TWILIGHT movie. 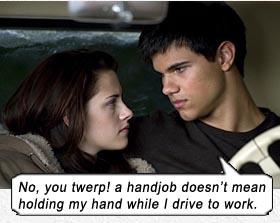 Synopsis of NEW MOON on the BluRay cover: “In the second chapter of Stephanie Meyer’s best-selling TWILIGHT series, the romance between mortal Bella Swan and vampire Edward Cullen gets more intense.”

And by more intense, they mean he almost gets to second base.

Stewart once again plays Bella Swan like she has avian flu, mooning after her vampire bf Edward (Robert Pattinson), whose man bits she has never touched let alone seen. He leaves town (bleary Forks, Washington) because his family can’t stand the sight of her blood, and so that another vampire clan will not harm her to get back at him. Naturally, leaving a demonstrably unbalanced, sexy 20-year-old alone in a town haunted by vampires and werewolves is the best thing they could have done to “keep her safe” – kinda like George W. Bush saying he cared about soldiers’ lives while sending them to die in illegal wars. Now, where was I?…

Bella’s constant begging for Edward to “change” her (i.e. bite her and transform her into a vampire) reminds me of those gay guys who WANT to be infected with HIV. (As if gay guys weren’t vilified enough already for being weirdoes, there is a strand of REAL weirdoes out there who crave infection either because their partners are infected so wish to join them, or so they won’t need to be “safe” after being infected, or that they feel left out of the “in” clique, etc.)

Against all Edward’s Obi-Wan spirit requests of “don’t do anything stupid” Bella takes a midnight ride with a stray biker – don’t know what she was thinking: maybe he would avoid touching her the way Edward avoided touching her. And the “dangerous biker” very courteously drops her off without touching her. Surprised she didn’t fall madly in love with him as well. Maybe because he was such a badass he came to a skidding stop, which almost broke a fingernail…

Bella turns her mooning to werewolf-in-training, Jacob (Taylor Lautner, who hasn’t yet evolved enough to button a shirt); he is part of a clan of werewolf boytoys, who prove to be almost interesting, until they try to act. Bella proceeds to not touch Jacob the same way she not-touched Edward, Just-Friending him with a vengeance, until even he tells her to piss off.

The cool werewolf effects kicked in just before I fell asleep.

TWILIGHT NEW MOON is not a love story or romance – it is a sludge-moving descent into soporific hell. And not in that good way, like when Satan claims your soul.

Speaking of the Prince of Darkness, shouldn’t His black influence be prevalent in any tale of vampires or werewolves? What happened to all the mythos enshrouding these dark entities? Director Chris Weitz and screenwriter Melissa Rosenberg (as well as Meyer herself) disregard all canon, as people turn into werewolves instantaneously, painlessly and without a hint of full moon; as vampires skulk around in daylight without their skin burning off – on the contrary, sparkling! – and not the slightest whiff of worm-infested coffin soil.

Edward decides to kill himself because he erroneously believes Bella has been killed. This, in a world of psychics, empaths and CELL PHONES. The Romeo and Juliet train is in motion and nothing logical is gonna derail it. Laughable that the writers analogize the greatest love story known to man with their beige bore-fest.

Bet this was the pitch meeting scene: To stop Edward killing himself, Bella must do a desperate dash through the streets of Italy during a religious festival, dodging red-garbed monks, as the bell tolls midday and Edward in slomo starts to expose himself in sunlight and thereby get killed by the religiousness of the monks. The vampire council doesn’t like this, yet where are they when he is slowly unbuttoning his shirt and Bella is running in that man-style to stop him? Apparently, their council chamber is just upstairs – too lazy to walk the twenty stairs to tell Edward he’s a prat. Bella dives on Edward – and I mean that in the most non-sexual way you can imagine it; kinda like a puppy dives on a tennis ball – telling her she loves him and his flat face is overjoyed to see her. Cue magnificent tears of romantic joy from teen girlies.

I dare anyone over 30 to watch this movie without rolling their eyes, needing an aspirin, slapping someone, defenestrating their BluRay, or begging to be put out of their misery.

The only two saving graces of NEW MOON are those fake-looking CGI wolves (they’re massive, at shoulder height standing taller than a man) and Michael Sheen, exceedingly delicious as Aro, the head of the vampire council. (In the UNDERWORLD series, Sheen is the head of the Lycans – the werewolves; talk about audacious crossover!)

And I feel sorry for 16-year-old boys worldwide, this TWILIGHT film series having bred a whole generation of mumbling and moaning high maintenance girlfriends who never put out and erroneously think Just Friends is a viable option; who believe true love means lying in a meadow with all their clothes on and watching your skin coruscate…