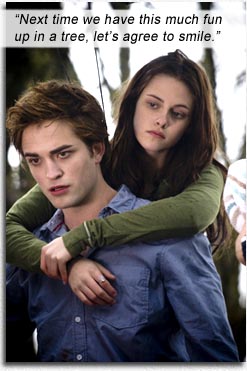 A chick falls in love with a fey vampire. They don’t have sex. The End.

Vampires used to be scary once. The iconography of the blood-drinking psychotic, the shape-shifting coffin-dweller, reached a horrifying zenith with the novel Dracula by Bram Stoker (published 1897). Then came the startling film NOSFERATU (1922). Modern media has progressively been bleeding out all the horror and sex from the dark, disturbing legends, starting with the camp Christopher Lee DRACULA movies of the 60’s and 70’s, followed by innumerable copycat movies, comedies (ONCE BITTEN, 1985) and overexposure (SESAME STREET’s The Count, BLACULA 1972) that turned vampires into laughingstock clichés. Anne Rice’s Lestat novels, made into INTERVIEW WITH THE VAMPIRE (1994) went for the jugular on sexiness with Bradley Pitt and Tom Cruise on fey overdrive, while UNDERWORLD (2003) went hogwild on skintight butt-leather and lace corsets (though its vampires were dangerous not because of their psychoses, but their big shiny guns).

Coppolla’s BRAM STOKER’S DRACULA (1992), though an ambitious failure (due exclusively to its supporting cast of Keanu and Winona), succeeded in bringing back the sex and danger, and also succeeded in conveying the tragedy of being Dracula (aka Count Vlad); that it was a curse, purveyed achingly by the brilliant Gary Oldman.

And now we arrive at the anemic TWILIGHT, exorcising every ounce of sex, danger and tragedy from vampire iconography – leaving us with a tale for 12-year-old girls seemingly written BY 12-year-old girls.

Set in rainy, depressing Forks, Washington, eternally in twilight (not in a sexy libidinous way, but in a rainy depressing way) Kristen Stewart is Bella, a “troubled teen” – excuse me while I whip out my Troubled Teen Flow Chart – who meets the Dangerous Outsider in school, Edward (Robert Pattinson), and falls for his enigmatic moodiness and flat face. 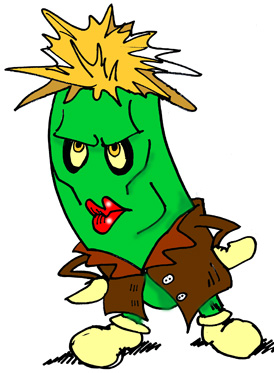 Pattinson (whom we are told is a sex symbol even though his face looks like he’s just run into a brick wall) delivers all his lines like he’s in a coma, and Stewart delivers hers in a wavering monotone like she’s on the brink of orgasm or eating ice cream too fast. Discovering Edward is a vampire is apparently not that big a deal – if her monotonal surprise is anything to go by. Edward tells Bella that his family are goody-goody vampires who abstain from subsisting on human blood, but rather drink the blood of animals. (Keep Fluffy away from him!) For this reason he can’t even make out with Bella because it will drive him into a sensual bloodlust.

But that’s okay with Bella, who would much rather lie in the grass with him with all her clothes on and talk inanely about stuff that not one male in the audience cares about. The one time they’re about to spank it, Edward pulls away and tells her it can never happen. Bella (a character created by three chicks that have no idea What Men Want) is still okay with that because only a 12-year-old girl can believe that true eternal love involves no coitus. But lots of interruptus.

Edward, who proclaims himself psychic, confesses to Bella, “I can’t figure out what you’re thinking.” A stab in the dark – how about: “I want to have sex with you, dude.” The first thing Bella notices when she walks into Edward’s room is the absence of a bed. He tells her, “I don’t sleep,” then flips her onto his back and goes frolicking through the trees in lieu of clitoral stimulation. Bella doesn’t mind in the least. After all, her underdeveloped 12-year-old mind believes she wants to “be” with Edward “forever” without thinking it through past the stage of lying in a field with all her clothes on and gazing at his Hayden Christensen lite impression.

Probably the only action that threatens to happen is a cringeworthy scene when a rival band of vamps intrudes on Edward’s family playing baseball among themselves during a storm. Then nothing continues to happen, thank god. Or I might have to write about something.