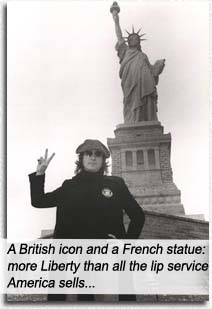 David Leaf’s and John Scheinfeld’s THE U.S. VS. JOHN LENNON is an insular little diversion, showcasing Lennon’s post-Beatles period when his activist voice made the United States government tremble in its widdle booties.

Taking a stand against the Viet Nam War (back in the day when “peacenik” was not a four-letter word), allying with activists Abbie Hoffman, Jerry Rubin, Black Panther Bobby Seale, lending his voice to political issues like the release of John Sinclair on paltry marijuana charges, John Lennon’s “radical” leanings eventually got him noticed by J. Edgar Hoover’s Gestapo (erroneously called the FBI).

In their quest to silence any who disagree with them, the fascist Nixon administration dogged Lennon until Strom Thurmond (then only 179 years old and looking not a day over Nosferatu) figured a way to silence Lennon without resorting to government-sanctioned murder (unlike their usual way of dealing with dissenters) – deport him back to merry olde Liverpool.

Like convicting Al Capone for tax fraud when they couldn’t bust him for racketeering, the Immigration bureaucracy started smearing Lennon and wife Yoko Ono with marijuana charges from years-ago Britain as “evidence” for deportation, but thanks to their canny lawyer, Leon Wildes, they battled until they actually won – on Lennon’s 35th birthday, on the birth day of son Sean, in October 1975.

As someone comments, looking back on it, it’s hard to believe that this pop star could have stirred up the government in such a manner and, although his effect on the Nixon administration may be heightened for the purpose of this film, the fact that the FBI involved itself at all in bugging, tailing and keeping secret files on Lennon illustrates the petulance, paranoia and panicky ignorance of what is supposedly the greatest superpower on Earth.

Released in 2006, THE U.S. VS. JOHN LENNON has all the potential to be another stab through the heart of an administration struggling for credibility (the Bush Klan), but never quite extricates itself from its own subject matter, ultimately about an activist who is dead (Lennon) and his dissent over a conflict that is over (Viet Nam), so misses the mark on compelling.

My greatest quibble with the film is that it never strays from Lennon twisting the government’s panties; it misses the opportunity to analogize the events of the early 70s with the repeated history of the early 2000s. The closest it comes to crossing historical boundaries is when Gore Vidal comments, “He [Lennon] was everything they hated. He represented Life, which was admirable, and Mr. Nixon and Mr. Bush represent death – and that is a bad thing.”

The overarching message Lennon promoted was simply PEACE. Granted, it was on a superficial level, with nary a nod to the political machinations that prompted war in the first place, but isn’t the raw sentiment noble enough even without political posturing? Why does or should anyone oppose him at all? Legitimate arguments may have criticized his execution of the message or advised him on protocol – but the few opposing press opinionators and government lackeys who dogged him were not concerned with legitimate issues – they debated Lennon on the message itself. What is the matter with these people? (Well, we know what the matter is – the creation and perpetuation of conflict for ulterior agenda – but that would take us more off topic than a Yoko Ono song.)

The movie loses street cred by calling Abbie Hoffman and Jerry Rubin “Radical Activists” as opposed to other protesting voices who are termed simply “Activists.” Isn’t that The Man’s point of view? What makes an activist “radical” anyway? Telling the Truth? Through a megaphone?! Speaking of peace in a time of war? – how radical!

Dictionary definition of radical is: “Favoring or effecting fundamental or revolutionary changes in current practices, conditions, or institutions” – but this movie uses “radical” to describe an affront to the government’s criminal war policy. And there is no consistency. Seems if you’re on the soapbox at enough rallies, you one day cross the line into “radical” – as opposed to guys like David Fenton, who is labeled simply an “activist” (sans radical – therefore, lame duck? Pussy? Slave to The Man?).

Paul Krassner is tagged a “radical journalist” (for hanging with Rubin and Hoffman and writing subversive newsletters, I guess), while Carl Bernstein (labeled merely a “journalist,” of ALL THE PRESIDENT’S MEN fame) helped bring down Nixon’s Satanic White House! You tell me: what’s more of a “fundamental, revolutionary change”?

Meanwhile an ex-con and felon who planned the Watergate break-in – G. Gordon Liddy – instead of being labeled with either his prisoner number, his bitch name in jail, or even “criminal mastermind” is titled “Former Nixon Administration Official.”

If it can’t get its labeling right, how do we take this movie seriously at all?

From interviews with Ron Kovic (author, Born on the Fourth of July), to Geraldo Rivera (radical mustachio), Mario Cuomo (ex-Governor of New York) to legendary author Noam Chomsky and former presidential candidate George McGovern (to name but a few), the film tries to cover all angles, but neglects to impart major reasons for world events – we get no explanation of why the Viet Nam war is even happening; Nixon is suddenly ousted from the White House with no Watergate; Mark David Chapman (Lennon’s killer) is not even mentioned by name (which is a good thing, I guess). Lennon songs are strewn non-chronologically throughout the movie, mirroring the almost arbitrary, stream-of-consciousness events, like the bed-ins, the bag-ins and those oh-so-radical megaphone rallies – though it truly is stirring to hear Power To The People and Give Peace A Chance in the contexts for which they were written.

Lennon understood the power of repetition, but unlike George W. Bush, he wanted the TRUTH repeated over and over until – as he says – even the housewife will say to herself, “Peace or war – those are my options? I’ll choose peace.” It is truly a tragedy that truth has to stoop to the methods of lies to become evident.

What could be clearer than “War Is Over (if you want it)”?

Under Imagine the film hits another low point in cliché, giving us still-frame flashpoints in Viet Nam (the bloated dead in graves, the child soldier, the gun to the head of a prisoner – you know the manipulative mantra).

Ironically, the current terrifyingly Orwellian rumored “North American Union” (a Free Trade treaty between the Head Eggs of the three countries of Mexico, the United States and Canada) seems to be congruent with John’s vision: “Imagine there’s no countries / It isn’t hard to do / Nothing to kill or die for / And no religion too” – the “brotherhood of man” “sharing all the world…”

But then Lennon gets all crazy again: “Imagine all the people / Living life in peace…”

Now THAT would be radical.