Uglier than we can imagine.

THE UGLY TRUTH seems to be telling us that strong, intelligent women are not desirable, or at least, not as alluring as eye-candy T&A who exhibit only as much brainpower as required to breathe and fuck. 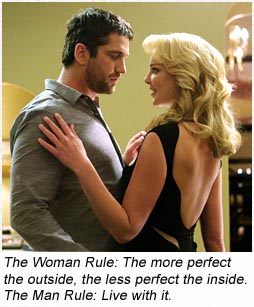 Why does the movie make its leading lady an ambitious, intelligent, decisive woman until she is in the proximity of her leading man? His message is that domineering women are “bitches” and men are only attracted to eye-candy T&A. If she really WAS intelligent, why does she immediately crumble like a schoolgirl under his tutelage? Which effectively proves she is NOT intelligent and strong, but desperate, insecure and petty.

So the movie’s message is that women can’t even BE strong and intelligent because it is only a facade until a stronger MAN comes along.

I don’t even have to be my usual double-slice of misogynist – I’m just describing exactly what the movie is portraying.

Gerard Butler is Mike Chadway (was Brick Mandick already taken, in Masculine Names For Dummies?), who has a segment on a News Program called The Ugly Truth, where he rants on women and relationships.

“…They say they want true love, but all they want is a check list. Is he perfect? Is he handsome? Is he a doctor? For you men who fit the criteria, don’t kid yourselves. Cuz they’re not sleeping with you, they’re sleeping with a carefully calculated set of venal choices. Money over substance, looks over soul, polished over principles. No gesture, no matter how real or romantic will ever compensate for a really impressive list of credentials.”

Katherine Heigl is his leading lady Abby Richter, producer of a competing television show, who thinks Chadway is full of himself and talking garbage.

But when the studio boss (Nick Searcy) tempts Chadway onto Abby’s show for higher ratings, Abby more than eagerly falls for Chadway’s shtick as it will help her bed Dr. Colin, her dreamy neighbor (Eric Winter). Her unconditional acceptance of Chadway’s methods to entrap the good doctor with her wiles means she has accepted his ranting as gospel. Which means all you ladies out there who dismissed Chadway as chauvinistic should ALSO be accepting him – because he is helping your leading lady, successfully we observe.

And very bluntly: all the courting and relationship advice Chadway gives Abby is absolutely true; and everything that Abby does corroborates Chadway’s advice, meaning the movie itself proves Chadway right – yet by story’s end, the movie which has just shown us how right he is, castrates him and tries to make us believe he is falling for his leading lady like any lovestruck low-rent douchebag, retrofitting his advice as if it was simply the wayward ranting of your average garden variety male chauvinist sex piggy. That’s called cognitive dissonance – holding two contradictory ideas in your head at the same time.

Written by three women – Karen McCullah Lutz, Kirsten Smith and Nicole Eastman – THE UGLY TRUTH, like most “romantic comedies” (‘scuse me while I vomit in my mouth and swallow it down for saying that phrase), is a case study in cognitive dissonance. To paraphrase a dictum made famous by Nicholson: like all women – they can’t handle the truth! Never mind that irritating advertising campaign that shows Heigl holding a heart up to her head and Butler holding one to his groin – UGLY TRUTH has nothing to do with “men thinking with their dicks while women think with their heads” or “men thinking physically, women thinking emotionally” – the movie is actually premised around Abby thinking with her groin and Chadway thinking empirically.

As with every unwatchable White American Romantic Comedy, there are a few fun bits, a few titters, but not worth the annoyance at how implausibly those situations are arrived at. Nice to see Cheryl Hines outside CURB YOUR ENTHUSIASM and John Michael Higgins in another small but effective role.

Chadway is right in classifying Abby as a dominating bitch – yet she was more than willing to stultify her dominatrix tendencies to bed the sexy doctor, which means that for the sake of sex she was willing to give up her very personality! Ultimately, she doesn’t give herself to the doctor, confessing she doesn’t really like him. Which is yet another admission that Chadway’s “woman’s checklist” exists; the checklist that Abby in fact subscribes to, and that she has discovered – as Chadway predicted – is an unreliable method of choosing partners. The movie proves time and again that Chadway’s dictums are correct – through its own leading lady!

After truisms like “Never talk about your problems ’cause men don’t really listen or care”; after the implicit message that the only way dominating bitches can be tamed is in the embrace of a MORE dominating man (Butler the perfect Man’s Man for this role); after being directed by a man (Robert Luketic, MONSTER-IN-LAW), for the sake of pairing the couple for the final scene, Chadway is emasculated so he can snivel down to Abby’s low-self-esteem level for a fadeout snog.

This is the exact moment THE UGLY TRUTH falls apart as a movie, a comedy and as a simple document on human interaction:

As a novelty gift, Chadway sends Abby a pair of vibrating panties (this in itself is another topic of discussion, pertaining to cultivation, which we won’t enter into), and she accidentally ends up wearing them out to an executive dinner meeting. (Already, you can feel the contrivance building, can’t you?) At the meeting, she loses the remote control for the panties, which a little boy picks up and starts fooling with, sending her into paroxysms of public pleasure, which she tries to pass off as needing to go to the toilet. (Someone actually wrote this stuff down in a screenplay.)

She rises, crossing her legs ostentatiously, and announces she’s going to the bathroom (to remove the panties, which only we the audience know about). Then the movie hits rock bottom when her boss asks her to stay and give her presentation to the execs…

Who in their right mind would ask someone to stay and give a presentation after they’ve just announced, cross-legged, that they’re heading to the toilet?

And then: who in their right mind would STAY and weather the mind-glutting pleasures of an orgasm in public? Which is what Abby does, going one better than Meg Ryan in WHEN HARRY MET SALLY by having a real scream-gasm.

A simple “Let me visit the ladies room first and I’ll be right back,” would suffice for professional protocol.

Yes, it’s funny and farcical and prurient – but arrived at in such a contrived manner that it ruined it for me and I had to put my pants back on in the theater.