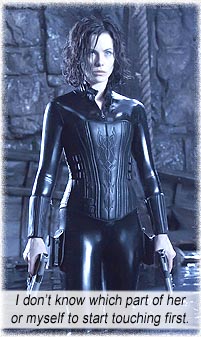 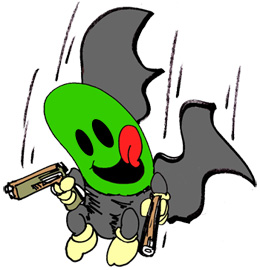 UNDERWORLD gives a shot in the arm, so to speak, to the vampire and werewolf iconographies, updating/reimagining both to be in an ongoing millennia-aged war that is escalating, plopping them in modern day Europe (or somewhere with underground rail transport and rain that won’t quit) with automatic weapons and computers. And leather.

Selene (Kate Beckinsale, who would soon marry the director – luckiest man alive, Len Wiseman) is a vampire “Death Dealer,” with guns bigger than her acting abilities and leather so tight and curve-hugging my Carnal Nerve nocturnally emissioned. She’s a lethal stalker and killer of werewolves (“lycans” in sexy new street cred).

Story is interesting twist on the legends, yet if you enjoy werewolf slash vampire movies, this may or may not be your cup of blood. You see, whereas all other werewolf and vampire movies have been correctly slotted into the horror genre, UNDERWORLD is an “action” movie whose characters happen to be vamps and thropes. We’re in their world now, so their intrinsic alienness is the norm, rather than an anomaly. Movie can get on with the shooting and running and blood-fests as common occurrence between the two “races” (just as any two given races on Earth at any given point in history will engage lovingly in shooting and running and blood-fests). Subsequently, dialog is childish, and action is filmed in that style that suddenly slams into slomo to accentuate the flounce of capes and the thrill of tight butt-leather, with no meaning other than for the sake of capes flouncing and butt-leather bouncing.

Latent werewolf, Michael (Scott Speedman) is bitten by a vampire – to breed a hybrid race that will win the war for the lycans, who are jealous that the vampires have such cool leather. Even though he’s a transgender, Selene inexplicably falls for Michael. Because he’s hot, I’m guessing. But vampire-werewolf love cannot be. So it is written in the ancient scrolls of the TV Guide. For advice on her love life, she calls on the Dr. Phil of vampires, their sleeping king, Viktor (Bill Nighy), who in hibernation looks like a zombie husk of a mummy, until he is revived by fresh blood, whereupon he looks like Bill Nighy (i.e. a zombie husk of a mummy).

Casting Kate Beckinsale was not a mistake. Garbing her in such tight leather is. Because I am blinded to anything else when she is onscreen. She is just too breathtakingly beautiful, too achingly sensual– Those pointy incisors; those devil-blue eyes– Look at that cutie go! Two-fisted gun barrels blazing, Hard Guy Overcoat flouncing, rain dripping pruriently from hand-grab spinner waist in leatherbound corset, spike-heeled boots and porcelain-creamy neck–

Uh, what was the question again?–