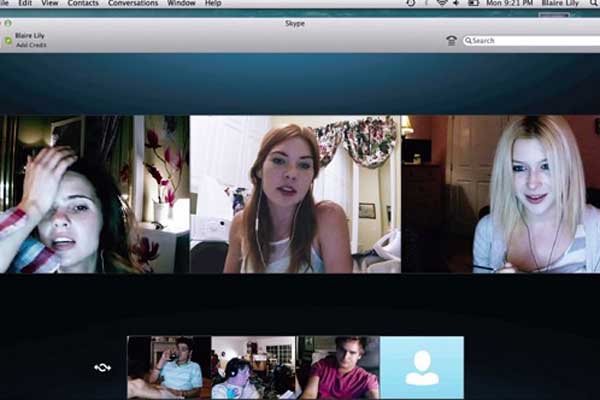 Ominous Stranger in a Video Chat: A Bug’s Life.

A dead friend on facebook joins a video chat with six other high school friends, and one by one, makes them kill themselves. Go, Unoriginal Teen Slasher film, go! But there’s a quirky redeeming factor to this same old story. It’s told in a brand new way…

UNFRIENDED makes its bones on pure balls originality in never taking its eyes off a computer screen. Credit where it’s due: writer Nelson Greaves and director Levan Gabriadze have created a unique moviegoing experience that emulates you sitting at home in your underwear like a lump, staring at a lighted rectangle.

Movie starts with a red-tagged online video of a teen suicide, that of Laura Barns (Heather Sossaman).

Then we see six high school friends in a Skype chat on a computer monitor. Understand that this computer screen view takes up the whole movie screen for the duration. It is not as irritating as found footage, because within the confines of a computer screen, paradoxically, we have access to the world via the internet (Google, YouTube, facebook, whatever), so any other scenes we see here (parties, prom, links, videos, etc.) take us beyond the boundaries of the computer screen – but we’re still enclosed within it! Isn’t this ultimately a meta-commentary on what MOVIES really are anyway? (That is: we stare blankly at a bunch of scenes from different angles that take us to faraway places, but we’re still just staring at a lighted rectangle!)

Still, for all its originality, UNFRIENDED is a one-off horror experiment. Though there are some surprisingly hair-raising moments, this format will be interesting but ONCE, and if it turns into a fad/genre, someone’s gonna get their head kicked in.

We see the friends in their six respective chat blocks, looking into their screens and amiably making idiot talk (as teens do), and one other person online – with a generic icon instead of their face (i.e. someone who has joined the chat, but has not turned on their chat camera)

At first, the friends think it’s a computer bug or a glitch. But then it starts communicating with them. The presence eventually reveals itself as someone/something malicious, whom they cannot shake, seemingly originating from the dead Laura Barns’s facebook account. We see the “action” from one of the friends’ POV, Blair (Shelley Hennig). (We can’t help casting our minds to another revolutionary film, with the constant mentioning of her name – THE BLAIR WITCH PROJECT. Intentional?)

We are viewing Blair’s computer screen, and are privy to her chat/Instant Messages to other characters. It’s intriguing and somehow captivating and fascinating to see how quickly she navigates around the internet, clicking between open windows, using right-click commands, etc. because it’s something we do ALL THE TIME; here on the big screen emulating the small screen, looking exactly like our daily bread. Although sometimes her lack of using hot keys (keyboard shortcuts) makes us wonder how computer-literate she really is.

We see Blair try to “unfriend” Laura Barns. Doesn’t work. The other friends tell us they’re trying to hang up on the intruder, unsuccessfully. It goes downhill fast, once the intruder starts revealing damaging secrets about the friends to each other, who are also all involved in some way with bullying Laura online into committing suicide.

Some ascribe moralistic intent to this shallow movie, citing it as a deterrent to online bullying. C’mon, really?! So if kids bully someone online, the victim will commit suicide and come back as a ghost to kill them? Wait, I remember: a wise old man in a galaxy far, far away said, “If you strike me down, I shall become more powerful than you can possibly imagine”? Oh, it all makes sense now! I’m not gonna bully that kid because he might be a Jedi.

The pros are few, the cons are many: From the outset, using an un-word like unfriended, a purely modern invention that makes no sense, warns us of the generational demo-GAP-ic the movie is aimed at. (Hey, I’m allowed to invent words too.) Then there is the plot: it’s your eye-rolling teen slasher fare, but not performed by actually stalking victims and slashing them, rather, performed through some kind of mind control, or – for want of a better word – magic. There is no physics explanation for why one of them would simply turn a gun on himself, or why one of them would puree his hand in a blender, except that the “ghost” made them do it. Who knows? Who cares? It’s teen slasher. Roll with it or go do something productive like scrubbing your shower tile.

Also, it’s astounding how these young nudzes who are presumably conversant in spam, viruses and bugs, unthinkingly click on links sent to them from this unknown malicious source. Okay, maybe it’s trying to kill them – but do they really want MALWARE on top of that?

Lastly, these have got to be the smartest kids on the internet. Their spelling is impeccable! Well, I guess if they were actually smart, they’d simply close their laptops and go meet at a diner somewhere and ACTUALLY chat, instead of staring at their lighted squares waiting to die. But I just can’t get over their typed messages, with perfect grammar and punctuation. Hundreds of words. Three wrong spellings.

In the real world, here’s a sampling of actual comments from this movie’s demographic, under the UNFRIENDED trailer on YouTube. These posts are verbatim; notice that one has a period at the end, and only one has a capitalized letter at the head of its sentence:

“i watched it the minute after i postet the comment and it was really good, non of my friends liked it tho :/”
“or just delete it from internet…noo she just need to kill everyone…cause she such an alcoholic victim.”
“they should be a game like that in real live”
“Its kind of hard to undestand if you arent following the movie a 99%”
“iz u 4 reel GURL!!??”
“no luh y u ask??? O3O”