“In training they just give you an ‘F.’ Out here you get killed!”
— Denzel in UNSTOPPABLE.

Didn’t Denzel say that in his Oscar-winning TRAINING DAY? Same thing applies here in UNSTOPPABLE, a kinetic, racing steel headrush about an out-of-control, unmanned freight train a half-mile long, loaded with explosives, headed for the city of Pennsylvania. And only Denzel and Captain Kirk can stop it! 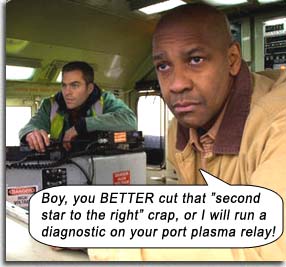 Again, Denzel Washington is the old dog teaching a young pup new tricks. He’s Frank, a 28-year veteran engineman, and the young pup is job-hopper Will (Chris Pine, STAR TREK 2009), on the railways simply because it’s his “next job.”

It could have been called SPEED 3, but for Denzel doing a better acting job than Keanu and Chris Pine being a hotter chick than Sandra Bullock.

All the devices are here: imperiled school kids, ticking clock, high explosives, estranged wife and small blond American kid; the depot boss Connie (Rosario Dawson) who three-way conferences the shit out of the situation; the knowledgeable train inspector (nicely played by a subdued Kevin Corrigan); the corporate ass-wipe (Kevin Dunn) who doesn’t want to derail the runaway train because – what a shock! – it will cost the company billions; the two daughters working at Hooters (whoa! There’s a new one!).

There’s even the Pretty Orange Explosion when another engineman tries to stop the runaway from the front and it barrels over him and he goes up John Woo style. So Frank and Will chase down the runaway from the rear, traveling backwards in their engine, in a daring attempt to grab it and brake it from behind.

UNSTOPPABLE achieves everything an action movie aspires to. Guts, Glory, and Girls as props. It won’t win Oscars, but people who think The Wrestling is real will lobby that it should. Director Scott (who directed Denzel in 2009’s train movie TAKING OF PELHAM 1-2-3) loves his strobed shots and circular dolly shots around the engine cabin that make us woozy, and for that, he should win an Unnecessary Overt Direction Award. A few Razzies can also be handed out to Denzel’s daughters who can’t act and Pine’s wife who consults the Acting For Dummies Handbook to find her Concerned Face No.12 (“When Hubby’s Life Is Threatened And You Regret That The Last Time You Saw Him You Had A Fight”).

The coolest thing about UNSTOPPABLE are the locomotives. I love the look of these modern oblong engines – like my train sets from days of sweet childhood in the cucumber patch. Many might prefer the traditional romanticism of the funneled steam engine, but those solid-body oblongs exude a dogged sturdiness that make those wild west steamers look like cheap tin cans. But I always thought the cab, the cockpit, was the “back” of the engine, with the oblong block being the “front,” so I’d run my train sets with the engine pulling its cars – unknowingly – backwards.

Later, when Frank runs his engine in reverse to catch the runaway from behind, it looks just like one of my toy trains operating on its little circles of track. Who’s laughing now? And where are my residuals?