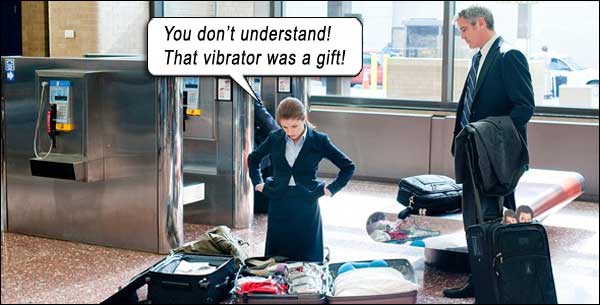 UP IN THE AIR is that rare chick-centric movie that doesn’t make me want to vomit or slap someone. It is a story about love, but it’s not a Love Story; it’s a movie about romance, but it’s not a Romantic Movie; it takes us on a bucking and diving flight across the landscape of human emotions and leaves us… up in the air.

Two ships pass in the night. And keep passing.

This movie is refreshing as a bottle of Orange Cream-Mama being shaken and opened in your face. A story about an enigmatic connection between two attractive, intelligent, middle-aged protagonists – not teen hipsters flapping platitudes and doing drugs in tight t-shirts. A movie that doesn’t dumb itself down, nor dumb us down, which surprises even the best of us nihilists.

Ryan Bingham (George Clooney, charm working overtime) and Alex Goran (curvy, sensual Vera Farmiga), two Constant Travelers turned on by each others’ elitism, meet at an airport bar and strike up a steamy, traveling relationship, never daring to get closer than a few cities apart. Clooney and Farmiga work beautifully together, underplaying against each other with an easy chemistry that sits on them like favorite sweatshirts.

Ryan’s job is to fire people from theirs, a kind of Termination consultant brought in by corporations too gutless to face their own employees when letting them go. Much like the impermanence of the job market he sluices through like a shark, Ryan’s life is uncluttered and itinerant – that’s the way he likes it: “All the things you hate about flying are warm reminders I’m home.” He describes the time he spent in his apartment last year as “43 miserable days.”

Alex is a little more mysterious, which will prove to be this movie’s trump card.

Ryan’s boss (Jason Bateman) saddles him with a termination novice, Natalie (Anna Kendrick), whose naiveté about career and love is in stark contrast to Ryan’s and Alex’s mature, intelligent take on life, sex and other mishaps. Natalie is an uncomfortable naif in her own skin, representing the flapping teen demographic and spouting the Chick Flick platitudes to prove it. She details her mundane life plan as something worth aiming for, and Ryan’s brother-in-law to be (Danny McBride, in a poignant, subdued role) details the exact same plan later as if it is a fatalistic dead end.

It is during this opening of hearts that Ryan realizes what he is missing. And here is where the movie comes into its own. We’ve all seen that character arc coming, where a guarded character realizes he is missing “opening up to love” and does the Bride-Running-Through-Streets gag to end up with his soul mate and retch vomit splash-on-shoes. But when Ryan realizes he would like a “co-pilot” to share his life, and tries to do something about it – he is thwarted! The character arced, the redemption awaited, and – as so often happens in real life – it was blown to pieces by the complexities of being human. And that bit of realism was beautiful for its left turn.

Directed and co-written by Jason Reitman, UP IN THE AIR and his other auteur work, THANK YOU FOR SMOKING (2006), are so much more honest and compelling than that girlie crap he merely directed, JUNO (2007, written by Diablo Cody). Movie’s denouement is a welcome shake to the shoulders, heartbreaking and uplifting at the same time. Produced by both Reitmans (Jason and father, Ivan), from a novel by Walter Kim, UP IN THE AIR takes the Chick Flick Handbook and tears out the pages on Making Real Men Vomit. Men (and pussy-men alike) can safely watch this whole movie with the person whose purse holds their balls, and not pretend to fall asleep or threaten a brain aneurysm.