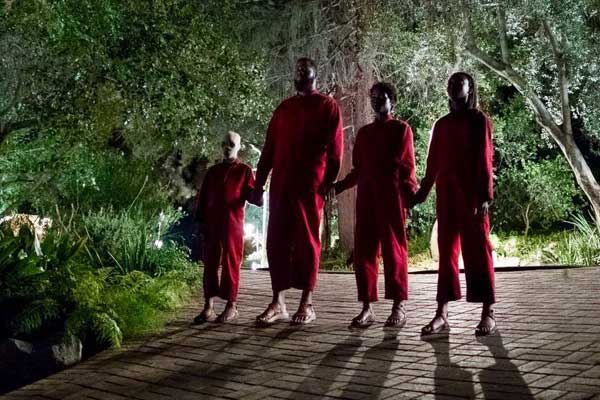 Comes at us with wild rabbit teeth.

Therefore thus saith the Lord, Behold, I will bring evil upon them, which they shall not be able to escape; and though they shall cry unto me, I will not hearken unto them.
— Jeremiah 11:11, King James Version

A vacationing family find themselves terrorized by another family, whom they discover – is THEM. I mean– US.

Doppelgangers? Clones? An indictment of our loss of self-awareness? In the wake of his award-winning debut GET OUT (2017), writer-director Jordan Peele once again crafts a mind-breaking thriller with US, a double-meaning, triple-entendre, quadruple-innuendo sledgehammer, a movie so dense with social commentary, cultural references, class struggle, startling reveals, black humor and biblical damnation it will feel like a chess game where you’ve just lost your queen.

Intro credits show hundreds of rabbits in stacked cages, and an intriguing title card about the thousands of subterranean tunnels under the United States. We piece together: experimentation? DNA? inhabited?

Movie opens with a young girl, Adelaide Wilson (Madison Curry), back in 1986, entering the shadowy Hall of Mirrors at the Santa Cruz Pier and encountering – her doppelganger! Screeeeam–

In the sunny present, Adelaide (Lupita Nyong’o), is your average American housewife and mother, taking a Santa Cruz vacation with her adorable husband Gabe (Winston Duke aka M’Baku!) and their two kids, Zora (Shahadi Wright Joseph) and Jason (Evan Alex). They tramp onto the same beach, near the same pier, meeting with their longtime friends, with whom they share a friendly status rivalry, Josh and Kitty Tyler (Tim Heidecker – the modern-day John Heard – and Elisabeth Moss, THE HANDMAID’S TALE). Adelaide’s horrific childhood memories are stirred when her son encounters a raggedy man on the beach, near the Hall of Mirrors entrance, with blood on his hands. 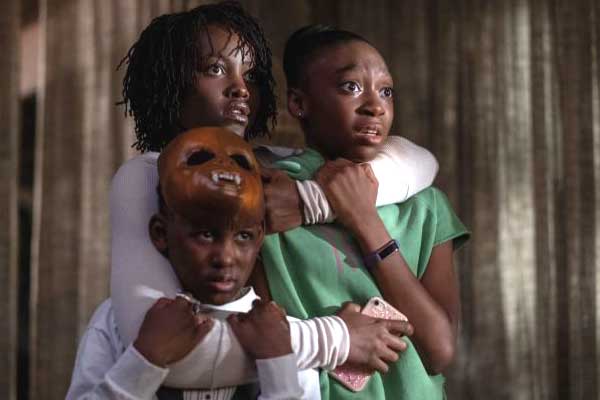 “You won’t take my three most precious things: my daughter, my son, my iPhone XS.”

That night, four strangers in red jumpsuits overrun Adelaide’s family in their vacation home – the four assailants look like each of her family members, including her. As son Jason observes in shock, “They’re us!” The invading family is oddly retarded and feral, the father a big dumb galoot, the boy scampering about like an arsonist animal, the girl grimacing too deeply, all of them obeying the will of the mother, Adelaide’s double, identified as Red.

And Red speaks… A hollow, faraway wheeze, her voice issuing from a well of tears: “Once upon a time there was a girl (referring to herself), and the girl had a shadow…” (or is she?…)

Doppelgänger: noun, German, “double-goer”; double, alter-ego, counterpart, someone who looks exactly like someone else but is not related to that person.

Clone: noun; an organism or cell, or group of organisms or cells, produced asexually from one ancestor or stock, to which they are genetically identical; an organism that has the exact same chemical patterns in its cells as the original from which it was artificially produced.

Jordan Peele relates the inspiration for US, as an ongoing fear of one day seeing his doppelganger across a railway platform, and what it would imply if that doppelganger shot him a wry smile… Since there is clearly experimentation going on in US (note the rabbits), Adelaide’s intruders are not technically doppelgangers, but clones – they don’t just “happen” to look like their surface counterparts, they are intended cellular copies.

Red tells of the underground world of doubles, calling them “the tethered” – connected psychically to their surface counterparts; living their lives mimicking the actions of their originals, eating a meal, talking on the phone, walking the midway; absorbing their counterparts’ tics and mannerisms; all waiting, waiting, waiting for a day when they could rise surfaceward.

Thus, we wonder why Red isn’t more direct in killing Adelaide’s family, and taking her place in the up-side world. She instead becomes Bond Villain, expounding (in that back-of-the-throat fibrillation instantly terrifying and meme-able) on the world under the world above. Precipitating Chase Movie. Unlike most chase movies, the motivations run deeper than just Catch and Kill; Red’s procrastinating explains itself in the film’s shattering climax. 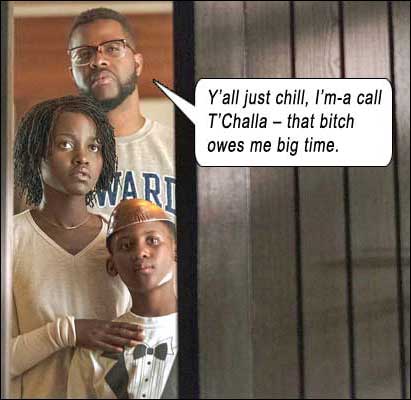 To rework a common YouTube gag:
They say people who do comedy are repressing a dark side.
Jordan Peele: “Hold my beer.”

Peele’s last film was about black vs. white; and though US seems similarly themed, it’s actually rich vs. poor, or have vs. have-not. Though Adelaide’s family is black, and their closest summer friends are white, the rivalry is not racial, but a rich-toy arms race.

Audiences might perceive black vs. white here for meta reasons: Peele has openly said he will not hire white people for his lead roles. Of course, that slice of moviegoers conditioned to believe adventures only happen to white people went nuts. A second reason might be that – the white family gets killed first, in a Tarantino-esque jab at upending convention. Come on, shrill social media – this is all surface! And US is not about the surface… but the sub-surface… remember?…

As they relax on the beach, immediately we sense the First World Problems of Kitty jovially whining to Adelaide that her husband hasn’t bought her something she desired, and how it’s vodka o’clock (to kill the pain of that deprivation). Adelaide seems ambivalent to the richie competitiveness, but husband Gabe is very caught up in it, commenting on the Tylers’ status time and again, and going so far as to buy a surprise boat later that day, to outpace Josh Tyler.

So: Rich v Poor. I quite like some YouTuber’s observations that the rich (Adelaide’s family) deliver their killing blows to the poor (the Tethered) using objects that denote wealth – a golf club, a fancy paperweight, a boat! Sounds overboard – but upon examining each kill, hmm, give that YouTuber a Like, and erase that previous comment that just said “fag.” Gabe is obsessed with the artifacts that symbolize his wealth, so he too is guilty of the sin of keeping the poor down – just by being rich. The very condition of being wealthy puts him/you/us in conflict, unintentionally, with all those who are less fortunate than us.

Now maybe I – like so many others exploring Peele’s allegories – am digging too deep. Maybe when the Tethered howl after Adelaide’s family, it’s just a simple chase movie with a devastating tragic reveal at the end. Maybe the whole point of this exercise is Peele showing off his kinky-ass storytelling. But then, why make the antagonists mirror images of the protagonists? The onion layers are many.

There is much made of the interchangeability of the title “US” with the country of the United States (U.S.). Is Jordan Peele showing us an allegory of life in the United States? And warning us of how riven the classes are?

Those Tethered, those less fortunate underprivileged underground – are us, the body of the populace that makes up the U.S. Is the movie a commentary on what the U.S. (as a country run by corporations, foreign and domestic) is doing to the least of its citizens, especially in this age of xenophobic imbecile Dumbo Donald – beating them back, beating them down, even if they are striving to reclaim a shred of their humanity? Ensconced in materialism, do we even hear the cries from below of all those struggling for a soupçon of breathing space at our consumerist table? Because those suffocating cattle – are ourselves; are us.

Do you sometimes feel that your best interests are not shared by your Masters?
— Poffy The Cucumber

“Hands Across America” keeps rearing its head in the middle background of US. It’s where the Tethered derive their name, from that 1986 initiative by the Reagan administration that attempted to raise money for the poor by everyone across America linking hands for one perfect day. And see how there are no more poor people in 2019? 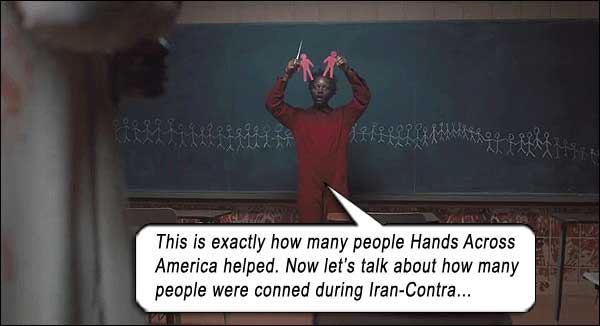 A dismal failure (not least because it was organized by republiKKKans, traditionally proven to be much bigger grifters and thieves than the Democrats), Hands Across America only raised $32 million, over half of which went towards infrastructure of the stunt; the rest – who knows? Demonstrating perfectly the petty “charity” of the wealthy. The hands didn’t even connect all the way across.

Now the Tethered rise, reclaiming that stunt as their own mark of solidarity against the richies themselves.

All four principals are also playing their doppelgangers. As obvious as that sounds, and is apparent onscreen, the movie is so involving, so laden with portent and atmosphere – that no one is mentioning their brilliant dual performances! Though we are well aware of the seamless camera trickery, we settle into the body of the film taking it for granted they are different people!

Composer Michael Abels works that screech violin up and down your spine, incorporating snatches of what has become the movie’s unofficial theme song. You will never listen to Luniz’s I Got 5 On It in the same way again. The film uses the recorded version of the song, plus an orchestrated remix titled The Tethered Mix – the most effective use of a cello playing just a couple of notes since JAWS.

Jeremiah 11:11 is seen scrawled in certain places, but the biblical verse is never quoted, and is only vaguely relevant; our attention is drawn to “11:11” simply because it triggers mirror images. And nothing is ever revealed or hinted at regarding the cloning technicians who started this bedlam. In the final scenes, Adelaide ends up in the tunnels, pursuing Red, while hundreds of rabbits roam free about her feet, having outlived their use (because the clones are all grown, ready to rise)…

If Jordan Peele wants to locate his Tethered Clone, just keep making movies so critically and commercially successful, and for a piece of that pie, one day, Jordan will see that wry smile across the railroad tracks…

Hall of Mirrors ○ Key & Peele
Can we see shades of Red in Jordan’s
jumpsuit murderer?

SPOILERS
The Tethered Techs.This whole story is predicated on a lot of legwork from the cloning technicians. For example: We have to assume that the children are not actually the offspring of Red and Big Dumb Galoot, because that would mean they had to mate at exactly the same time as their surface counterparts; also, mating at the same time won’t guarantee the kids look like their surface counterparts, thus the kids must be individually cloned from the surface kids.That means every Tethered must have been cloned when they were first born, or – more disturbingly – in utero. Because when you clone an adult, you don’t just instantaneously get another adult; that clone has to start afresh as an embryo and then grow at a normal human rate. So they had to grow at the same time as their counterparts. Did every woman in America have these cloning scientists sneaking around their birth canals and extracting DNA surreptitiously? And then retreating into the tunnels like wraiths?

That is the greatest conceit of this movie – that it ignores these logistics and knows we will not question them, because the threads are too complicated to tease out any logic.

In the final reveal, we discover Red is actually the original Adelaide – the young girl who wandered into the Hall of Mirrors at the beginning – and the tale takes on horrifying layers of tragedy. It means the relationship between Big Dumb Galoot and Red was a forced one, in essence, rape, authorized by the cloning techs. Red told Adelaide that she learned to dance because Adelaide learned to dance. Meaning the clones (with which she spent her life) were forced/induced/trained to mimic everything their counterparts did. Which begs the question: every time Gabe had sex with Adelaide, did Galoot have to pile on Red too? The mind breaks. But there is no intimation of child-rape, so maybe it was a case of Red being old enough and wanting sex, but the only males around were the Tethered weirdoes, so it was unsatisfying to say the least. Or maybe meeting Tethered Gabe/Galoot was the best thing to happen to her? Just asking the questions anyone would ask (or maybe just Howard Stern)…