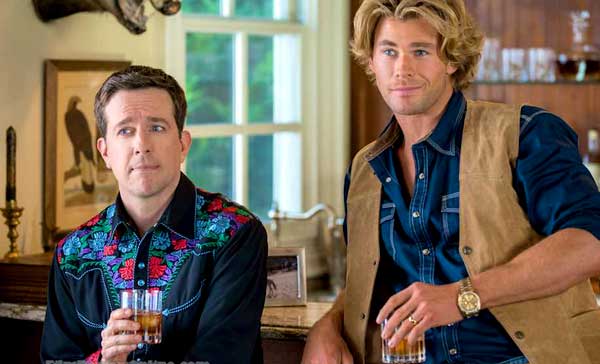 One of these guys is a great comedian, and the other is Ed Helms.

A Vacation from Comedy.

First, there was NATIONAL LAMPOON’S VACATION (1983), which pitted unfunny douche Chevy Chase against an unforgiving holiday road. Now, 32 years later, that iconic non-comedy can at last be remade, because there is somebody entirely as unfunny as Chevy Chase to pass the torch to – Ed Helms.

Not exactly a remake or a reboot, VACATION is a sequel-acting-as-reboot; the story of Son Of Douche partaking of a road trip to emulate the legendary trek of his father. As Helms says in a wink-wink moment, when his own son complains he’s “never even heard of the original vacation,” “It doesn’t matter; the new vacation will stand on its own.”

He’s right. The new VACATION is a stand-alone piece of shit.

Helms is Rusty Griswold (who was young Anthony Michael Hall in the original – yes, I’m also wondering how a ginger can grow into a brown-haired man), whose sense of inadequacy (as a man, a husband, a pilot and a father) leads him to the pathologically insane decision to drive cross-country to visit a theme park called Walley World. He says it’s because, like his father, he wanted to pull out all the stops and do something fun for his family. Uh, you’re absolutely sure it’s not about your lack of penis?

Christina Applegate is wife Debbie, who puts up with the lusterless un-man Rusty for reasons which probably involve “settling” when all the real men escaped her blond ambition; Skyler Gisondo is the Griswold’s oldest son, blessed with the perfect Hit-Me face for a comedic actor, and Steele Stebbins is the youngest son, who incessantly bullies the older one because – well, look at that face.

Misadventures ensue on the road from Chicago to Los Angeles, which includes gags about the two-ended Ukrainian hybrid rental car, visiting Debbie’s drunken sorority, getting busted trying to screw at Four Corners Monument, bathing in hot springs that are really sewage, rafting with a suicidal raft guide, and riding a rollercoaster that stalls on a loop. And there’s Seal’s Kiss From A Rose, for Ed Helms to show off his womanly singing voice.

During the “sex talk” Rusty’s teen son asks him what a rimjob is. And Rusty earnestly does not know. How could a grown man not know what a rimjob is? Later, he knows what a gloryhole is. But on the chart of carnal knowledge, gloryhole ethos is way beyond rimjob. This kind of plot hole makes me want to toss salad.

Cameos perk up the proceedings slightly (Colin Hanks, Michael Pena, Nick Kroll, Kaitlyn Olsen, Keegan-Michael Key, Ron Livingston), and there are admittedly some jocular moments that make us forget Ed Helms is about to appear onscreen and ruin everything.

The only reason this movie even gets off the ground is – Chris Hemsworth, whose foray into comedy is as powerful as Thor’s biceps. He’s Stone Crandall, married to Rusty’s sister, Audrey (Leslie Mann, as pert as ever). Stone’s a wealthy southern redneck Republican who loves guns, herding his cattle himself, and won’t let his wife get a job (“not as long as there’s breath in my body”) despite all her pleas through fake smiles. He refutes her attempts at independence with such incognizance through that golden Asgardian smile, that it makes his straightforward shallow hunk the best part of the movie. Especially when he walks into Rusty and Debbie’s room that night with only undershorts on and a godhammer in his pants. 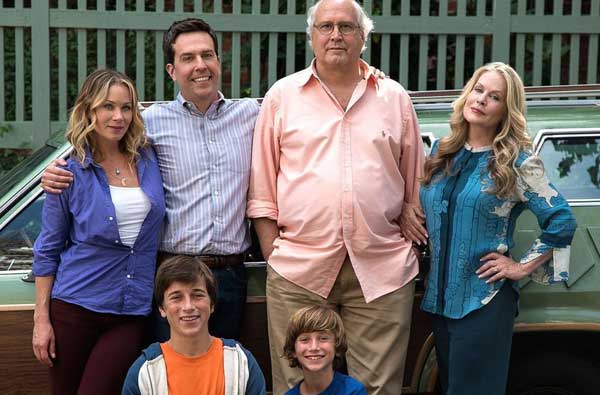 Then, like a broken bone that never quite heals – Chevy Chase as Clark Griswold, the douche who started it all. Rusty’s family seek shelter in his father’s bed and breakfast. Glorious Beverly D’Angelo is still radiant as Clark’s wife, but they have nothing to add to this misadventure except provide a malodorous link to the original.

I can’t wait for Ed Helms to take a really long vacation – from acting.