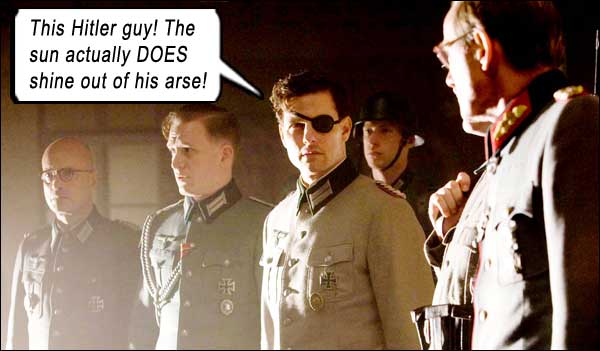 Plight of the Valkyries.

When I heard Tom Cruise was to play a World War II Nazi, I laughed my LMAO off. Tough sell for a non-actor. And by non-actor, I mean movie star. And by movie star, I mean he can’t act.But then it all comes clear. The role was Colonel von Stauffenberg, who was involved in one of the more famous assassination plots against Hitler – so Cruise was not really being asked to extend his acting bone; he was a disenfranchised Nazi, a veritable “liberal” in America’s eyes. He was a traitor to the Germans, but you know what they say: One man’s traitor is another man’s Cruise.

And, ludicrous as it may sound, Cruise and director Bryan Singer (X-MEN) actually boast of the “risk” for Cruise in taking such a role. What risk? His character is the Hero, with a beautiful wife (Carice van Houten) and four loving, blond kids (cos he’s German, see); he’s principled, a born leader, and hates the Nazis so much he’s practically American. He doesn’t even speak German in the film! Associated Press actually published this stupid article: Tom Cruise taking risk with Nazi film `Valkyrie’.

In VALKYRIE, it is 1944 and Chancellor Adolf Hitler, whom many on both sides regard as an “insane genius,” is not only losing the war that he started, he is committing atrocities and driving Germany’s credibility with the rest of the world straight into the toilet. Kinda like George W. Bush – without the “genius” bit. We meet Colonel Claus Schenk Graf von Stauffenberg (Mr. Cruise, proudly pretending he is “taking a risk”) as a young rebel, displeased with Hitler’s management of the war, his mission impossible: “to serve Germany – or the Fuehrer – not both.”

Then the Allies bomb him. Stauffenberg loses his right hand, half his left hand, and his left eye. If that doesn’t make you wanna blow up your Chancellor, well…

Stauffenberg is recruited by a cast of “Chermans,” so upper-crust British they make your butler feel like an illegal Latino: Kenneth Branagh (as Major-General Tresckow), Bill Nighy (as General Olbricht), Tom Wilkinson (as General Fromm), Terence Stamp (as Ludwig Beck), Eddie Izzard (as General Fellgiebel), Kevin McNally (as Dr. Goerdeler). The German names won’t mean a thing unless you know the story – the joke is in the casting. It is why VALKYRIE stumbles conceptually, because it is always in the back of our minds, “No wonder they’re trying to assassinate Hitler – they’re BRITISH!”

Bad Guys are British, right? Staple of Hollywood. So casting them as Germans was no stretch, but director Singer ensures that the “good” Bad Guys (i.e. traitors) are all British actors and the “bad” Bad Guys (i.e. Nazis) are actual German actors.

Then there’s Tom. Fruiting about the authentic-looking WWII backdrop, in no way trying to inhabit the role of a one-handed, eye-patched, high-ranking German Chief of Staff. Just Being Cruise. The American accent is bad enough. (We give the filmmakers credit here for the artful way they suspended our disbelief in everyone speaking English: the opening titles are written in German, and morph into English, then we hear Cruise speaking German with English subtitles, cross-faded into him speaking English.) We get the point of the translation for our lazy Western ears, but there is more to a role than an accent; Cruise gives it nothing more than Cruise. We do not lose ourselves in this “German’s” conflict – committing the highest crimes known to man since Judas Iscariot. It’s Tom Cruise, eat your popcorn.

The two things foremost in my mind were Cruise’s ingenious bluescreen glove he’s obviously wearing, and how hard the Shakespearean vets on set must be laughing at his babyboy acting chops over lunch. 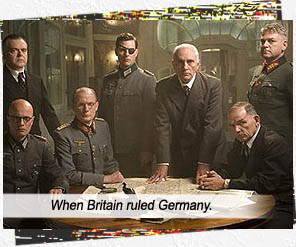 As a political thriller, VALKYRIE succeeds, though. Even with Tom just Being Cruise. Writers Christopher McQuarrie (THE USUAL SUSPECTS) and Nathan Alexander compress events and often just falsify events to keep it popcorn-friendly – this is not a historical document – but they do not lose too much in their streamlining because the story itself is just so entertaining. (To understand the extent of the operation, and its many complications that are not shown in VALKYRIE for brevity, one of the most authoritative sources is still William L. Shirer’s The Rise and Fall of the Third Reich.)

“Valkyrie” was the code-name for a plan that called for Germany’s Home Army (led by Thomas Kretschmann – he was the Euro boat captain in KONG 2005) to hold major German cities in case of a revolt from the millions of foreign laborers. Stauffenberg says, “I’ve rewritten Valkyrie” (which is ironic, considering the filmmakers re-wrote the events of Hitler’s assassination in VALKYRIE as well) – an idea which comes to Stauffenberg while listening to Wagner’s Flight of the Valkyries (somehow Singer squeezed it in).

The plan: to kill Hitler – with a good old-fashioned time-bomb (with no Roger Ebert Red Digital Readout!) – then report that SS radicals were trying to take over the cities, which would allow the conspirators to mobilize the Home Army to arrest all SS officials. This would nullify Hitler’s main Gestapo bulldog, Himmler.

It is a pleasure to see a modern movie that doesn’t use holo-computers, laser fields, cell phones or cockamamy technology so outlandish it might as well be magic. (I refrain from dropping the classic Arthur C. Clarke aphorism on you. Congratulate me. It’s harder than you think.)

Stauffenberg plants the bomb in a briefcase near Hitler during a staff meeting. It detonates, seemingly killing everyone in the room. The Home Army started its takeover of major cities, but just as Germany was about to become the United States of Tom Cruise – Hitler was discovered alive and made a public radio announcement to proclaim his survival was divine.

The conspirators failed by not controlling the flow of information. This was in a time when mass communications were in the form of telegrams sent to a central communications switchboard, then forwarded on. Though the conspirators had hundreds of high-ranking officers onboard Valkyrie, they failed to recruit the low-ranking message personnel. The telegram of Hitler’s death stunned these indoctrinated Nazis, but the following one about his survival made them smell that rotten something in Denmark (on accounta it’s so close to Germany…)

Just as the conspirators were saying, “I love it when a plan comes together,” the Home Army is re-claimed by the Nazis. As Stauffenberg’s orders go out over the wire to arrest SS officers, orders issue from the Wolf’s Lair (Hitler’s HQ) to arrest Stauffenberg. The wire operators chose to send on The Fuehrer’s orders and ignore Stauffenberg’s.

Stauffenberg’s plan had to work, so he made no effort to hide his tracks. He was discovered and executed within the 24-hour period when Valkyrie was launched on 20 July 1944. He was executed 21 July 1944.

Somewhere in Germany, there is a monument to Tom Cruise for his brave sacrifice. Or is it in Britain in the Risky Business Untrained Actor’s museum?…