Sunday afternoon, 12 years old, television in brightly sunlit family room, ice cream with a big spoon – any wonder that this film is a cult classic, when these are the types of memories it conjures? 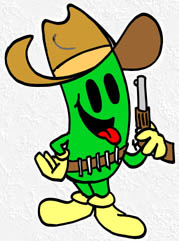 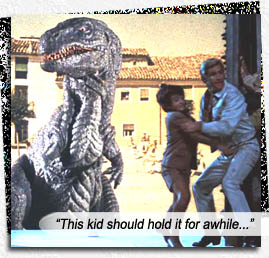 In the old Mexican west, cowboys discover living dinosaurs in a lost valley and bring an allosaur back to the city, whereupon it escapes and starts eating people.

As an adult, you visit the corporate cinema complex, eat hot dogs which taste like underpants, lose yourself for just under three hours, then step back out into a world of social hypocrisy and mortgages, car repairs and medical bills, interpersonal relationships and self-esteem issues. Such was not the case with movies of this ilk – when we first viewed these movies, we were encapsulated in our parents cocoon of safety and familiarity. These movies were not isolated enjoyable experiences – they were altogether high points in a bubbled world where we floated in ignorance of our complicated futures.

So though the dinosaurs in THE VALLEY OF GWANGI may look like stick figures when compared with the “real-life” saurians in JURASSIC PARK; though the acting may be bluntly one-dimensional (even with James Franciscus eerily doing his Charlton Heston Lite routine); though the story blatantly rips off KING KONG – all this matters not. All we can think of is that “ice cream with a big spoon” era – and the thrill of decades-old youth comes flooding back.

Which is why this movie will always be a pleasurable experience for viewers over the age of the MTV Generation.

As to the movie itself (before the Running and Screaming starts), it boasts quite an intriguing exposition – a traveling rodeo show has secured an Eohippus (more correctly termed Hyracotherium), which incites the blood of all the principal and peripheral characters, all of whom visualize their own schemes involving the Dawn Horse, infusing the plot line with the charged spark that propels it to the second act efficiently. The curtain has yet to be raised on the film’s premier attraction – the allosaur whom the natives call Gwangi, which in traditional Spanish means “mad large box office.”

There is a definite stepping-up to the Allosaurus reveal – first, we meet the Eohippus (neighing like a modern horse, which would be unlikely for an animal that size; more likely, it mewled or barked); the next beast revealed is the over-acting archetype Professorius Histrionicus (Laurence Naismith) – who is instrumental in driving the players into the Valley Of Gwangi; the wolf enters in the form of James “Heston-was-too-expensive” Franciscus (with the transvestite-themed name of Tuck), who immediately tries to mate with the red-headed female owner (oh – “old flame” – I get it!) of the traveling rodeo show (Gina Golan as TJ).

An unconvincing day-for-night scene later, the principal cast is squeezing through a rock crevice, chasing the Eohippus, when their youthful South-of-the-Border sidekick, Lope, is abducted by a Pteranodon (insert joke about Mexican takeout here). Next we see a species of Ornithorlestes, which in turn runs into the jaws of – cue fanfare – the Allosaurus.

The second act Running-and-Screaming is quite tolerable, as it involves only a few human characters, with the real stars of the film at last revealed in glorious “Dynamation” (effects wizard Ray Harryhausen’s stop-motion animation technique). The film trumps itself with the allosaur-styracosaur battle, the herbivorous Styracosaurus obviously not lucid, which is why it would non-instinctively stray so far from its browsing-on-plants schedule to pick a fight with a carnivorous dinosaur which usually stalks it for dinner. (Old dinosaur movies loved pitting ceratopsians against tyrannosaurs.)

The Allosaurus is also obviously maladjusted, as it has been dealt no less than three food sources – a Pteranodon, Ornithorlestes and Styracosaurus and it barely picks at any of them, opting instead to go roaring after puny humans on horseback even though they are running away from it. (I guess no one told the film-makers that predators, having killed their prey, EAT it.)

There is an incongruous example of ironic wit in this second act when two cowboys square off with each other, while still in the dangerous valley of dinosaurs. Before they can throw a punch, the woman intervenes with the admonition, “Stop that! Where do you think you are – civilization?” It was strange to hear this awareness of our mismanagement of society coming from a movie this old, but it does beg the question: So if everyone knew since back then – why hasn’t anything changed?

The minimal character arcs are all played out within the first two acts, so as not to cause any accidental thinking in the all-important Running-and-Screaming third act. Tuck was once a free spirit – now he wants to use Gwangi for a big payoff to settle down with his ex, TJ; while TJ, once the settling-down type, now wants to rule the world with Gwangi at her side. Literally one second before the Running-and-Screaming starts, they both reconcile and – onto third act Movie Cliché Mayhem we go!

Ray Harryhausen once again flaunts his mettle: allosaur versus elephant! (For Harryhausen himself, I can’t imagine that ice-cream-with-a-big-spoon would be his memories of these pictures – rather, slaving-till-dawn-no-food-no-budget, living on coffee and Pepto-Bismol. Luckily, he attained immortality through his Brew-and-Bismol binges…) Again, the carnivore kills prey and stalks off to chase small tidbits running away. Lured into a cathedral – some fragment of metaphor fighting to make itself apparent, and failing – the allosaur stalks the principals, and Tuck starts the inevitable fire for the finale (Franciscus, no stranger to B-Movie convention).

And the crowd watch the subject of their wonder incinerate, while we are left to discern the innumerable “messages” that might be purveyed by the subtext. Was it that humans must destroy what they cannot control? Was it that greed can only lead to destruction? Or dinner! (Burn cathedral at 4000 degrees for half a day, remove crispy dinosaur and baste with guilt – serves 1300 Mexicans). Or was it simply pioneering the metrosexual look with James Franciscus?…

By now, the ice cream is sloshy in the base of my bowl and I make slurping noises as I put it to my face…