It was a Monster Mash!

How does Kate Beckinsale run in those stilettos? She is one of the most beautiful women on this ugly planet – but that Boris-and-Natasha accent is a real turn-off. Her Transylvanian is worse than Don Cheadle’s cockney. 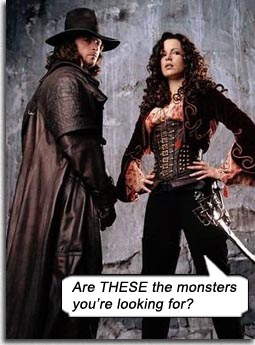 In VAN HELSING, Beckinsale is Anna Valerious, a European village warrior woman with big hair, big sword and tight pants, whose quest is to destroy the monsters terrorizing her village. She is joined by one of the other most beautiful women on the planet, Hugh Jackman; curly cascading locks, magnificent chest, azure piercing eyes, aquiline nose, lips like sugar — waitaminute! Am I talking about him or her again?…

VAN HELSING is an old-fashioned monster tale with new-fashioned sex symbology. This ain’t your daddy’s Van Helsing. Vampire hunter Abraham Van Helsing was introduced to the world in Bram Stoker’s lavish 1897 novel Dracula, and in all successive media, we’ve grown used to Van Helsing as a crotchety old curmudgeon with a wooden stake in upraised fist ululating at the lightning. But Jackman is more like Ted Nugent hunting caribou in a loincloth (and without the idiotic Republican ideology); witch’s hat and rock star hair, flouncing floor-length leather and a repeating crossbow, his Playgirl muscles on standby for the final werewolf-vampire battle.

This Van Helsing is a hired assassin for Mother Church, hunting all manner of supernatural and unholy beast. They call him “The Left Hand Of God” (how Christian of them, as if that euphemism absolves them of their mortal crimes). He also gets bitten by a werewolf (shove that in your Van Helsing canon!), so his blood becomes mutated, his body becomes hairier than Paul Stanley’s chest and he grows long steely claws; in other words, he becomes Wolverine.

And he’s hunting… Dracula (Richard Roxburgh), who seems to have a clouded past with Van Helsing, calling him Gabriel in an avuncular tone, rather than Abraham (but in that pseudo-Transylvanian, so it sounds like Gabryelle, with umlauts and stuff).

And there’s even Dracula’s craven assistant named Igor (Kevin J. O’Connor), who, whenever Dracula calls his name, must answer in that monster lisp, “Yesh, Mastah!” as he does that body-turn with arms flailing loosely.

David Wenham is Van Helsing’s friar sidekick, who is the voice of plot, outlining tales of intrigue with the convenient device of archaic tomes that always have pictures to illustrate exactly what he describes. This old cinematic technique – even in this fun-filled romp – is wearing on my patience. There are always PICTURES of the horrors that someone describes, like the listeners (audience included) cannot take the storyteller’s word for it unless we see those medieval hand-drawn Bosch-esque devil-drawings in a magnum volume guarded by monks. Even Beckinsale’s high tight corset doesn’t make up for that annoyance.

Dracula is trying to drain Frankenstein’s monster for the juice that will sustain his bat-babies. (Don’t even ask; I guess since Friar David read this plot from a medieval hand-drawn Bosch-esque magnum volume guarded by monks, it must be credible.)

A lot of work was put into this lavish production – most of it done by those computer nerds we take for granted – but Dracula himself is not selling me. Being fey is not a downfall when playing Dracula, but Roxburgh is not even selling the fey – only when he becomes a computer-nerd-created monster to battle Wolverine’s computer-nerd-created werewolf does he approach any level of monster mash.

And then – it was a graveyard smash!