In a town square in Salamanca, Spain, during a public address, the American President (William Hurt), is assassinated. In the ensuing furor, two bombs explode… 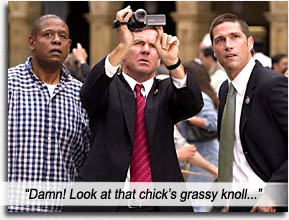 And we roll our eyes: coulda seen that coming – the president was launching an initiative on counter-terrorism.

VANTAGE POINT relates the tales of various players and onlookers in this incident and how they figure in piecing together what happened and whose little red wagon needs to be fixed.

Like a mini-RASHOMON, VANTAGE POINT reverses every ten minutes and starts the story again from another person’s Point Of View, revealing a tad more of the overall gag.

First, it is the American Tourist with de rigueur vidcam Point Of View (Forest Whitaker, doing his characteristic Big Dumb Galoot); then it is the television news producer’s P.O.V. (Sigourney Weaver); then the Secret Service Guy Who Took a Bullet for The Big Guy Last Year (Dennis Quaid in Constant Trepidation Mode); then it’s the Euro Femme Fatale’s Point Of View (Ayelet Zurer), intrigue following her through the crowd like men’s eyes following her ass cheeks… as each piece fits into the puzzle, it all starts adding up to a steaming pile of ambivalence.

The numerous subplots involve a kidnapped brother, a traitorous Secret Service guy, Dennis Quaid’s character being passed over as one of the president’s men and his subsequent unwitting rescue of POTUS; there is an exciting and well-directed car chase through crowded Spanish streets (with no one getting hurt in this Bizarro World – I say, make the chase scene pop by hitting people out of the way like dolls); and there’s even a presidential bait and switch, followed by a presidential kidnapping.

Released early 2008, one thing this film brings to light is that you don’t really have to kidnap the American president to execute a war of terror. Firstly, because the American president is better at spreading terror throughout the world than any unfunded jihadist factions; secondly, because the technology the bad guys use to assassinate the president’s double and then kidnap him is more potent than holding the president hostage, which will achieve nothing.

It wraps a little too neatly, with all the bad guys dead and all the good guys not dead.

VANTAGE POINT is one of those films where the misdirection makes it seem like the film has direction. Oh, it’s well-directed by Pete Travis and the storylines are solidly intertwined by first-time writer, Barry Levy, but it falters when the president is revealed merely watching his double get shot from a vantage point (cha-ching!) in a nearby building. Hey! No fair! When I see the president get shot, I want it to be the real guy!

I guess that’s just MY Point Of View.