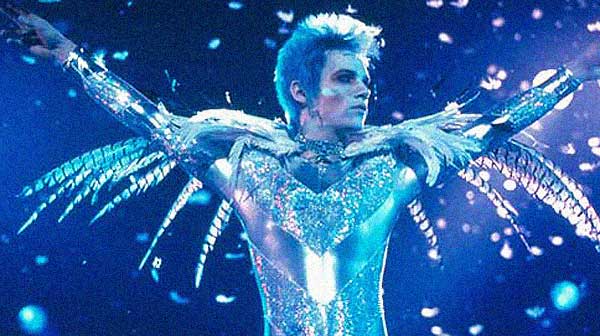 “Who is this ‘Ziggy’ you keep referring to?”

…Your poison doesn’t hurt me, no
Tender wine disguised in a milk-fat fair kiddie show.
I’m here to celebrate the one below
At last I’ve heard from good God above
As the slap on my ass by a lipstick-kissed elbow glove…
– “The Ballad of Maxwell Demon,” Shudder To Think.

A true songwriter would give his left testicle to smackdown lyrics as creamy. And VELVET GOLDMINE – a diabolical, Bowie-esque, Wilde-ian fantasm – veritably pulsates with this species of lascivious mind-painting.

Poffy Stardust and the Vegetables from Venus

Not for the musically squeamish or 70s-phobes, the more familiar you are with David Bowie and the glam slam he was largely a part of and responsible for, the more tongue you will afford VELVET GOLDMINE. Being alive and licking during the 1970s is the best symptom for maximum sensory affinity; failing that, if your bag is Iggy Pop, T-Rex, Brian Eno, Lou Reed and the Velvet Underground (matter of fact, any glam-stroked band, from The Sweet, to Slade, Kiss, or Alice Cooper) GOLDMINE will slide into your Velvet just fine.

Written by James Lyons and Todd Haynes and directed like a wet dream gone horribly right by Haynes, starring the cyanide-intense Jonathan Rhys Meyers (as the Bowie analog, Brian Slade) and dangerously sensual Ewan McGregor (as Iggy analog, Curt Wild), GOLDMINE is a celebration of a period that was surface Pop over layered Tart, expressed through raucous colors and pungent pan-sexuality in the form of the musical idiom we now call glam rock; a story of teen alienation and decibeled angst, of clutching belief in a lifestyle that seemed like a destination but ended up merely part of a longer journey. The underlying message in GOLDMINE was espoused by Bowie himself in his prophetic Changes: “Ooh, look out, you rock n’ rollers! Pretty soon now you’re gonna get older!”

GOLDMINE’s success is in its evocation of the period – glam-struck London of the early 1970s – and its poignancy depicting the alienation of an insecure rock fan as he tries to be as Out There as the In Crowd. Around these backdrops, the larger story of the superstar elevated to messiah is woven.

Spearheading the androgynous attack on social mores is enigmatic Brian Slade aka Maxwell Demon, who fakes an onstage assassination at the height of his popularity. We follow reporter, Arthur Stuart (Christian Bale), in a CITIZEN KANE-like hunt for Slade’s whereabouts a decade after his decline. 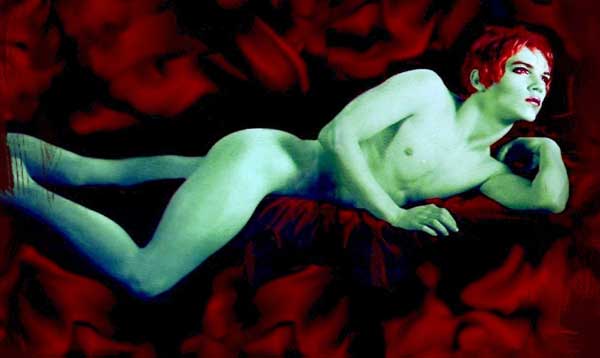 They call him the Diamond Frog.

The young Arthur (also played very convincingly by Bale) is the outcast teen who cannot assimilate into the glamster crowd he so desperately feels kinship with; finding no respite at his parents’ home either, he turns to the glitter of glam for comfort. At one point, young Arthur, while quietly watching a Slade television interview with his parents, fantasizes that he jumps up, points to Slade and shouts at his parents, “That’s me, that! That’s me!” The reality is: no matter how loud he were to shout, his parents will never hear him. From his room postered with rock idols from ceiling to floor; to the way he turntables The Ballad of Maxwell Demon album and excitedly commences reading the record jacket, to the manner in which he felt kinship yet alienation with his own kind, down to his parents being utterly unable to communicate with him, *I* felt like jumping up and yelling at the GOLDMINE screen, “That’s me, that!”

In more subtle and striking ways than can be recounted here, VELVET GOLDMINE is a homage to CITIZEN KANE (from its back and forth chronological structure; to Arthur interviewing Slade’s ex-wife in a bar and one of Slade’s acquaintances in a wheelchair), Oscar Wilde (living the lifestyle and quoting him passim, “The first duty in life is to assume a pose. What the second duty is no one yet has found out.” “Nothing makes one so vain as being told one is a sinner”), and David Bowie (whose influence extends into the very fibers of the glam mythos itself, the character of Brian Slade alluding to Bowie by his very existence, encapsulating Ziggy Stardust, The Man Who Sold the World, Diamond Dogs, Jean Genie, and even a sly dig at Bowie’s Let’s Dance era – with the name of the film itself being the title of a Bowie B-side). Wisely making the film an insular universe separate from our reality, none of those influences is mentioned explicitly – which makes the innuendoes more interesting to identify and will make the discoveries of their references all the more fascinating to young retro-glamsters.

Even Slade’s Maxwell Demon persona is a reference to physicist James Clerk Maxwell’s thought-experiment creature, which examined scenarios regarding the Second Law of Thermodynamics. And there is a further depth, which the film-makers may or may not have been aiming for: the Second Law deals with entropy – a steady state which is attained when all flow of energy has ceased. Entropy is the “world acting spontaneously to minimize potentials” – a brightly burning star like Maxwell Demon must ultimately burn out. 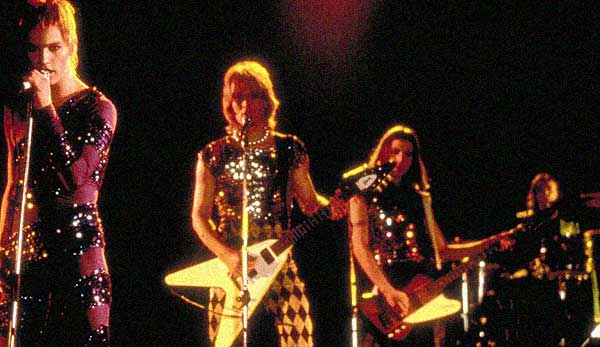 Once upon a future past…

GOLDMINE sears with the genius of its allusions, its opening sequences a joyous primal scream to thwart the demons of conventionality. But – like the inevitable Second Law – its energy is unsustainable. Worse – it makes a bad excuse for its entropy.

It seems more than a tad disrespectful for the film-makers to indirectly laud icons for their impact on the music industry and then make the filmic counterparts of those icons suffer formulaic dramatic arcs of washed-up, burnt-out fates, rather than allow the counterparts the popularity and longevity that the real-life icons enjoy to this day.

Brian Slade is undone by his excesses, and made to endure a Jilted Wife scene straight out of The Actor’s Studio, wherein his pan-sexual spouse suddenly turns on a plot convenience into Mrs. Conservative, simply to comply with the MPAA Hays Code that no excessive behavior shall go unreconciled. She shrikes at him, “You know what your problem is? You get what you want and do what you will.”

Not really a problem, per se. Which proves conclusively that whenever someone deigns to tell you your problems, the most sensible option is to ignore them. 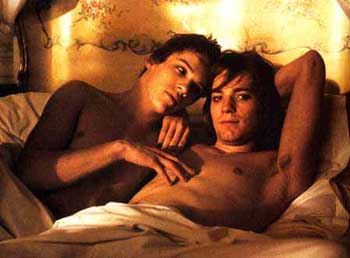 Love everyone. In various positions.

These pitfalls of rock superstardom were wholly unnecessary, only pandering to “normal” people who believe erroneously that success is a harsh mistress. Or maybe just a bitch. A prime example of excess engendering success and longevity and industry clout is the man without whom this movie could never have been made – David Bowie.

Yes, we must all eventually relinquish the “dreams of youth” – but in the rock idiom that does NOT mean relinquishing money and chicks and drugs and pan-sexuality, rather the irresponsibility that those aspects generate. The zenith of success is reconciling all the so-called “excess” elements with your business interests. Once you ensure your income blacks out your expenses, you become a Business Model, a product. Like David Bowie. Like Iggy Pop. Like Roxy Music. Whether you neglect your spouse or spend your nights snorting coke from the butt of a black man in a Mozart wig is irrelevant.

In order to insert these negative messages, the film becomes overlong. (Damn you, MPAA!) Yet VELVET GOLDMINE somehow redeems its negativity by having Arthur discover that Slade’s secret was not that he relinquished his success at all – just his space-messiah persona – swapping his serpentine sensuality for a more sterile, adult-oriented Business Model. In its final scenes, we find the film has been paying attention to its real life analogs and tips its hat one last time to David Bowie, the Grand Master of Reinvention.