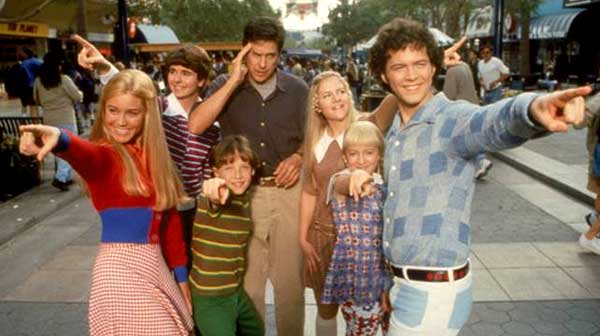 Point to all the people who want to do Marcia!

Makes the best of a bad idea.

Now it’s funny! In A VERY BRADY SEQUEL, the gag of transplanting a 70’s family into the 90s works much better than it did in this movie’s predecessor, 1995’s failed experiment, THE BRADY BUNCH MOVIE.

The satire finds its feet possibly due to new director, Arlene Sanford, who displays a surer grasp of how to convey the irony and coyness of the displaced 70’s ethos, possibly due to the actors being more familiar with their roles and their bellbottoms, possibly because we’ve been beaten into submission by the kitsch. Yeh, that’s it.

A strange man appears on the Bradys’ doorstep one day, Roy (Tim Matheson), claiming to be Carol’s long-lost husband. Believing his tales of high adventures and fighting his way back to civilization, the discombobulated Bradys allow him to stay in Mike’s den for as long as he needs to. We discover soon enough that Roy is an impostor, infiltrating the Brady household to steal a priceless antique – the horse sculpture in the lounge room, near the stairs (you know the one).

In a cold open, we saw the history of the horse’s discovery by two explorers, valuing it at 20 million dollars.

Not knowing of the horse’s value all these years, Carol has donated the horse to a community auction. In a series of misadventures, Roy must navigate the wacky world of the Bradys to keep his sanity before he can even think about chasing down the horse. 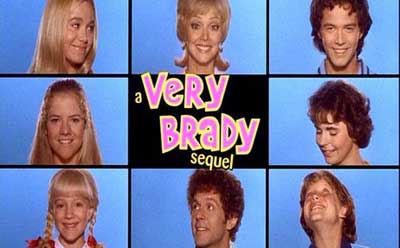 The house that kitsch built.

With the filmmakers’ firmer grasp of the Brady brand, we can now laugh genuinely at the intended fish-out-of-water jokes and the anachronisms. Matheson plays Roy as the voice of the audience, a skeptic who is plainly disbelieving of the Bradys’ naïveté and outdated idiosyncrasies, not taking them at all seriously, and tolerating them for the sake of a big payday.

As with its predecessor, A VERY BRADY SEQUEL is a mashup of many 70’s BRADY BUNCH episodes, with references galore for the superfan, some of which are quite funny as standalone gags: Mike’s ubiquitous sermonizing, building the house of cards, Greg and Marcia sharing the attic (and discovering forbidden feelings for each other! – one of the funnier subplots), Mike’s “Caveat emptor” said at the most inopportune moment, even Jan’s fake boyfriend George Glass. And don’t forget the urban reboot of a familiar lament, when a black girl complains about her sister, “She never gets in trouble! It’s always ‘Moesha! Moesha! Moesha’!”

When Roy kidnaps Carol to Hawaii, well, there’s the impetus for the gang to fulfill some of those Brady refs! There is an unwanted song-and-dance by The Brady Kids on the plane to Hawaii (to the nausea of every passenger onboard), there’s the cursed tiki, the surfing (when Greg is supposed to be “splitting up to look for mom” we see him riding a wave calling out, “Mom, mom!” Very helpful!) only so that Greg can wipe out and have Marcia give him mouth-to-mouth – with an erection joke as stinger!

While Christine Taylor finds that perfect combination of looks, humor and satire for her Marcia, all the other kids are, by degrees, somewhere between annoying and annoying-as-fuck, especially the two youngest (playing Bobby and Cindy), who are even worse actors than the original Bobby and Cindy, yet it is they who discover Roy is a fake, to justify their screentime.

You don’t have to be born in the ’60s to enjoy the BRADY BUNCH movies – but it helps.