The Fat Face of Evil.

Thank you to Satan for giving me inspiration on how to play this role.
— Christian Bale, on winning Best Actor Golden Globes, for the role of Dick Cheney.

VICE is the story of Dick Cheney, following his rise from hell into the White House as George W. Bush’s vice president.

Christian Bale is Cheney, in a jaw-dropping, flab-flopping performance that ranks with the greatest method actors of all time, as he not only captures every inflection of this inhuman pig’s voice and mannerisms, but has gone Full Morbidly Obese for total visual abhorrence.

Beautiful Amy Adams is once again paired with Bale (as she was in AMERICAN HUSTLE), as wife Lynne Cheney, also doing her role horrific justice. I mean, you had to be a sociopath to marry that piece of dogshit in the first place, right? When her husband is called to be the VP, she would maintain “it’s a nothing job,” which may have been the catalyst behind Cheney making it, for him, an everything job. 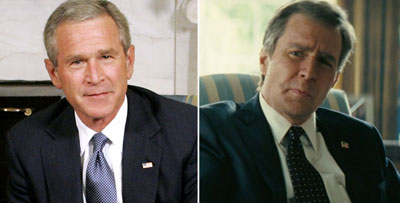 One of these men played a fake pilot, because he’s a great actor –
the other is Sam Rockwell.

Except for LisaGay Hamilton as complicit Condi Rice, most of W’s cabinet are laughable casting choices, with varying degrees of credibility; they’re not necessarily doing a bad acting job, but to appear alongside Bale (immersed as he is in the pagan soul of the terrorist sociopath swine Cheney), even their A-game only raised them up to Bale’s pudgy knee level. In a sense, this movie shoots itself in the foot by starring Bale – no one could hope to match such authenticity!

Steve Carell as Donald Rumsfeld is entirely miscast, devoid of “Rummy’s” graveled voice and contemptuous condescension; doing a good acting job, but acting nothing like the murderer of America’s troops in Iraq. (“But there are also unknown unknowns—the ones we don’t know we don’t know.” America let this mongrel get away with talk like this, as if he was sane.) From this movie’s account, Rumsfeld was well above Cheney in rank when Cheney first dipped his demon toe in politics – in fact, it is shown that Cheney and his politico class had the option to choose a party early in their training, and Cheney chose republiKKKan after witnessing a raunchy Rumsfeld speech. It’s true what they say: evil begets evil. 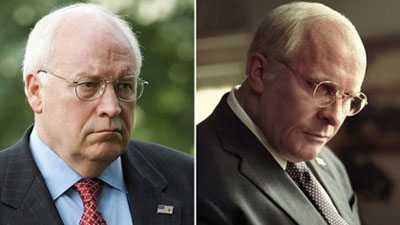 One of these men kills in every role he’s ever had –
the other is Christian Bale.

VICE is documentary meets biography, including a narrator (Jesse Plemons, the young sociopath from BREAKING BAD) with a very “heartfelt” purpose. Opening titles inform us this tale is “as true as it can be, given that Dick Cheney is one of the most secretive leaders in history. But we did our fucking best.” There’s a measure of frustration in that joke. VICE is the moviemakers’ attempt to discover Cheney’s motivation for his penchant to make others suffer, and by the final scene, where Cheney breaks the fourth wall to qualify himself as a savior doing the bidding of the American people by “keeping them safe,” we realize the moviemakers have failed.  No one can find a compelling motivation behind the man’s emotionless cruelty. As Alfred the Butler said, “Some men just want to watch the world burn.”

There is a post-credits stinger which should make some republiKKKans happy (because they will completely misunderstand it), and make democrats laugh (because they totally understand it). I think this movie was termed a “comedy” by the Golden Globes due to the opening and closing being comedic, whilst the meat within was tainted with E. coli.

From the outset, I am not at ease with this movie’s very existence. Written and directed well by Adam McKay (renowned for his Will Ferrell movies), film boasts top-notch talent and production values, however, VICE should have been made with a very different, somber tone, if at all. And definitely not by Will Ferrell’s director.

Though he brought a depth of understanding to the stock market crash in THE BIG SHORT, McKay is not as cutting a political writer as Matthew Michael Carnahan (LIONS FOR LAMBS, STATE OF PLAY), or Stephen Gaghan (TRAFFIC, SYRIANA). This telling needed a darker approach, not to be gleefully reminisced as a time of mirth (W to Cheney, “C’mon, it’ll be fun!”). It was a time of soul-crushing sorrow, illegal wars premised on lies, waterboarding, gaslighting, ignorance, murder of innocents… As it is, it portrays arguably the most loathsome and evil United States vice president in history as an ambitious family man and altruistic leader; it “humanizes” the felon (Cheney playing with his young daughters), when he is demonstrably inhuman (Cheney clinically summoning a team of lawyers to write memos stating torture is not torture), and it portrays his numerous heart attacks as tragic (when, in fact, they were glorious – but not glorious enough, for not crushing that beating muscle closed with extreme prejudice).

Any movie made about someone real is a tribute, no matter what tone it takes. But Satan’s Vagina Dick Cheney deserves no tribute! Not now, not ever! Mocked as “Darth Cheney” while in office, he, and the W administration that he led as a shadow president, are the scum of the Earth. (Sam Seder, political commentator: “Don’t make a movie about this man who created human misery.”) The fact that W, Condi Rice, Paul Wolfowitz, Scooter Libby, David Addington, Liz Cheney, George Tenet, John Yoo et al are still stalking the Earth alive and not executed, free and not jailed for life like Papillon or Billy in MIDNIGHT EXPRESS, is the height of insult to the human species and to all Americans. 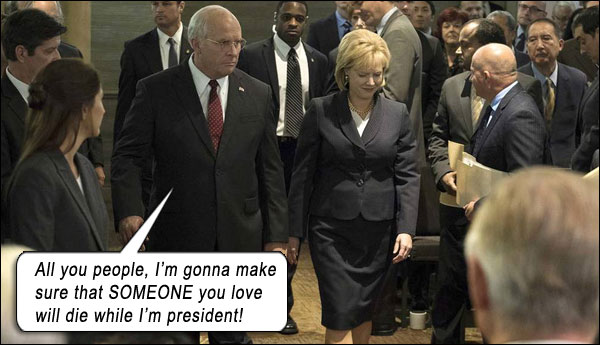 Cheney, through his retarded mouthpiece W, normalized felonies in the highest office, enabling the Dumbo Donald administration to fuck America 100 times worse than they did. Movie portrays quite explicitly that Cheney and W hashed out an agreement whereby Cheney ran actual policy and W would suck on Cheney’s black teat from behind the façade of the presidency. (In the War Room during 9-11, we see the stunned looks on cabinet members’ faces as Cheney – not W – takes command unerringly and unquestioned.) If it were not for Cheney and his anti-human policies and aggressive pursuit of war in foreign countries to benefit his offshore oil holdings (in direct contravention of the Emoluments Clause), thereby willfully getting American troops killed under false pretenses (abrogating the Oath of Office to keep Americans safe), there would not have been a black United States president! In a country this racist, just imagine how badly an administration had to fuck up to compel its citizens to vote against their own sordid xenophobia!

As the world becomes more confusing, we tend to focus on things right there in front of us, while ignoring the massive forces that actually change and shape our lives…
— Narrator, VICE.

Affiliated with Big Oil, Big Pharm, weapons contractors, the National Rifle Association, fracking corporations, Blackwater – everything unholy that is detrimental to peaceful, educated, elevated society – Cheney (who never did cut ties with his position as CEO of oil giant Halliburton) and the republiKKKans are portrayed as the opportunist cannibals they are, their felonies committed in plain sight while feeding America reality shows and sex tapes. We cannot even imagine the felonies committed behind their veil of secrecy (quick shots of Abu Ghraib, torture scenes, to remind us).

When Dick and Lynne discover their youngest daughter Mary (Alison Pill) is a lesbian (which, as we know, is contra to republiKKKan policy), Dick dispassionately offers his support, while Lynne makes a face like, “What will our friends think?” Later, when their eldest daughter Liz (Lily Rabe) runs for a republiKKKan office, vilifying the LGBT community as policy, Dick lends his imprimatur to her campaign, throwing Mary under the bus for the sake of gaining political power.

Cheney ends his final monologue to the camera with, “I will not apologize for doing what needed to be done so that your loved ones could sleep peacefully at night [killing women and children in foreign lands and torturing American citizens without trial]. It has been my honor to be your servant [when he clearly served his own fiscal interests]. You chose me [no, we didn’t], and I did what you asked [we didn’t ask].”

A title card ends the film: “In the year following the terrorist attack, stock in Halliburton rose 500%.”