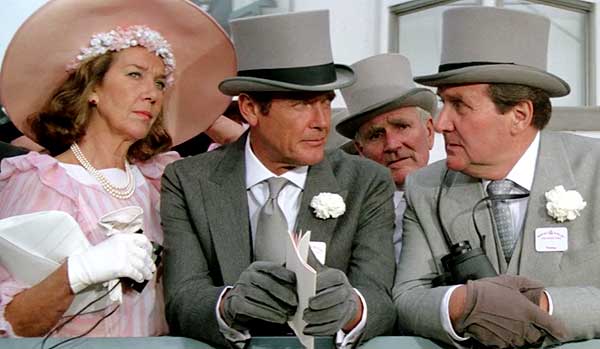 All the buds together, one last time: Lois Maxwell, Roger Moore, Desmond Llewelyn, and even Patrick Macnee, the Watson to Moore’s Holmes.

A View To A Stuntman.

57-year-old Roger Moore finally ages out of the Bond franchise, in his seventh and final fling as James Bond 007 in A VIEW TO A KILL, a movie that could easily win the prize for The Stuntman Most Looking Not Like The Star.

The title is from the Ian Fleming short story From a View To A Kill (published in the 1960 collection For Your Eyes Only), but does not follow the Fleming plot, rather, screenwriters Richard Maibaum and Michael G. Wilson somehow plagiarize Lex Luthor’s plan in SUPERMAN (1978) to destroy a land mass in California by detonating the San Andreas fault. In this instance, the villain wants to sink Silicon Valley and corner the market on microchips. The plot of GOLDFINGER also comes to mind (cornering the market on gold by making all the gold in Fort Knox un-usable).

With rudimentary computers of the day not yet mass-produced for domestic use, the filmmakers would not realize how childish their plot was: entrepreneur Max Zorin (Christopher Walken) aims to end Silicon Valley’s dominion over microchip manufacture and distribution, cutting a deal with heads of world industry that HE would be the sole microchip maven. It’s a scene not unlike GOLDFINGER, where a diorama rises from below (showing San Francisco’s Silicon Valley) and all Zorin’s guests are amazed like the bad actors they are. But the grand plan reads as ridiculous to us modernaires, because we know Silicon Valley is only an inventor’s paradise, and drowning all the property and people there will not guarantee you become the only marketer/distributor of that tech, as that tech is promulgated around the world. Even back then, designs and distribution companies for that tech would not have all been crowded together in that one space, but in numerous physical locations around the globe. [smh] – those olden days people…

Another cold open involving skiing, with James Bond (Moore) being chased by soldiers; magnificent stunts and stupid rear projections, then, as Bond snowboards down a cliff like a total boss brah, cue the Beach Boys’ California Girls – a moment just as cringey as Pierce Brosnan para-sailing that wave more than a decade hence…

Bond rendezvouses with a submarine captained by a stunningly beautiful blonde (Mary Stavin). And bangs her.

Into opening credits and the feeble Duran Duran song, View To A Kill, the only Bond song to reach #1 on the U.S. Billboard charts, illustrating the population’s execrable taste in music. Duran’s bassist John Taylor reportedly asked producer Albert Broccoli at a party, “When are you going to get someone decent to do one of your theme songs?” Well, there was already Wings, Carly Simon, Tom Jones, Shirley Bassey and Nancy Sinatra; I mean really, the arrogance of this new romantic unformed child – putting himself above Wings?! So we assume Duran got the job, with their synthesizer orchestra stabs and Simon Le Bon’s out-of-tune yodeling, because Broccoli once again couldn’t get someone decent…

To Paris, Bond’s spy agency MI6 tailing Zorin, all attending a festive horse race – secretary Moneypenny (Lois Maxwell), weapons expert Q (Desmond Llewelyn), leader M (Robert Brown) and Bond. In a pink outfit way too youthful for her advanced years, Maxwell, who thought she was going to be replaced with the Egyptian-eyed hotness from the last film, manages to hang on to Moneypenny until this film, Moore’s swansong, being told by Broccoli that this was her definite last; she harbored designs on being promoted to M – but it’s a man’s world. (A female M is a decade away, in Brosnan’s GOLDENEYE.)

Q’s only featured invention is a small radio-controlled spycam robot, that would only come into play as the last gag in the film.

The gang meet Tibbet (Patrick Macnee, from SHERLOCK HOLMES IN NEW YORK 1976, where he played Watson to Moore’s Holmes); there is a fun undercover interplay between them, as Bond makes Tibbet perform menial tasks as his “personal attaché.”

He’s either the ugliest man in the world or the scariest woman in the world – Grace Jones is Zorin’s right hand man—uh, woman?—uh, assassin, called May Day. Bond tails him/her up the Eiffel Tower, where s/he jumps off the top with a parachute (reminding us of Franz Reichelt, the inventor who tested his parachute design in 1912 from the first platform of the Tower – and died trying). Bond tails May’s parachute in a car that keeps being chopped smaller and smaller.

Bond infiltrates Zorin’s horse show under an alias, James St. John Smythe, for which there is a running gag about the pronunciation of “St. John” (pronounced as “sin-jin”) – but I gotta ask, and maybe this is cultural ignorance on my part: What is it with Britain’s ass-over-tit pronunciation of Saint John?! 1994’s FOUR WEDDINGS AND A FUNERAL also has a whole bit dedicated to this gag. WHY is “sin-jin” the correct way? And if it is, WHY aren’t British people aware of it? Long discussion, another time…) No matter the alias, Zorin blows Bond’s cover almost immediately with his new-fangled device called a computer, exhibiting a futuristic function which would actually turn to reality soon – facial recognition technology. (Apparently the real life CIA were so impressed, they got to work to make it a reality after seeing this film.) Of course, knowing there’s a spy spying on you doesn’t prompt a Bond Villain to simply shoot the spy in the head, and we must suffer through a drawn-out series of misadventures of Zorin trying to make Bond die as circuitously as possible.

After a silly steeplechase where all the other jockeys/henchmen try to kill Bond via horseback, Zorin reveals he knows who Bond is, to which Bond gives that same hubristic warning that if he doesn’t report back to base, his agency will retaliate. Zorin has the creamiest retort, that every Bond Villain should have used since DR. NO: “If you’re the best they have, they’ll more likely try to cover up your embarrassing incompetence.”

Oooo, what a burn, Zorin! Pwned!

Walter Gotell is shoehorned into the plot, reprising his Russian General Gogol, who threatens Zorin, “No one ever leaves the KGB!” There is some kind of “enhanced steroids” sub-plot and Gogol intimates Zorin might be a “creation” of the KGB; it’s all apiece with Zorin’s horses being able to run faster and jump higher, and May Day is also alluded to as enhanced. This thread goes nowhere. Otherwise, why couldn’t Zorin defeat Bond easily in hand-to-hand during the climax, or hold his own weight to stop himself from falling off the bridge? Well, Bond writers are notoriously inconsistent…

Tanya Roberts (the last CHARLIE’S ANGEL, and Playboy Bunny October 1982) is geologist [snigger] Stacey Sutton, ten times more luscious than the opener blonde. That’s why she can totally play a geologist. Her acting chops are inversely proportionate to her blondeness. Zorin has offered her money for her land, but she won’t sell due to reasons given during bad line-reads. Bond’s stuntman helps her drive off Zorin’s goons, then Bond doesn’t sleep with her.

As per Moore’s autobiography (My Word Is My Bond, 2008), he felt there was no onscreen or real-life chemistry between he and Roberts (he was older than her mother!), and I guess director John Glen felt that way too, as Bond is kept pretty hands-off the goods, except for a badly-staged fire rescue where, for some strange reason, Stacey loses the use of her legs, and Bond must carry her down the fire engine’s ladder (all we can think is: this poor old man’s stuntman!); and then the last scene, where we see them very briefly in a shower through Q’s spycam. For some reason, there’s an idiotic chase scene where Bond and Stacey escape arrest by stealing a fire engine and Bond goes climbing unnecessarily out on the speeding engine’s ladder because someone musta told John Glen you could squeeze comedy out of that predicament. 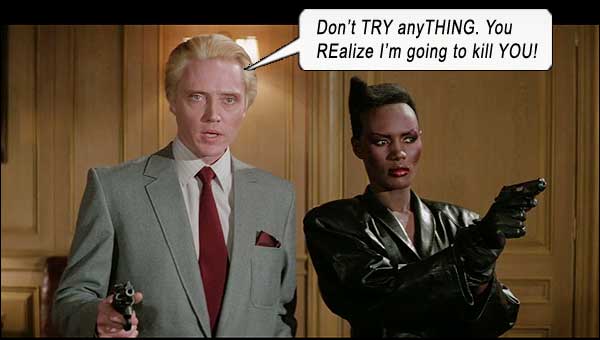 In his book, Moore also revealed a dislike of Grace Jones. Nonetheless, to escape being found out, Bond finds he must bang May Day, and if you think that’s gross, imdb Trivia reports that during the mock fight scene between May and Zorin, a freeze frame will reveal a snatch of Grace Jones’ pubic hair. (I promised myself I wouldn’t hurl.)

Bond and Stacey infiltrate Zorin’s mine through the cunning use of stealing miner’s uniforms – luckily, Stacey found one with a snug pearbottom fit. Zorin proves his insanity by arbitrarily machine-gunning all these workers who have planted the charges to blow the tectonic plates for him. (Moore was against this scene, as it took the “fun” out of Bond movies and replaced it with real clinical psychopathy.) May turns against Zorin when he buries her also in the mine, “I thought that creep loved me!” She allies with Bond and goes out in a poignant sacrifice.

Zorin kidnaps Stacey and escapes in a zeppelin, and heads toward the climax at the Golden Gate Bridge. Of course, the villain HAS to kidnap the damsel in distress otherwise how would we involve all three principals in the final scene? The iconic fight on the cables, reproduced in the movie poster. This is when process shots work best, as static shots – as we see the San Francisco Bay stretching out under Bond and Zorin.

Ultimately, it’s an inauspicious end to Moore’s run as James Bond; as Bond and Stacey soap each other up, we can almost hear Q as he spies their final shower shot, “Oh, grow up, double-oh seven!” He did, Q. He did.