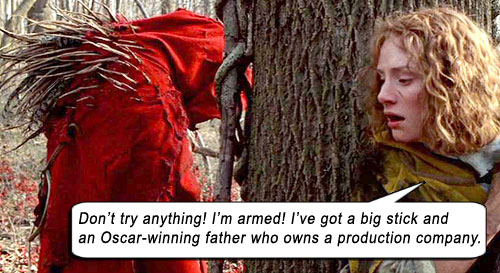 Mythed it by that much.

The people of an Amish-styled village share an uneasy truce with the mysterious beasts that haunt the surrounding woods – until a blind girl courageously braves the woods on a mission of mercy.

The people of Covington lead an idyllic Old World existence, yet are constantly reminded of the red-hooded beasts that stalk the surrounding Covington Woods by the occasional small animal found gutted near the tree line. The color red is banned in the village, as it attracts “Those we do not speak of”; yellow repels them.

But THE VILLAGE is not about the beasts – it’s about the village people. (Oh no I di’int.)

The beauty of THE VILLAGE lies in its quietude. Though it is a mystery thriller, the thrills come not from running and screaming and jump-scares, but rather from shading in each character right before our eyes; quiet scenes of how each person is affected by the indoctrination to their bucolic lifestyle and its underlying menace, how each character yet finds someone to love within that frame, and how each is longing for something which their repressed existence keeps tantalizingly just out of their reach. The beasts and twists are just gravy.

At this juncture in writer-director M. Night Shyamalan’s career, he was already being irrationally vilified for making crap movies – and he wasn’t making crap movies yet! (That would come later, with THE HAPPENING (2008) and THE LAST AIRBENDER (2010), where we could almost see Night throwing up his hands in frustration: “You people just don’t appreciate what I’m trying to do! Okay – here’s some REAL shit!”) Here, Night is still adroitly creating a unique moviegoing experience, albeit with less of a surprise jolt than his opening stunner THE SIXTH SENSE, but with as much cinematic power.

The problem with THE VILLAGE lies not in THE VILLAGE, but in jaded humanity.

Night is a storyteller for another age – THE VILLAGE is unhurried, controlled, lovingly constructed from whole cloth, with brilliant staging, intriguing storyline, poignancy, humor, moving soundtrack, layers of chills, and many surprises along the way. But you just can’t please some people… 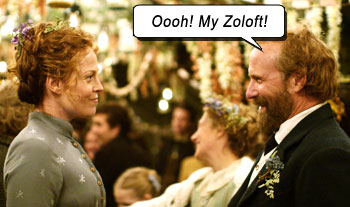 Ivy’s blindness necessitates her hands being held out. Thus, there is always the visual cue of hands thrusting out for different reasons, grasping for friendship, for enlightenment, for safety. The hand motif is extended to romance: When Ivy tells Lucius, “We used to hold hands all the time, and you stopped,” he replies, “Sometimes we don’t do things we want to do, so that others won’t know we want to do them.”

Later, Lucius would tell his mother Alice (Sigourney) how Walker (Hurt) feels about her: “He hides his feelings for you.”

Alice: “What makes you think he has feelings for me?”
Lucius: “He never touches you.”

Lucius is proven right at a wedding, when Alice puts out her hand to shake Walker’s and he pointedly doesn’t take it, while talking to distract. She walks away, looks back; he is shaking the next woman’s hand. Whereas most would come away from this encounter rejected – Alice is beaming!

One night the warning bell sounds: the beasts are in the village. Ivy waits in her open doorway, her sister (Judy Greer) fearfully calls her to the cellar – but Ivy believes wholeheartedly that Lucius will “come back to make sure we’re safe.” We see her hand reaching into the darkness. In the distance, out-of-focus, a red-hooded beast approaches. From out of frame, Lucius’s hand! Crash to slomo, cue baroque violin, romantic desperation, as he runs with her to the cellar one step ahead of the beasts. A shot of their hands clasped tightly. In the cellar, she notices their hands are still entwined. Well, that’s his left hand. Where’s his right hand? Oh, you beast!

Later, at the wedding, when the warning bell clangs, though Ivy is amidst the dancing throng, though she is with a stranger, though Lucius is nowhere to be seen, she throws out her hand again – this time, we share her confidence, knowing Lucius will always be there to take it and lead her to safety.

On a quiet night, ominous fog in the distance, Ivy joins Lucius as he sits on her porch, protectively. She tells him she can “see his color” when he is near. The simple question, “Why are you on this porch?” opens a floodgate of emotions from both of them. Keep in mind, neither of them have admitted to loving each other, they have not yet even shared a kiss, yet she boldly asks in a crystalline whisper, her unseeing eyes in his direction, “Will you dance with me at our wedding, I find dancing very agreeable.”

When shy Lucius circuitously avoids the answer, Ivy asks, “Why can’t you say what is in your mind?” He retorts, “Why can’t you stop saying what is in yours?” Yet his long tirade ends with, “That is why I am on this porch – because I fear for your safety above all others,” and “Yes, I will dance with you on our wedding night.” An exquisite roundabout exposing cautious love. When they lean in to kiss, the camera pans slowly to a rocking chair on the porch, as if affording them privacy.

Now you might be thinking, Has Poffy lost his mind dwelling on this inane chickflickery? It’s not the content, it is the creative way it is revealed to us – like a flower opening, rather than an anchor dropping. This scene’s ultimate aim is to provide motivation for Ivy in her quest (and to make young girls swoon), but few moviemakers would take the time to build this temple so sweetly.

And when it comes to more somber fare – like stabbing – Shyamalan proves he doesn’t need any scuffling or screeching violins to once again craft a thing of cinematic beauty. Village Idiot appears at Lucius’s door the next day, looking sad. Lucius is in a state of bliss (last night – first base – woohoo!), yet sorry for Idiot, because he knows of his childlike infatuation with Ivy. Lucius leads Idiot in, trying to console him with talk of “There are different types of love–” He turns while he talks, stops, looks down. A bloodied knife is being extracted slowly from his belly, held by Idiot in soundless tears. His eyes glaze. He falls. Idiot flees in anguish.

As if the magnificent construction of that scene was not enough, Ivy’s discovery of the wounded Lucius is just as meticulous. Night’s regular composer, James Newton Howard, scars the soundtrack with a noisome subliminal drone as blind Ivy appears at Lucius’s door. All we see is Ivy in the distance, out of focus, camera mounted above a table in the foreground, Lucius’s body at the foot of this table. She clambers closer, hands out, calling his name desperately. As she comes into focus, her goal is also coming into focus. When her foot hits his body, the drone ceases – and she is in total focus. Everything is clear. She screams that she “cannot see his color!”…

The whole movie is made with this same stunning eye for direction. Even if you do not like the man or his movies, there is no doubt the movie-crafting gene is somersaulting through his veins.

This is why it takes me longer to review good movies than execrable ones – because I must convey the art-maker’s intent faithfully to the loveless masses. Whereas when moviemakers don’t give a fuck, it doesn’t matter in the least how or why I write about their movie, because I know they care even less about whether they’re being represented faithfully than about the haphazard slapping together of their shite in the first place. 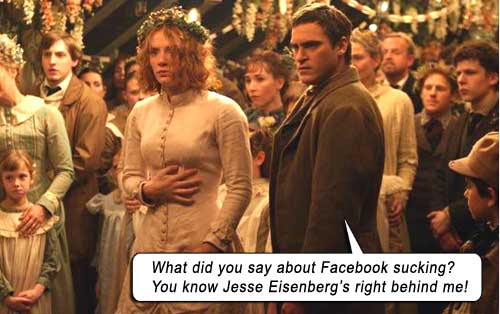 We learn that these people are modern (that is, they’re not from the 1800s and they’re not Amish). Their exile is self-imposed by the elders after searing tragedies befell them in outside society – loved ones meeting their deaths for unnecessary reasons. Their disavowal of the complications of modernity has its price, as the story opens with the burial of August’s baby; a baby that might have been saved had it received the correct modern treatment. We meet Lucius as a quiet, sober young man, regarded well amongst the townsfolk, requesting to go into “the towns” to retrieve “medicines” so that this might not happen again. The council, headed by Walker, refuses.

When Lucius is struck down, Walker rationalizes that it was not a natural order of things, so when Ivy requests to do the same thing for Lucius, she is allowed to go. And the blind shall lead…

Walker then exposes the secret of the beasts to Ivy… A secret that will allow her to make the journey through the forest – but the dangers are not those that she feared. They are much more real and much more urgent – brought to life by human desire.

The performances in this movie made Night’s later movies unbearable. They are – that – damn – good. How could the one-note Mark Wahlberg or the bug-eyed, half-trick pony Zooey ever hope to compete?

The perfect metaphor for audiences missing the point of this movie is contained within the movie itself: Lucius confesses to the council that he experimented and crossed the tree line into Covington Woods. Walker comes to him, tears edging both their eyes: “Do not fret. You are fearless in ways I can never know.” And he’s NOT talking about going into the woods – he’s referring to the CONFESSION. In other words, the same William Hurt dialogue carries two meanings: a prosaic meaning for the Great Unwashed, and a deeper meaning for those who can think and spell.

So too, we all go into this movie believing the same myth of the beasts as the village people (even the Macho Men), but as the elegant tale progresses, the need for the beasts is negated – yet there are some doughboys still waiting for blood gouts like Bellagio fountains. They’re watching the same movie and not hearing what William Hurt is really saying. (It doesn’t help that all the sensationalistic trailers scream monster slasher Jason Freddie Halloween.)