I feel like vomiting and I’m getting a headache and maybe even diarrhea. I’ve either got a virus. Or I’ve just watched the movie of the same name. 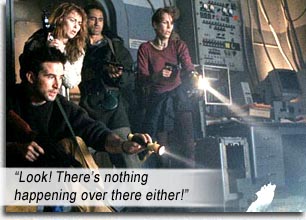 But here’s the twist. VIRUS isn’t about some little animalcules that infect your blood and make your nose run. It’s about an alien entity that uses electricity for energy and overruns a Russian science ship, trying to wipe out the invasive disease onboard the ship – Man! A twist almost as meaningless and devoid of scientific credibility as midi-chlorians creating The Force.

A ragtag salvage tugboat crew stumbles upon a deserted Russian vessel in the middle of the ocean, and see an opportunity for millions of dollars in salvage. Donald Sutherland is the tugboat’s slightly mad captain (who seems to be wondering how to be an actor in this movie that does for actors what Watergate did for politics), Jamie Lee Curtis is the big-chested navigator; tug crew include Maori legend Cliff Curtis, wackjob legend Marshall Bell, and acting legend William Baldwin.

They find one human survivor (Joanna Pacula) and a huge machine that constructed itself from wires and steel (and still looks like one of those ultra-muscled supervillains from Marvel Comics, with a “head” design stolen from Jeff Goldblum’s THE FLY) and is trying to kill them. Dull chase movie ensues.

We are tempted to call this anthropomorphized villain a “robot” but technically it is not – the word “robot” is derived from “slave” and denotes forced labor; this thing has a voice like Darth Vader and is no one’s bitch.

Jamie Lee Curtis on the other hand is the demographic’s bitch. Her miscast role is like Hillary Swank’s in THE CORE or Radha Mitchell’s in PITCH BLACK – a hot woman thrown into an all-male crew to keep the 15 to 25-year-olds mildly interested. Yet she never once let’s the 38Ds out for air – so what’s the point? And though the sexual tension is anemic, we would still expect onscreen spittle to fly with the All American Male – Acting Legend William Baldwin – yet the closest they get to lying on top of each other is strapping themselves to a rocket sled and escaping the waste of time the moviemakers call the plot.