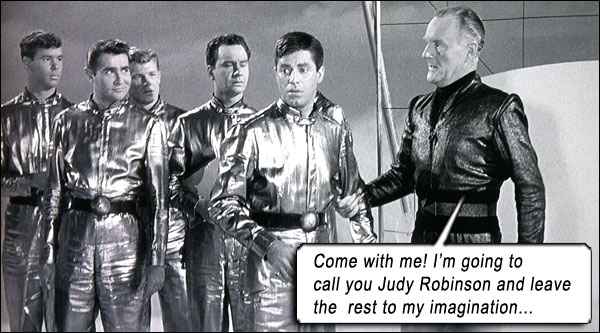 The Shrinking of Gore’s PLANET.

There are parts in VISIT TO A SMALL PLANET where Jerry Lewis astounds us with his physical art, yet that is not enough to save this attempted comedy from an atrocious script that exudes astronomical ignorance, and by that I mean: ignorance in astronomy… or maybe, also…?

Jerry is Kreton, from an alien race that lives “on the other side of the universe” (whatever that means), who revels in visiting Earth against the orders of his supervisor, Mr. Delton (John Williams – not the composer, just an old That Guy). On this particular visit, Kreton befriends a middle-American family and stays with them a few days, with the approval of Mr. Delton, on the proviso Kreton only studies them and doesn’t get involved. But Kreton starts helping the family with his omnipotent alien magic, and seemingly gets entangled romantically with the daughter, so Mr. Delton removes Kreton’s powers. It’s played as “a lesson to Kreton” to show him how painful it is to be an Earthling – but Kreton never once wished to be an Earthling. Unless I missed something.

Also, Kreton maintains all love and sex has been excised from his species, so how does he end up desiring the family daughter Ellen (Joan Blackman)? Or is it a simulacrum of desire that he cannot comprehend is not real? So many interesting questions never posed or answered. Kreton gets hubristic, thinking “falling in love” won’t lead to any trouble, and that Mr. Delton won’t be the wiser of Kreton contravening his conditions – all while being part of a culture where he KNOWS he can be spied on 24/7 by Mr. Delton, who can intervene with magic at any time. Which Delton does, zapping Kreton’s powers away. And in doing so, causes Kreton’s trouble. Is anyone paying attention to the contradictions? Or did I miss something else?

VISIT TO A SMALL PLANET was originally a Broadway play written by Gore Vidal, which starred none other than Eddie Mayehoff (Jerry’s father in THAT’S MY BOY)! Earning three Tony noms, it also aired as a TV play in May 1955, and was apparently an intelligent satire on Earth’s self-destructive nature and how aliens misapprehend that nature, the tagline being: A visitor from another planet arrives on Earth and seems anxious to provoke a war – “one thing you people do really well”. (Almost THE DAY THE EARTH STOOD STILL, 1951.) Which might explain why Vidal was incensed at Jerry Lewis being tapped for the film version. He knew his concept would be shrunken down to a mere nub of its original intent. But if only Jerry had followed through on his GEISHA BOY introspection and made VISIT faithful to its source material, that might have elevated his cache as a serious filmmaker, and might have saved this confused mess of a dog turd.

Bland, irritating, minimally funny, screenwriters Edmund Beloin and Henry Garson, with director Norman Taurog (who did six other Martin-Lewis movies), scream their inadequacy of astronomy dialect with almost every line of “space” dialogue. In the beatnik bar (which is the most cogent sequence for being so “far out”) someone asks where he can get silver space-duds like Kreton’s, and Kreton replies, “Well, do you know where the Milky Way is?” and points up somewhere. (Daddy-O, you’re IN the Milky Way!) “Well, you turn right at the second nebula” (they obviously don’t have any clue how amorphous a nebula is), “and it’s the third planet at the end of the star cluster.” (Jargon they picked up from an encyclopedia supposed to sound space-y.) To fully deconstruct even this one sentence, we’d have to re-educate the writers from kindergarten: How do we find the third planet past a star cluster if all the stars have planets too? And planets don’t float in arbitrary deep space – isn’t the planet you speak of orbiting a star itself, and doesn’t that make the planet’s star part of the cluster? It’s like Han Solo saying, “It’s the ship that made the Kessel Run in less than twelve parsecs.” Bullshit dialogue that someone thought sounded like legit space jive. Speaking of which, Kreton’s age is “21 million light years” – and we thought Han was the first doofus to confuse distance with time.

As a youth, I was inclined to think GEISHA BOY was a slow-pacer, and now appreciate it for its depth, whereas VISIT TO A SMALL PLANET was a great lark when younger, but now I realize it is purely for kids and non-thinking adults.

Fred Clark is the father (veteran of two other Martin-Lewis adventures), and Lucille Ball’s own Mr. Mooney, Gale Gordon, over-emotes as a scared neighbor. Buddy Rich cameos as a beatnik drummer. 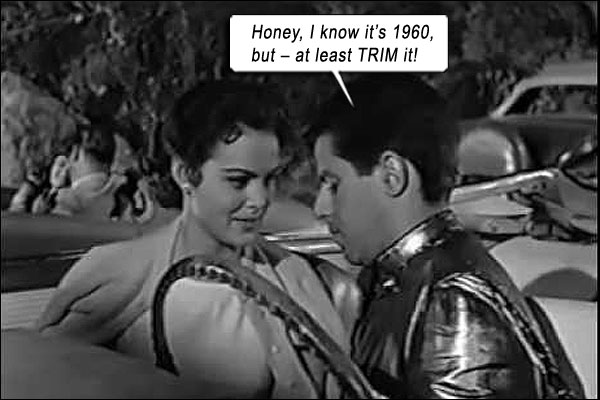 Tangling with her boyfriend Conrad (tiresome, overacting Earl Holliman), on the couch, I did a double-take when Ellen actually said the line, “Conrad, as you may have suspected, I find you sexually attractive. But you just don’t have any money.” In a 1960 movie! With her mother in the room! Also – blatantly coming right out and admitting she’s a gold-digger. With her mother in the room! Also, Conrad accosting her openly and begging to get married, if not, laid – with her mother in the room! Our culture has moved too far for me to discern exactly how inappropriate or not these kids are being, or whether it’s just another poorly-written scene. Later someone says, “We do think an awful lot about sex around here – but it only happens when no one is looking.” Is this a Jerry Lewis movie, or are these lines left over from Gore Vidal?

Kreton’s powers would be a precursor to the Marvel movies that would come 55 years later, where he can do anything the plot calls for, without any rationale: he can time travel to any point in Earth’s history, disintegrate objects, levitate cars, make a camera spurt milk in someone’s face, tune in on people’s thoughts and enable the pets to talk. While he tries to explain some powers, there is no explanation for these others, so why bother explaining any of it? It’s magic who cares fuck you.

For context, this film was one of the first to poke fun at alien beings, or view them as inept pratfallers; released into a movie climate packed with malign extra-terrestrials, like the aforementioned EARTH STOOD STILL, THE THING FROM ANOTHER WORLD (1951), WAR OF THE WORLDS (1953), and INVASION OF THE BODY SNATCHERS (1956)…

When Mr. Delton takes away Kreton’s powers, there is no lesson learned: no pondering on what sacrifice Kreton might have made to retain true love; no yearning on the love he lost by choosing to fly away with Mr. Delton. Just a nothing ending; all he’s learned in his time studying humans, is that he doesn’t want to be without his powers.