You Maniacs! You blew it up! 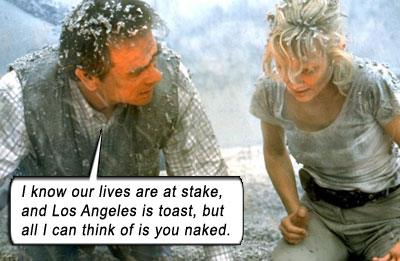 Tommy Lee Jones is the head of the Department for Fixin’ Stuff and Anne Heche is a geologist. In the face of a volcano eruption in the La Brea Tar Pits spewing lava and fireballs over the City of Smug Angels, both Jones and Heche can only run around a lot and bark orders at people on how to divert lava and avoid fireballs, while Don Cheadle sits in the Fixin’ Stuff office somewhere, like he’s in another movie, talking into a headset at Jones and doing his best Concerned Face. Yup, that’s about it.

Sexy profiling action as white cops handcuff a black protester, then release him when they have to move a concrete block to save lives – but the black protester stays, and his strength is the one extra man needed to move the concrete block! Oh, Screenwriting Classes, thou cheeky mistress!

VOLCANO would be the most fun for the people who live here – who recognize all the landmarks and cheer when the efx teams immolate them – from the La Brea Tar Pits to the Beverly Center, from Capitol Records to an Angelyne billboard.

There is the flesh-crawling final scene after the tragedy has been averted and gray soot has settled over everyone, and a small boy remarks, “They all look the same!” Racial Hypocrisy Message received, hypocrites.

Is this really a disaster movie? I think people around the globe would agree, if a volcano blew up Los Angeles, the world would be a better place…