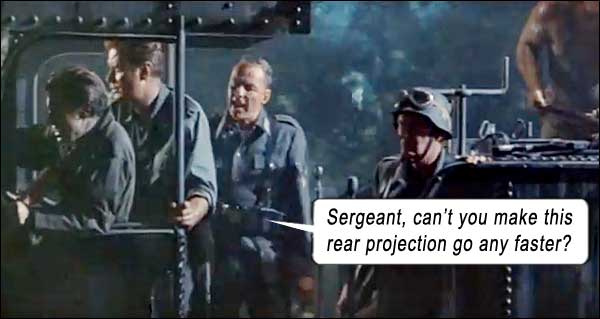 VON RYAN’S EXPRESS is an audacious prison escape movie, an original trinket amongst the morass of World War II movies culled from supposedly “true events.” British and American prisoners of war hijack their own prison train and outrace Germans to the Swiss border.

Colonel Joseph L Ryan (Sinatra) wants to sit out the war in the prison camp, refusing to cooperate with the British POW Commanding Officer (persnickety Trevor Howard) on escape plans and general mischief against their Italian captors, at one point even traitorously revealing an Allied tunnel to their Italian Captain (Sergio Fantoni). At first it seems like a tactic to make the Italians drop their guard, but no, Ryan is dead serious about his girly attitude – to such an extent that he is dubbed “Von Ryan” by his fellow prisoners. (One wonders why he wasn’t christened with an Italian epithet like Guiseppe Ryan or Goombah Ryan.) 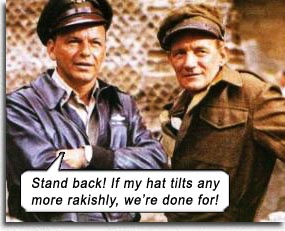 The Italian camp is closed down by the Germans, and the prisoners are loaded onto a prison train to transport them to another camp. Suddenly Ryan takes command like a Chairman of the Board and leads the POWs zealously, in an escape attempt more audacious than any mischievous tunnel. Ryan’s character twist was meant to be a feature of the film – how this disrespected and ostensibly lazy Colonel had to win back the respect of his troops to lead them to freedom, but this actioner moves as fast as the train they jack, and that “redemption” element of the story gets shunted to the background until the film’s blood-pounding climax when we are reminded of the sacrifice and leadership of Ryan, as the men he led to freedom look back on him one last time in tragic respect.

The thrilling chase movie takes us through occupied Italy, through German checkpoints, train depots, air raids; through a daring masquerade as Nazi officers; feverishly past a smoke-blooded temptress that might have served as love interest; onto an Italian engine driver ensconced in Stockholm Syndrome (before it was even invented in 1973!), who helps Frank and friends by diverting the train to Switzerland; to the nail-biting climax, as the train chuffs desperately in and out of tunnels, hugging a mountainside, with a German troop train gaining on it while Messerschmitts dive on it from above.

In the POW contingent, look for Brad Dexter (the unmagnificent one in THE MAGNIFICENT SEVEN), James Brolin (the future Mr. Streisand) and Edward Mulhare (the Hoff’s liege in KNIGHT RIDER).

Though I prefer modern war movies for their visual grit and nuanced political stances (unlike the sanitized, melodramatic war movies released during the actual war or in that jingoistic, paranoid period shortly after it), full marks must go to the writers of VON RYAN’S EXPRESS (novelist David Westheimer and screenwriters Wendell Mayes and Joseph Landon), who penned a unique, straight-ahead actioner that joins the ranks of STALAG 17 and THE GREAT ESCAPE as entertainment that somehow makes us forget the horrors of war even whilst portraying it. (Would that make HOGAN’S HEROES the pinnacle of war videography?)