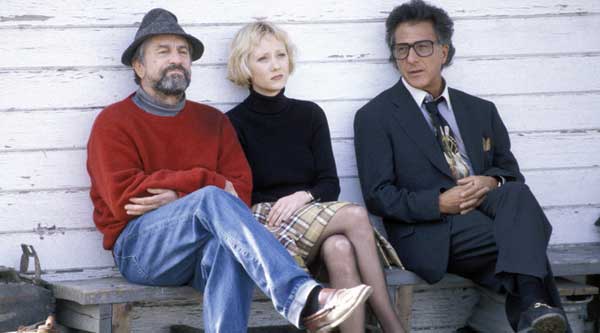 Anne Heche contemplates being the meat in a Legend Sandwich…

War is only real if you let them get away with it. As George Carlin used to say, “Why do the troops keep turning up?” But even if the troops didn’t turn up for active duty, WAG THE DOG is an example of what the government can do with a little false-flag media.

WAG THE DOG is only a movie. It’s ostensibly a “satire” but as Roger Ebert insightfully observes, “It is getting harder for satire to stay ahead of reality.”

The U.S. President in a sex scandal. What can the American government do to atone for it? Not apologize to the public, or make amends, or even try to make the president a better man – but manufacture a fake war to take the focus off him, just two weeks before an election.

He’s termed a government spin doctor in the junkets, but Conrad Brean (Robert De Niro) is what mobsters would call a “cleaner.” (And isn’t the government just a legalized form of thug life?) He makes problems go away. He and the White House PR aide (Anne Heche) manufacture the “war” with Albania (“because no one knows where it is or what’s happening there”) with the help of a Hollywood producer, Stanley Motss (Dustin Hoffman, channeling Robert Evans).

Aided by Denis Leary (facilitator) and Willie Nelson (composing a theme song for the conflict); bringing home a fake war vet, who happens to be PTSD to the gills (Woody Harrelson), and tailed by William H. Macy (CIA).

I’m biting my tongue here on the real life parallels of American government. WAG THE DOG is an allegory of this Orwellian society sometimes called America… where government manufactures crises in order to solve them and pretend efficiency. Like the bailout crisis of 2008; like the debt ceiling crisis of 2011. Who caused them? Not us. Who “solved” them? Not us. But the taxes and fortunes of the oblivious American people were raided by the American government as excuse for the quelling of those crises.

Movie brings together acting legends De Niro and Hoffman, cheekily playing off each other like a devil against an atheist; De Niro’s diabolical twinkle in his eye says, ‘Do right by me or you will burn in a lake of fire’ and Hoffman’s cute obliviousness doesn’t truly believe a lake of fire exists unless he produces the movie about it.

Flooding the media with war images produced by Motss, Brean can safely proclaim to his CIA questioners who doubt the veracity of the war, “Of course there’s a war – I saw it on TV!”

And our minds again wander to the terrifying reality of Orwell’s America: how the Bush admin flooded the media with “news conferences” that they engineered themselves as propaganda to showcase their murderous policies like Shock and Awe, and nonsensical programs like No Child Left Behind; to check off their ever-moving benchmarks in the fake War On Terror; to “prove” their transparency (ironically, by being duplicitous!). It’s not just the felons in the Bush administration; every government finagles the media, but the Bush Klan were so hamhanded and arrogant that they blew it for everyone. Now we know it is common practice to hire PR companies like Burson-Marsteller to “re-brand” activities, entities, corporations, even policies, to repackage lies and malfeasance.

“… the administration’s ambitions to manage the news knew no bounds…”
–Frank Rich, The Greatest Story Ever Sold, writing about Condi Rice’s attempt to keep bin Laden videos out of the media.

In WAG THE DOG, as in real life, they plant “reporters” in press conferences to ask questions that they answer with their spin; they disallow legitimate investigative reporters into their midst for fear of diluting the message; they preclude unfavorable coverage by threatening the news networks with lack of access (i.e. either report the lies or report nothing at all; any “news” is better than no news)…

Released in 1997 (when Clinton was prosecuting his own underhanded wars with little or no media coverage), whether this movie is satire or fact, it is undeniably prophetic, because in 2011, this is exactly how “war” is being prosecuted in America – via the media. Yes, there are ground troops and people dying in Iraq and Afghanistan (what Dubya liked to call “over there”) but it’s less than 1% of the American population who are involved or who know people involved in this political skirmish that has no reason and no goal. America is not “at war” – there are no bombers droning overhead, no blackouts, no rationing, and the only ruined streets and bridges are those that the local governments choose to ignore, choosing to funnel that taxpayer money into their own pockets. For America, war is an entertainment diversion; it only exists on TV.

(On the day I was writing this article, political commentator Lawrence O’Donnell made an observation about how the majority of America doesn’t even realize it is at war: “…a nation where it is impossible to in any way experience a country at war, a nation where not a single deprivation has been suffered because the country has been at war for a decade; a nation where no one has to wait in line for bread or fuel or anything else in short supply because of war…” Full disclosure: it was in a different context, but it corroborates everything I stated above.)

If you plop a person anywhere in America with no access to media, they could live out their life oblivious to America supposedly involved in “two wars” and innumerable illegal skirmishes ‘pon de side. If you did not turn on the news, would you ever know about drone attacks in Libya, or Yemen, or Pakistan? It’s just a frivolous game that politicians think it’s their job to play. Assholes. As Keith Olbermann used to say, “George W. Bush is having a war in Iraq – for the sake of having a war in Iraq.”

As Brean and his associates escalate the “war,” they escalate the lies to unimaginably audacious proportions, the aide constantly wondering if the lies will “take” with the public. Of course they do. When TV talks, people listen.

How many citizens of the indoctrinated United States of America will come away from WAG THE DOG knowing that it was a riotous satire once upon a short time ago, but has turned into a depiction of unethical real life political engineering? Only much tamer.

“A dog is smarter than its tail, but if the tail were smarter, then the tail would wag the dog” = purposely diverting attention away from something of importance, to something of lesser significance, catapulting the insignificant event into the limelight. In other words, creating a “straw man.” Ask any Republican for instructions.