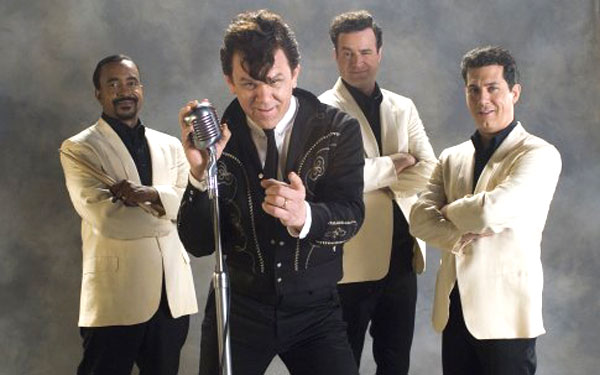 Musicians: this one’s for us.

WALK HARD is not for Guitar Hero fakers or karaoke jackasses or talentless DJs with the audacity to call their fade-ups and fade-downs “mixing.” Let me say it again: WALK HARD is for MUSICIANS; for we who have lived the road, beaten the boards, spanked the groupies, trashed the dressing room, fart-filled the studio, fed the beast our day-job dollar, and slapped the roadies and called them Susan. 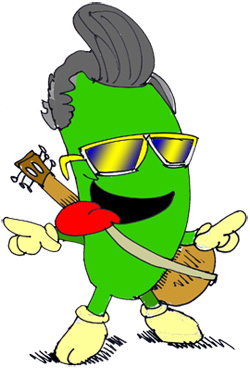 The public won’t get WALK HARD as deeply as musicians will. And I don’t care. Cherish it, Musicians. Hug it and pet it and call it George.

After the two formulaic, Hollywood-drenched biopics, RAY and WALK THE LINE, set the standard and simultaneously lowered the bar for musician biographies, WALK HARD takes every single cliché from those glossy turkeys and parties with a penis in your face.

John C. Reilly is fictional songwriter-guitarist Dewey Cox, who rises to superstardom on the wings of cliché. Cliché so battering and obvious, we will never look at musician biopics with a straight face again, especially those featuring the seminal artists of the 50’s who rose from dance halls to superstardom – Elvis, Jerry Lee Lewis, Buddy Holly. They ALL look like spoof biopics now!

Dewey finds he is talented at a young age, soon after slicing his brother in half with a machete, Monty Python style, who telegraphs the tragedy: “Everything’s fine when you have such a long life in front of you!” Later, Dewey’s father (tough-as-nails Raymond J. Barry) would constantly lament, “The wrong keed died!”

John C. Reilly lives Dewey Cox, performing all his comedic songs himself, which are actually enjoyable and catchy country/rock and roll tunes. We follow him from his big break in a colored club “where people come to dance erotically,” to touring with Elvis and Jerry Lee, to immediate radio airplay with his hit Walk Hard (“recorded just 35 minutes ago by Dewey Cox”). Dewey meets The Beatles (Jack Black as Paul, Justin Long as George, Paul Rudd as John), experiments with musical styles from Dylan to Bowie; on through the 70s he hosts a TV show and marries Cheryl Tiegs (playing herself, taking the name Cheryl Cox-Tiegs – yeah, say it out loud). In the 80s, Dewey succumbs to mind-altering drugs while trying to compose a magnum opus with ethnic orchestras, trampolines, farm animals and fruit. He even takes a leaf from his friend Will Ferrell’s book and runs naked through the streets during a freakout. 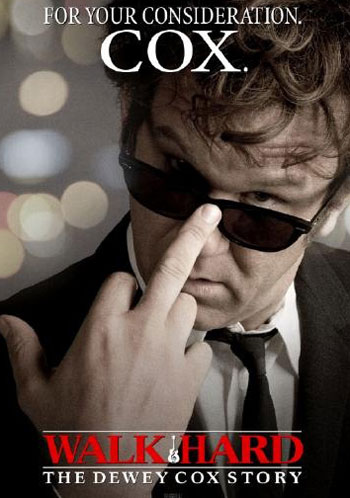 WALK HARD will be compared to the progenitor of this rocku-mockumentary genre, SPINAL TAP, as WALK-HARD’s makers also display actual hands-on, penis-on knowledge of their target.

Writer-director Jake Kasdan and co-writer Judd Apatow ladle out every single vignette that musician biopic screenwriters have grown lazy on – from teens at the dance warming to Dewey’s high school band and jiggling in ways that make a priest yell, “devil’s music,” to the record producer admonishing Dewey then suddenly loving his song (a riotous John Michael Higgins cameo, “…and if somehow you are able to sing a song now with these boys whom you haven’t even met… but I’m telling you right now, I don’t think it’s going to happen… I’ll give you 15 seconds”), to the whining wife in curlers (Kristen Wiig) cradling three babies, constantly telling Dewey he’ll “never make it” – even whilst he is on the road supporting a number one album. With a penis in his face.

Musicians know these scenes from their own lives, and how Hollywood has compressed them to nut-squeezing idiocy. Kasdan and Apatow display a virtuoso’s knowledge of their subject, down to making the instrument-playing look authentic (a pet peeve of all musicians watching musician movies). The script is as taut as a guitar string and sings like a Les Paul plugged through a Marshall stack on 11.

Johnny Cash and Ray Charles would be spinning in their graves – if they were not laughing so hard.

Slap a roadie for me. With your cock.