Blues for The Man In Black. 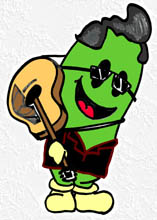 The Cucumber in Black 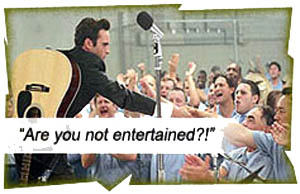 I was introduced to Johnny Cash by my older cousin, via A Boy Named Sue and Cash’s take on being led to the gallows, 25 Minutes To Go. This was before I discovered a boy named Alice (Cooper) and Led Zeppelin’s Gallows Pole, subsequently leading to deserting the previous generation’s outlaws (like Cash and The Beatles) and going all long-haired, ripped-jeaned and anti-socialite. (To scallywags under 30: yes, respected and seemingly harmless icons were once regarded as threatening and subversive.)

WALK THE LINE, though lauded as a Johnny Cash biography – is not. As a movie, formulaic; as a biography, a sordid Behind The Music episode at best.

Focusing on only a short period of Cash’s life (from boyhood until 1968), and then only on Cash’s infatuation with vocalist June Carter, WALK THE LINE paints the prolific and determined young man as a neurotic stalker – of a woman who is seemingly as mixed up as he is (if June’s two failed marriages and intermittent dalliances with Cash are any indication). Who would’ve guessed this Grand Olde Pioneer’s goals and destructive actions all revolved around The Getting Of Panty from Carter? Noticeably missing was the scene where he holds up a boombox playing In Your Eyes outside her bedroom window.

Joaquin Phoenix is J.R. Cash (as Johnny liked to be called) and, though not a physical chameleon akin to the Day-Lewises or Oldmans, is a chameleon in essence, metamorphosing into every character he bequeaths his moviegoing audience. An acting marvel, who should have been accruing awards since being “terribly vexed” by Russell Crowe, this role, whilst not his best, is at least on par with the Academy’s provincial (and hypocritical) leanings towards “serious” thespianism.

In singing all Cash’s songs himself on the soundtrack, though he lacks the trademark weather-worn baritone, Phoenix nonetheless causes us to double-take on a few magic moments, superimposing the soul of Cash over his onstage persona. His vocal sync is near perfect (nailing that Cash sideways-mouthing), and with most of the songs adhering to simple I-IV-V progressions, the git-tar wrangling should not have caused many brain tumors with the actors-playing-musicians (though Phoenix likes holding that C chord a lot…).

Folsom Prison Blues is played upon considerably, especially that infamous line, “I shot a man in Reno / Just to watch him die.” Powerful words indeed, for a 23-year-old kid from Arkansas in 1955, cultivating the outlaw image which would render the eventual Man In Black…

I once kicked a man in the Chattahoochee, but I don’t think that counts.

Jutting-jawed Reese Witherspoon, suitably perky and delicious enough to moon over (brunette really suits you, darlin’!), is June Carter, Cash’s regular touring buddy and raison d’être, who pulls him from the depths of drug addiction and marries him after a final onstage plea from Cash – in a climax that debases everything Cash created. In making this love affair the movie’s engine, it implies Cash would have been relegated to “Would you like fries with that?” without June, but he was already a success on his own terms before she was his “inspiration.” After all the “biographical” misdirection, this is nothing more than a chick movie clothed in black and blues. Thankfully, the film neglects to show us that June turned Cash to Christianity – being born once is enough to make some people annoying, but being born twice makes them unquestionably intolerable.

Robert Patrick is Cash’s unsympathetic father, Ray, who relentlessly badgers Cash even into adulthood – for the first time in cinema history, a lifelike rendition of parenthood! In their eyes, you never do Grow Up. When Johnny is released after a night in prison for smuggling amphetamines from Mexico, his father comments, “Now you won’t have to pretend like you’ve been to jail,” and when Cash purchases a big house by the lake and seeks his father’s approbation, Ray only offers, “Not as big as Jack Benny’s place.” Ray’s hurtful digs play a large part in Cash’s drive and despondency in this movie, yet a passive (and unrealistic) reconciliation at movie’s end demeans this subtext, with Ray begrudgingly giving Cash his due, “You’re the one with all the stories.” Almost a backhanded compliment, the only reason this silly smoothing of hostilities was placed at movie’s end was to wrap it neatly – like a movie – once again departing from any semblance of “biographical” intent.

Cash’s use of amphetamines propped him up during grueling tour schedules, yet we never hear exactly how scheduled he is. At times, Cash’s real life itinerary grew to 200 cities in as many days – quite an astonishing tidbit – yet the movie is content to have him away from home just long enough to rouse the ire of his Bitching Movie Wife.

There’s an easier way to watch a man die than shooting him in Reno – marry him off to a small town girl. If there is one inherent message – one thread in all these musician biographies – it is that the first girl you marry is going to be the Whining Byatch of the bunch.

The death of Jack Cash, Johnny’s older brother, was so telegraphed, you could see his table-saw mishap coming while watching the movie RAY (2004).

Speaking of Taylor Hackford’s and Jamie Foxx’s RAY, comparisons are inevitable – cos WALK THE LINE is the same story rewritten with a white guy. Already the trend solidifies in delivering pop star biopics: as long as there are enough drugs and dames and deaths in the family, it will assure an economically viable film – all things being equal, RAY is a more fully-developed character study, thin as it is. WALK THE LINE is anorexic.

Fans will love the full versions of Cash songs (performed by Phoenix), but are gonna Cry, Cry, Cry at how the film’s creators did not Walk The Line with the finer details and, like the Boy Named Sue, may want to search the honky-tonks and bars for the men responsible and give them 25 Minutes To Go…