Earth. 700 years in the desolate future. A small robot that looks like E.T. crossed with the Mars Rover Sojourner blissfully rolls along on little tank treads, compacting trash into cubes that he builds into towering trash skyscrapers. He is a Waste Allocation Load Lifter, Earth class – WALL-E.

Humankind has abandoned the ravaged Earth, leaving only their refuse behind, which stretches into orbit like filthy facsimiles of Saturn’s rings; a dystopian, disturbing, Terry Gilliam-like vision, tempered by a smarmy CEO (Fred Willard, the first live human integrated into Pixar animation) entreating us with space as the final frontier, in holograms re-playing to dead cityscapes.

WALL-E is the last of his kind – broken-down WALL-E’s litter the blighted garbage-land. Unmindful of the dead planet, he plies his trade in simple joy. On his time off, he fills a cooler with artifacts, retiring to a derelict trailer each night (with a free-roaming pet cockroach) where he files everything, while watching HELLO DOLLY on VHS and yearning for tactile contact.

Pixar Studios have slammed another one right outa the park! Written and directed by Andrew Stanton (FINDING NEMO, 2003), WALL-E is one of the few original movies this season (not a sequel or remake or derived from a TV show). How does Pixar craft these ingenious, inventive nuggets (where each viewing reveals new discoveries)? Their movies and characters are imbued with so much energy and verve, authenticity hits our nerves in all the right g-spots. A combination of effective storyline, unbridled 3D animation and cuteness so contagious it’ll burn your breakfast.

One day a thunderous spaceship lands, and leaves behind a sleek, pill-shaped “female” robot named EVE (Extraterrestrial Vegetation Evaluator), with a lethal power-blast right hook. Her mission: to find Life on Earth. (Waiter, there’s a little iron in my irony.) 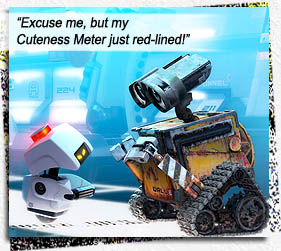 WALL-E immediately falls in love. Or at least rusty lust.

So begins a wondrous, accidental journey for WALL-E and EVE, back to the AXIOM, the spaceship housing all Humankind. By bringing back a lone plant, EVE signals Humankind may safely walk the Earth again. But there is a slight problem: over seven centuries, Humankind have become hover-chair blobs, insensate slaves to Big Brother holo-screens in front of their triple-chinned faces – Humankind can’t think anymore, let alone walk, their bones and muscles atrophied.

Again, the horror of this totalitarian society might have slapped us in the BRAZIL bone was it not for the Pixar team injecting robot buffoonery at every pixel.

EVE’s plant becomes the symbol for freedom and sparks a power struggle between the ship’s evil computer (voiced by Sigourney Weaver), who wants to destroy the green and continue cruising amongst the black, and the AXIOM Captain (a more cognizant blob than the passengers, voiced by Jeff Garlin), who is aided by WALL-E and EVE in potting the plant to drive the ship Earthward.

And this is why Republicans are outraged! As juvenile and unbelievable as it sounds, the duplicitous, traitorous, treasonous swine of the Republican Klan of George W. Bush’s Amerika vilify WALL-E for its “message.” And what “message” are they protesting?…

The ship’s Manual instructs a return to Earth when organic life is found, yet the ship’s evil computer has been instructed by Fred Willard to “Stay the Course” (Willard’s exact words!) instead of ever returning to Earth if “conditions on the ground change.” Sound familiar? Exactly! Though there is no intent to analogize Iraq and George W. McCain, the plotline accidentally highlights how unutterably asinine the McBush-Cheney administration’s foreign policies are, with their claims of “The Surge Is Working but Stay The Course to guarantee Safety Of Our Troops, unless Conditions On The Ground Change, for When Iraq Stands Up, We Will Stand Down, but not if that sovereign country we’ve invaded (to bring democracy to) democratically TELLS us to leave, because we can’t guarantee Safety Of Our Troops (even though LEAVING will definitely guarantee Safety Of Our Troops), because Leaving = Surrender and we Never Surrender, against Those Who Attacked Us (even though Iraq never attacked us)…” Sound confusing? Then the Terrorists Win (the terrorists being the thugs of the Ku McBush-Cheney Klan, of course)…

Only the insane are offended by the insanity of the ship’s computer, who Stays The Course supposedly for the good of Humankind, while keeping Humankind blind to the actual good it can bring upon itself.

The Earth, after a Republican presidency.

Trust the Repubs to focus on this paradox of their own laughable design, while the movie gets away with so many other anomalies:

Of course, I only mention these anomalies because I am a stickler for educative fiction. If WALL-E caused even one Republican’s refried brain to reconsider their satanic party’s non-ethics, I say: