Up against The Wall.

Veteran stockbroker Gordon Gekko wakes upstart stockbroker Bud Fox in the middle of the night with a phone call, to remind him the Hong Kong markets are open: “Money never sleeps, pal!” 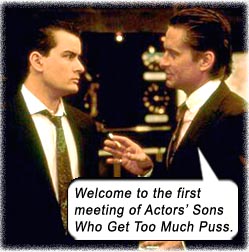 WALL STREET is a powerful albeit slightly cheesy look at the inside of insider trading. Co-writer/ director Oliver Stone, with his characteristic insider knowledge on his filmic subject, conveys another wider world out there that we are not always privy to; amongst the cloying office environments, frenetic relationships and insecure personalities, the people of Wall Street do that mysterious thing they do with imaginary money that isn’t theirs – illegally, unethically and with a plastic 80’s soundtrack.

Bud (Charlie Sheen) is a hungry young stockbroker in a bull pen who dreams of breaking out into something more substantial. Like TWO AND A HALF MEN. Rampant charging corporate bull Gordon Gekko (Michael Douglas) is on the pedestal Bud would like to inhabit. Through persistence, Bud gets a five-minute meeting with Gekko, to try and land a position as broker for him. Gekko is unimpressed – until Bud lets slip some “insider information” about an airline company that piques Gekko’s buy-and-chop-up instincts.

Bud’s dad, Carl (coincidentally, Martin Sheen) is a union boss at that airline, which is how Bud “just knew” it was ripe for the picking. The elder Sheen brings a stately ease to his role, paternally looking down his nose at Sheen The Younger, both in real life and in character, calling him a “salesman” when Bud insists he is an “account executive, soon to move onto investment banking.” When young Bud asks Carl for a loan, Carl inquires of Bud’s $50K Manhattan job, “Where does it all go?” Bud breaks down his payments on car, apartment, suits, etc. to make him look like the richie he aspires to be, ironically adding, “There is no nobility in poverty any more, dad.”

WALL STREET truly is a snapshot of WASP life in the 80s; young fantasizers throwing themselves into the river and hoping they don’t sink. It’s ultimately what we’ve all become used to doing with our lines of credit and the powerful agitprop of capitalistic culture. Wall Street: convincing Americans that in order to grow your money you have to risk it. And dumb cluck Americans buying into the Orwellian dream.

Gekko is under no illusion how he retains his 1% status. He tells the naive Bud that insider trading (the corrupt kind) is the difference between riding in a private jet and owning a private jet. He’s brash (“I’ll talk atcha!”), he spouts the most amusing axioms (“A fool and his money are lucky enough to get together in the first place”); he rationalizes his unethical practices (“Money itself isn’t lost or made. It’s simply transferred from one perception to another”); he coaches Bud in Sun Tzu’s The Art Of War. In essence, Gekko tempts Bud like a modern Mephistopheles, gradually claiming more and more of Bud’s soul, as Bud acquiesces to performing more dangerous and fevered favors for Gekko in the pursuit of treasure. I’m sure TWO AND A HALF MEN was not part of the equation…

No matter how big of a dog you think you are – there’s always a bigger dog. The dog bigger than Gekko is Terence Stamp as Sir Larry Wildman. He’s richer, scarier and Britisher. Gekko puts Bud on Wildman’s tail for inside info, exploiting Bud’s hunger and rewarding him with riches.

WALL STREET is the same parable espoused in TRADING PLACES (1983): engage in insider trading, lose your shirt. That is, being drunk on power makes you as likely to screw up and go to jail as being drunk on alcohol. Bud’s downfall looms as he moves into a swank penthouse apartment (decorating it in 80’s Gaudy), scores a sophisticated blonde, Darien (Daryl Hannah), and develops a penchant for preparing sushi for dinner. His hubris would lead him to try brokering a deal to chop up the small airline company where his father is a union boss.

By the late 80s, it was established that the richest 1% in America “owns half the country.” Gordon Gekko would make a speech that would become infamous for the catch-phrase “Greed is good,” making it seem as 80s-dated as Adam Ant, but the speech is relevant in 2011 for various reasons. The opening phrase, “You do it right – or you get eliminated” is still the model for everyone in business – except for the corporate dishonest who do it wrong and still get rewarded (the “Too Big to Fail” asshats).

It is ominous that even back then, director Stone and corporate raiders were acknowledging that the USA was run by corporations; what they couldn’t predict was that greed would not save the corporate model but set it up for takeover by other countries with a better grasp on capitalism.

…The new law of evolution in corporate America seems to be Survival of the Unfittest. Well, in my book you either do it right – or you get eliminated… I am not a destroyer of companies. I am a liberator of them. The point is, ladies and gentlemen, that greed, for lack of a better word, is good. Greed is right. Greed works. Greed clarifies and cuts through and captures the essence of the evolutionary spirit. Greed in all of its forms, greed for life, for money, for love, knowledge, has marked the upward search of mankind, and greed – you mark my words – will not only save Teldar paper but that other malfunctioning corporation called the USA.
— Gordon Gekko, WALL STREET.

Will that “malfunctioning corporation” ever learn its lesson when there’s a steal-from-the-poor-and-give-to-the-rich bailout around every corner?

In the end, both Gekko and Bud have met their downfall, Gekko ending up in jail and Bud ending up in TWO AND A HALF MEN.