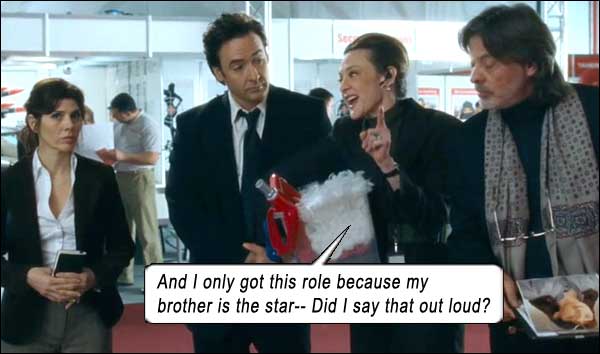 War is the improvement of investment climates by other means.
— Ben Kingsley, WAR, INC.

The opening text hits too close to the bone:

“In the 21st Century, great corporations will bestride the Earth [like KBR?], replacing nations as the true creators of history [like The Illuminati?], amassing powerful private armies to do their bidding [like Blackwater? – re-branded XE in 2009 in an attempt to bury their corpse baggage]. But in delicate situations, they need matters adjudicated on a single day… by a solitary man.” 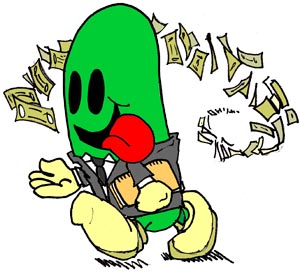 Though WAR, INC. is billed as a “continuance” of Cusack’s hitman character, Martin Blank, from the excellent GROSSE POINTE BLANK (1997), it is not. Hauser is more of a “facilitator” – he will get any job done; whacking people is only part of the package.

Hauser’s mission to (fictional) Turaqistan is to assassinate a politician building an oil pipeline through the country that conflicts with the fiscal interests of the American occupying corporation, Tamerlane.

In America’s “first war ever to be outsourced to private enterprise,” the VP (Dan Aykroyd) has been issued a “pre-emptive pardon” from the President, for all the criminality he will no doubt employ to continue America’s illegal occupation of Turaqistan. And the bone is shaved closer.

Speakers blare propaganda about the greatness of American “liberators,” as tanks roll through the streets with advertisements on their sides; every piece of hardware, from soldiers’ helmets to their weapons, emblazoned with the Tamerlane logo; ever-changing electronic billboards glare American icons – The Fonz, John Wayne, Captain Kirk, Hulk Hogan; ads for “Democracy” brand cigarettes… The VP tells Hauser, “Wonderful opportunities here, as long as these towelheads don’t actually look up freedom in the dictionary.”

The corporate method of disseminating information is not to allow embedded journalists into the war zones, but to herd them into a 3D virtual war zone theater and tell them what to report – the “interactive journalistic experience.” Of course, it’s hyperbole, but can you feel the meshings with reality outrage your mushroom bone?

Directed with urgency and verve by Joshua Seftel, WAR, INC. is shocking not because it is outlandishly prescient, but because it describes TODAY – It would be George Orwell’s 1984 if it wasn’t already George Bush’s 2004. 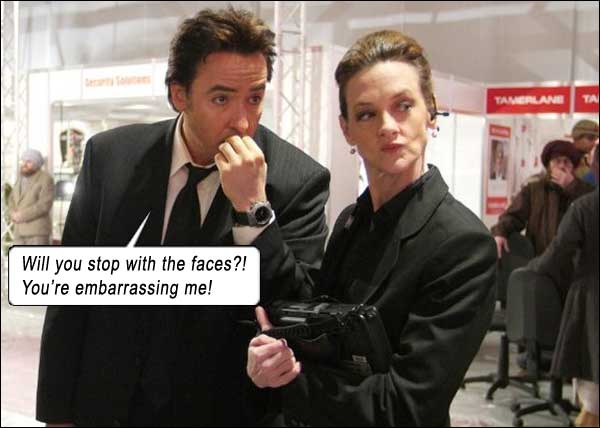 Incessantly-mugging Joan Cusack is Tamerlane PR in Turaqistan and undercover as Hauser’s secretary (a wink to GROSSE POINTE); a conduit for corporate propaganda: “Water has been restored to Turaqistan so I’m sure you’d like to give a shout out to the third bomber wing for those humane precision strikes that have created this wonderful opportunity.” Donald Rumsfeld could not have been more doublespeakier. She later crows of Tamerlane’s humane-ness in constructing its prosthetic limbs from the same parts that make the weapons that caused the amputations. She says it without irony.

Marisa Tomei is Natalie, an indie reporter who smells there is corporate agenda afoot and uses her smokin’ cuteness on Hauser to take her through real war zones – needless to say, the reality is like a mushroom cloud slap in the face.

Ben Kingsley is The Viceroy, heartless master of machinations, a kind of Dick Cheney behind the Dick Cheney.

We’re mushrooms: kept in the dark and fed bullshit.
— Anonymous.

WAR, INC. is not an anti-war film – it’s way too big for that. It is a wake-up call on the unchecked Black Plague growth of faceless, amorphous, unaccountable corporations and how they perversely conflict individual Freedom.

We see that War is simply one of the many tools that corporations now use for leverage against governments. As governments are the tool that corporations use for PR and sustenance. Never more apparent than in the 2008-2009 recession, when corporations were being spoon-fed by the hands they were biting; Matt Taibbi of Rolling Stone asserting correctly, “if they’re too big to fail, they’re too big to exist.” Yet exist they do. Set up with such failsafe inculcation that the very sheep they rape keep them afloat with the wool off their backs.

John Cusack (co-writer of WAR and GROSSE) knew this way back in GROSSE POINTE when he said, “Governments, nations – it’s all public relations theory at this point.”

And the King Harlot of PR in the real world – Burson-Marstellar – with no conscience, no ethics, no shame, continues “re-branding” entities that lose favor with the public (rather than changing the practices which caused them to lose favor): from working with the Arabian government after 9/11, to re-branding AIG into AIU, to re-branding the War on Terror that Obama inherited into the “overseas contingency operation,” Burson-Marstellar can remove the toxic taste from anything. Even the End of the World as We Know It.

In another prescient stroke, the writers of WAR, INC. (Mark Leyner, Jeremy Pikser and Cusack) gave their product the most ironic, obvious name in this climate of “re-branding” – Brand USA.

WAR, INC.’s message is too expansive and ubiquitous to drag it down to the predicament of one man – Hauser – which is what it does and why it slips.

Despite a major gutshock fight scene where Hauser gets to show off his killing finesse, his predicament is mostly played humorously, as a sociopath caught up in a war zone, worried about his hit going awry, rather than the circumstances or reasons of the war.

It should have remained a biting black satire on the corporatization of killing, instead, Hauser becomes a merc with a conscience. And a moral epiphany is inserted sideways into Cusack’s steel-flavored hitman: “I like killing people as much as the next guy – but I signed up to kill the bad ones.” Uh, that’s not a hitman’s job description! In GROSSE POINTE, Cusack’s constant disclaimer during a kill was, “It’s not me” (as in Nothing Personal). That’s the job description. WAR, INC. makes his hitman human – blecch! – “anyone who momentarily interrupts the accumulation of our wealth, we pulverize – I’m not feeling good about that anymore.”

Guess Cusack took one too many Screenwriting Character Arc classes…

When the American government in the movie starts a pre-emptive war on Ujikistan (initiated by friendly fire into their own facility and claiming a terrorist attack – the bone is shaved through to the marrow now!), VP Aykroyd uses the exact words of the Bush Klan to qualify his crime: “We cannot let the smoking gun come in the form of a mushroom cloud.”

Armageddon won’t come in the form of a mushroom cloud. Armageddon is already here, but it has been re-branded by the corporations.

It is now called Bailout.