Spielberg and Cruise: Reign of the Smugs.

One good thing can be said about the alien attack in WAR OF THE WORLDS – at least it achieved the mission impossible of wiping that insufferable smirk off Tom Cruise’s face. 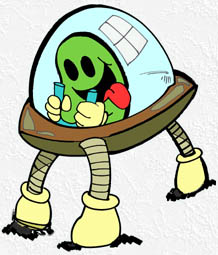 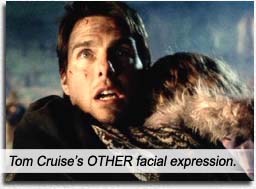 Steven Spielberg wields this remake of H.G. Wells‘ 1898 classic tale like Mel Gibson wielded his recounting of the peacenik crucified guy’s passion back in 2004: everyone in the world knows the story, so Spielberg – like Gibson – neglects to put any “story” into the movie. He doesn’t even need junkets to tell the tale prior to the movie (as George Lucas wielded his STAR WARS catastrophes) – he’s got a century’s legacy of societal inculcation holding up his plotholes with Atlas shoulders and tripod-girded loins.

From H.G. Wells’ original 1898 book (with its rank scientific inaccuracies), to Orson Welles’ 1938 radio broadcast (which caused nationwide panic), to George Byron’s 1953 film (as melodramatic and goofy as any 1950s B-sci-fi thriller), to Jeff Wayne’s 1978 concept album (whose opening chords were so powerfully reminiscent of Beethoven’s Fifth that I used them on an intro tape for a live rock band), WAR OF THE WORLDS is embedded in what might be called our memetic consciousness (a chunk of societal inculcation, passed down generations). So Spielberg smugly rolls film and lets people Run and Scream until he runs out of budget. The End.

Though Wells’ story of Martians arriving in tripods and using death rays worked gangbusters during a more unsophisticated time (when delusional astronomer Percival Lowell (1855-1916) was feverishly sketching canali on Mars and speculating on its intelligent life), our current technology definitively shows there is no “life as we know it” on the red planet, let alone a dying super civilization which might usurp Earth for their next home.

To circumvent the fact that Mars is such an open book today, Spielberg and writers Josh Friedman and David Koepp opt to BURY this movie’s alien invaders under the Earth, presumably for millennia, and presumably so deep that our modern equipment nor our extensive sinking of foundations would detect them. Also, there is never specific mention of “Martians,” that term being out of fad since humans have explored so much deeper into space and envisioned so much more exotic extra-terrestrials in INDEPENDENCE DAY and MEN IN BLACK. (Maybe they’re from the even scarier planet of L-Ron-Hubbard?)

Tom Cruise is Ray Ferrier (which is irrelevant, as you’ll see), a divorcee who cannot connect with his teenage son (Justin Chatwin) and whose daughter (Dakota Fanning) is precocious enough to be either a Hollywood Brat or possessed by the devil. (Where did this convention originate of ten-year-olds smarter than their 40-year-old parents?) After smugly smirking his way through twenty-five minutes of filmstock, Ray witnesses a giant metal monster rise from under Chicago’s concrete and start vaporizing people and buildings with its “death ray” (sounds kooky, but there it is), effectively wiping aforementioned smirk off aforementioned huge-salaried, delusional movie star’s self-satisfied mug.

Then it gets interesting. There is some shouting… then Running and Screaming. Through it all, Our Heroes never seem to Get A Clue, taking the obligatory unnecessary risks at every turn (running 200 feet to bushes to take a pee; teen son constantly rebelling against Ray, for the sake of being the rebellious teen son; driving slowly through a pack of crazy people, just asking for their car to be stolen). A plane crashes, Tim Robbins cameos as someone crazier than Tom Cruise, the American military once again get bitch-slapped by foreigners (hey – I wasn’t even thinking about mentioning Dubya); there is the perfunctory “tension-filled” scene where an alien recon arm sniffs around a basement that Ray is hiding in (same old Spielberg – it could have been an axe-murderer or a Velociraptor – the conventions are there, let’s use ’em) and there are lots of big orange explosions; Ray’s son gets killed, then is alive at the end, and Tom Cruise does a lot of driving with his daughter born of Satan.

There is an opening narrative, not a patch on Richard Burton’s Shakespearean locution on Wayne’s concept album: “No one would have believed, in the last years of the nineteenth century, that human affairs were being watched from the timeless worlds of space… and yet, across the gulf of space, minds immeasurably superior to ours regarded this Earth with envious eyes, and slowly and surely, they drew their plans against us.”

Over 20 years ago, Spielberg gave us a message of hope – a Sagan-esque paean that there was intelligent life somewhere else in the galaxy, yearning communication with our idiot species (in fact, these WOTW “tripods” sound suspiciously like the CLOSE ENCOUNTERS aliens with their musical air blasts) – and now he delivers this overblown ode to the guttural nature of that idiot species, showing us formicating, selfish humanity in all its gory.

Is it a sign of the times that one of the greatest filmmakers of our era is so adversely affected by the real-world politics of mass destruction?

Using the same kind of filtering technique he used in 2002’s MINORITY REPORT (that overbright, noisy – as in “grainy” – filmstock), Spielberg knows that even if people don’t know WOTW, his money-is-no-object effects can stand on their own in lieu of story cogency.

When Ray is captured by the tripods, he is carted about in a cage under the machine’s belly. No one looks twice when an extra is sucked into the underbelly of the tripod to fuel the machine with human flesh. But when it grabs Ray, suddenly EVERYONE in the cage piles onto Ray to pull him from the maw. Why? Because he’s TOM CRUISE, dummies!

The opening shots of the film portends the aliens’ downfall, as we see a shot of space, which transforms into microscopic bacteria, which transforms into the Earth as a drop of water on a leaf; after the aliens die of Earth viruses, the closing shot bookends the film by reverting back to the bacteria, which morph into the starry blackness of space. If only this creativity was employed in the rest of the movie…