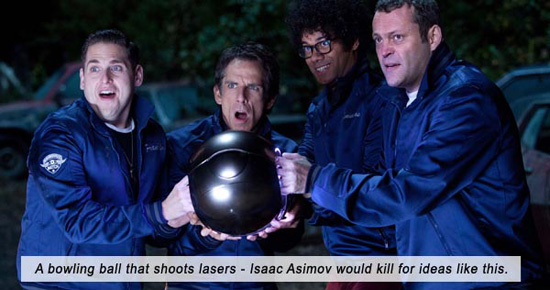 THE WATCH  is supposedly a comedy. But it’s funny how no one’s laughing.

Written by Seth Rogen and Evan Goldberg (the dynamic duo that brought us SUPERBAD and PINEAPPLE EXPRESS), this tale of four suburbanites who start a Neighborhood Watch group to catch a murderer, and discover they must defend the world against an extra-terrestrial invasion, seems to be suffering from the cast not grasping how to deliver the usually biting Rogen-Goldberg humor.

But then, is there any humor at all in this dud script? The concept sounds workable: a disparate group of watchmen who consider themselves heavy duty heroes even though they’re simply curbing boys’ pranks and are ill-prepared to curb much else, suddenly find themselves having to curb much else. But when the script skews to alien invasion (complete with CGI aliens that resemble M. Night Shyamalan’s in SIGNS), it seems the cast and crew themselves were not equipped to take on this bigger task. There is a half-hearted attempt at a redemption arc for the Watch organizer, but by that point we’ve suffered through so many clunkers, we truly couldn’t care less whether he’s redeemed or anal-probed…

The four suburbanites are: Ben Stiller, playing his usual vest-wearing nebbish, anal organizer of the Watch; Vince Vaughn, in another stellar motormouth performance, joining The Watch for the camaraderie and beer; Jonah Hill, resident Rogen-Goldberg “team member” yet the least credible comedian on the block (is it because he lost all that weight? In FUNNY PEOPLE, Jonah Hill said something to Seth Rogen about not losing the weight if he wanted to remain funny. Hmmm…); and British Richard Ayoade, in his first major motion picture role, providing most of the humor, fantasizing saving women for the inevitable ball-licking that would ensue.

But they never do discover anything actually funny.