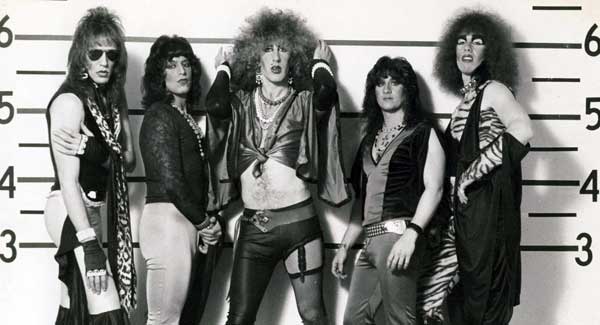 “Yes Officer, the one in the middle! She’s the one who haunts my dreams.”

Sure they suck, but they’re gonna sell a lot of records!
— Phil Carson, Atlantic Records, Europe.

From the outset, I am a card-carrying Sick Motherfucking Friend of Twister Sister. So the rock doc WE ARE TWISTED FUCKING SISTER! holds some resonance for me, and fills in many Scenes Missing in this hard rock band’s long haul to recognition and non-tranny respect. However, whereas most docs are inclusive to fans and non-fans alike, this doc seems intent on winnowing out non-fans, by focusing not on Twisted Sister’s post-1984 worldwide success with their Stay Hungry album, but exclusively on all the sweat-choked toilet-pub gigs that led to their fifteen minutes. 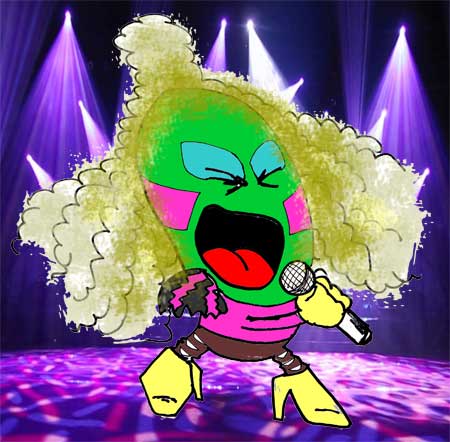 Twisted Sister was never an overwhelming band. They lacked the songwriting prowess of the lodestars of their genre – Iron Maiden and Judas Priest – and their twin-guitar attack never came close to unseating the cataclysmic fury of those bands’ axemen. Their forte was their brute force. What they lacked in chops and creativity, they made up for with simple hard work, and ended up carving a little twisted space for themselves in rock history. If ever there was a band that “paid their dues” this feature – which wends its way through every dank drunken shithole in New York – clearly proves that band is Twisted Sister.

Founding member and first Sister, guitarist Jay Jay French commands the bulk of talking-head time, as he recounts war stories from the earliest days of Sister in the early ’70s, with completely different members from those that would conquer the world in 1984 for a brief period of big-hair history.

Dee Snider, lead vocalist, who joined the band after it was already on a non-stop run of club dates in 1976, is also a prominent talking head (in his “respectable” mode: hair tied back, dress jacket and black shades). Successive Sisters get screentime congruent with their assumption into the fold: Kenny Neil (bass 1973-1978), Eddie Ojeda (guitar), Mark “The Animal” Mendoza (bass), and A.J. Pero (drums, who would unfortunately die of a heart attack in March 2015).

WE ARE TWISTED FUCKING SISTER! seems a document on the biggest pub band in the world, as it stops short of detailing what transpired after the chart and tour successes, which are reduced to a few title cards before the end credits. It makes me ponder writer-director Andrew Horn’s rationale behind this exercise…

Fans love these kinds of backstage passes, seeing their righteous street band in all its raw unsigned glory, but fans only familiar with the band as chart-topping darlings in glossy MTV videos, would be repulsed by this kind of naked fury. The doc represents a return to those days when the band meant something to YOU alone, before commercial success, before pandering to record execs, before your little sister glommed onto them like a lipstick fad. 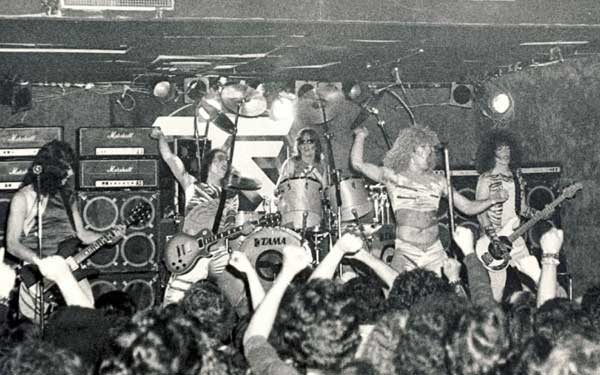 Everything was better when rock and roll was black and white…

Twisted Sister became quite successful as a professional band without a record deal, back in the days when it was possible to play five to seven nights a week AND GET PAID, in a circuit French describes as the “velvet noose” – easy to get complacent being big fish in a small pond.

Though they could secure no airplay or record deal – Doug Morris, Atlantic Records president, threatened to fire people if they mentioned Twisted Sister – they resourcefully found other ways to promote their original music, like buying radio ad time. Instead of a cutesy commercial running for a minute, one of their songs would play, tagged at the beginning and end with the name of the band; in effect, people were hearing Twisted Sister songs on the radio!

They became quite famous for their vendetta against disco, and it was common for venues that were closing down to hire Sister to destroy the place; their catchcry of “DISCO SUCKS” would literally cause fans to bring the roof down. (They famously destroyed the “2001 Niteclub” where Tony Manero caught cooties in SATURDAY NIGHT FEVER.) 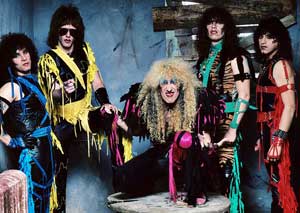 Twisted Sister in their most recognizable mainstream colors from the Stay Hungry period.

If you’re here for We’re Not Gonna Take It, or fun facts about the making of the Stay Hungry videos, you’ve come to the wrong doc. There is not even a clear discography outlined – Under The Blade (1982, raw blood and guts), You Can’t Stop Rock And Roll (1983, righteous power rock), Stay Hungry (1984, heavy yet glossified hair metal). I only know this because I owned these albums. (And I saw the band in Sydney Australia, at the height of their fame in 1985, when their bright colors had become standardized to their characters, where Mark “The Animal” Mendoza scared us by beating his mic stand to death and using his massive upper body strength to twist it into a pretzel.) After Hungry, even I didn’t buy Come Out And Play (1985), even with the inclusion of legend Alice Cooper guesting on the single Be Chrool To Your Scuel.

Since it’s a doc about their PRE-famous days, all the footage is home-video quality, with horrible audio. The few broadcast pieces are low quality. It is quite obviously only for die-hards. Besides a few shots of Sister on British TV and onstage at a European festival where Lemmy himself endorsed them personally and saved their hides from being first-degree murdered by purebred heavy rock fans, there are no tales of world tours, no PMRC hearings (when Snider famously stood alongside Frank Zappa and John Denver to uphold free speech), and most tellingly, there is nothing about the gradual dissolution of Sister after their fame had run its course. 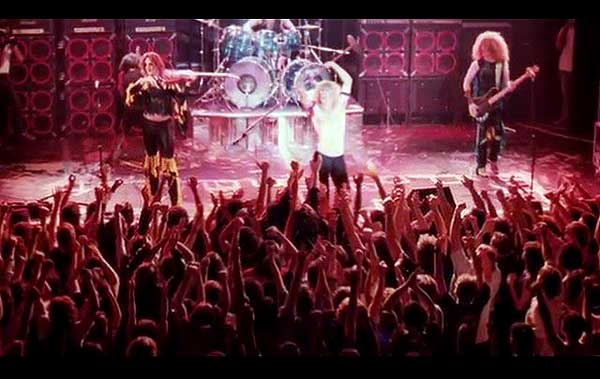 Live: unstoppable. On the Charts: stoppable.

Maybe we don’t see the overwhelming success on film because Snider, French and co. may be embarrassed by what they had to do to achieve it, after such a long run being righteous about their uncompromising rock. In Snider’s words, during the making of Stay Hungry, they bent to the pressures of a canny record exec who homogenized them.

Don’t begrudge him, rock fans. It’s what we’d ALL do.

Me? I’d be embarrassed that my biggest single sounded like O Come, All Ye Faithful…

Twisted Sister (live) ♦ What You Don’t Know (Sure Can Hurt You), and Destroyer

Original bassist Kenny Neil (who quit in 1987) gives lucid interviews while he’s talking about the early days of the band and his involvement, yet it’s telling that as soon as he starts talking about “getting sober” and “turning christian” his eyes start to twitch. And it just gets worse. What is this guy either hiding, or still running from, or being dishonest about? Whatever the case may be, he was absolutely fine talking about the band UNTIL his bullshit “recovery” and born-again-ness emerged as the topic, then it was Twitchy McPete all over the place! Don’t take my word for it – his twitching eyes are a “tell.” Watch it happen, and make your own decisions on the bullshit that HE KNOWS IS BULLSHIT.

Ironically, he says he was being “dishonest” with himself for staying in the band while he was turning christian, and yet, his twitching eyes tell the opposite story – that he actually felt better in the band and that he was fooling himself into thinking christianity was the right path! He now regrets it. We can tell by the way he talks. And his godless twitching.

And here’s the clincher. He brought his new, weak-minded friends-in-Christ to a show, and they advised him to leave the band because “the devil was speaking through Twisted Sister.” And Jay Jay French glowers, “Waitaminute, Kenny! Me and Dee don’t drink or smoke! You’re the alcoholic! And the devil is speaking through US?!” There’s just no talking to weak twisted minds, is there?