A married businessman spends his money on a prostitute. (And right now you’re thinking: ‘So what’s new?’)

WELCOME TO THE RILEYS follows married Indianapolis businessman Douglas Riley (James Gandolfini) to New Orleans for a conference. While out on the town that night, he befriends 20-year-old stripper, Allison (Kristen Stewart) – no, not in that way. He starts taking care of her… no, not in that way. And then pays for her apartment and moves in with her… no, not in… well, I can see how this is looking. 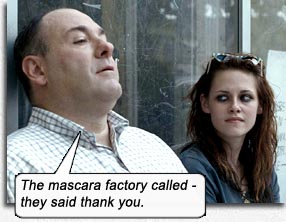 Douglas is a lost soul, bereft after the accidental death of his daughter, incommunicado with his wife Lois (Melissa Leo), and having an affair with a waitress (Eisa Davis), whom he has grown so close to that he asks her to accompany him to Orleans. She dies a few days later. You could call this a run of bad luck for Douglas. So you will forgive his state of mind in seeing in the young stripper, a surrogate daughter, desperately needing to right something in his world of so much wrong. It helps that this stripper has the steamy, come-hither look of Kristen Stewart. (I’d make that old gag about Stewart wearing enough mascara to embarrass a prostitute, except she IS a prostitute here. Which doesn’t bode well for her wearing exactly the same amount when playing a besotted teen, or just out on the red carpet showing off her boy’s botty.)

So depending on which woman’s group you’re speaking to, Douglas is either a rank philanderer, or a man in pain desperate for salvation. Even venturing into that strip club was not for mere titillation, but to fulfill the deeper human hunger of emotional connection with others of our species. At least, that’s the excuse that *I* always use.

Lois seeks the same. Hearing that Douglas wants to stay longer in New Orleans, though she hasn’t driven or been outside in years (inept at even adjusting the buttons for the car seat) she haltingly drives across country to be with him. She’s not going because she’s scared of him fooling around; she wants to regain Douglas’s love; to make that human connection herself, and push past the misery over her daughter’s death.

When Lois joins Douglas and Allison in Orleans, she too falls under the spell of regaining a daughter, and when they are in a department store trying on clothes and a saleswoman calls to her, “Excuse me, ma’am, your daughter wants you,” that was a sealant like Epoxigrip.

Unfortunately, helping girls like Allison is not just an uphill battle, but most of the time, a losing one. WELCOME TO THE RILEYS loses me with its optimism. I’ve known many girls like Allison, and no matter how much love and support you lavish on them, they are incorrigible; they have grown so used to a way of life, that they cannot perceive any other mode of existence. Long-term plans are moot. No matter how much you give, they will take and take and take, knowing that they only have so long to exploit this benefactor before the benefactor discovers the ugly truth about them. Unreliable, ungrateful, unremorseful. Thankless.

In this movie, Douglas even bails Allison out of jail, for which she is completely All Of The Above. Though she goes her own way, the ending is one of hope; that Allison will be alright because she has these good souls as eternal benefactors. I call bullshit. She won’t be alright. Trust me, I’m a Cucumber.

James Gandolfini and Melissa Leo are brilliant – such controlled and mature actors (Gandolfini once again stunning us – like he did on THE SOPRANOS – with the realism of his magnificent “waking up” scenes; always the mark of an exceptional actor). If only Kristen Stewart could have contributed more than her Shatner Pause-Acting and forced statements. We don’t even see any of her assets. I mean, she’s a stripper – and we get not one peek a boo, not one snatch of snatch; nothing! (I have much more respect for Marisa Tomei or Kate Winslet, who get their knox out at the drop of a hat.) And we know that’s a contractual bully-clause because Stewart’s in the middle of the TWILIGHT series and those producers don’t want teen boys to stop wanking over her. God forbid they see what a stick figure she really is. (“Oh, an ironing board chest and a boy’s botty. Well, that’s that – let’s Google Shyla Stylez and wank over a real woman”… ) The lack of Stewart nakedness moves the sense of realism down one notch.

Another notch down would be the stripper’s cell phone. That is, Allison can’t be much of a fuckup – and I doubt her character is even a real stripper – if she can hold on to her cell phone for so long without losing it, or without having the battery go dead and not having a charger, or having her account go dead for not paying it, or breaking it, or a “boyfriend” breaking it, giving out her number to stalkers and then having to change it, leaving it in a store, a crack house or in a john’s car, having to change providers because she’s in so much debt to her previous provider she’s been cut off… In which fantasy world do you find strippers this reliable?

Welcome to The Movies.