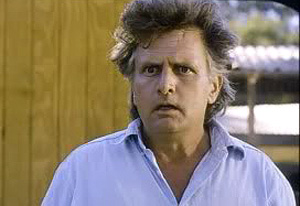 The actor you call when even Charlie Sheen
won’t return your calls.

We meet these brawling “scientists” (don’t all scientists brawl at their excavation sites?) somewhere in Arizona, Europe, as they unearth a human skeleton with a wolf’s skull. Joe Estevez, in a role you will not soon forget – waitaminute, who was I talking about?… oh right, Martin Sheen’s brother – wide-eyed in terror (or attempting to perform the facsimile thereof), pules “yana-glanchi” at the skeleton, which means, loosely translated, “buried studio prop.”

Apparently, the studio prop is a dead werewolf – Waitaminute! – when a werewolf dies, doesn’t it transform fully back to human shape? How did its head remain lupine?

Specious examination follows, with lead scientist Noel (Richard Lynch, bearing an unfortunate resemblance to literary gadfly – and one of my heroes – Harlan Ellison) asserting that the creature ran on all fours – but with all four skeletal limbs so patently human in form and function, were it to run on all fours, the creature’s butt would be so high in the air, it might as well have stood up and gone bipedal.

Noel and musclebound “scientist,” Yuri (Jorge Rivero, whose English locution was assimilated from Antonio Banderas movies), apply their stringent Scientific Method to the mystery of dem bones, which involves contemplating every unintelligible legend surrounding this mythic creature, arriving at the baseless conclusion that the skeleton is, in fact, a “wahr-wilf,” without raising one finger to physically examine it. That would only spoil the Science. 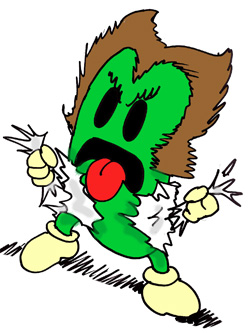 The horrific transformation from cuke to beast!

Blond-breasted Natalie (Adrianna Miles), whom we presume has some kind of higher education (other than carnal) to be one of the lead scientists on this dig, tries ever so hard to add convincing dialogue to her scenes, but in trying to get her Euro tongue around English as her Second Language, she sounds like she’s gargling marbles. She remarks the bones are “absolutely fascinating,” with a look that can only mean, ‘I didn’t take enough acting classes.’

WEREWOLF has sprouted hairy legs for its skewering on the mighty MYSTERY SCIENCE THEATER 3000, which should make Iranian writer-director Tony Zarindast (second cousin to Ziggy Stardust) proud; considering that WEREWOLF is nearly his twentieth directed film and still resembles a community theater production (well, they do call him the Persian Ed Wood), he should be howling at the moon for the publicity Mike and the ‘bots brought him.

The lead prettyboy, Paul (pronounced “Pahlle” in Euro), is beaten by Yuri with the sharp end of the yana-glanchi skull; consequently, he turns into a were-creature and minces about the countryside, crawling, jogging, ululating, pretending to bite people, shape-shifting into at least five discernible stages of wolf-hood, one of which looks like a guy in a bear suit. We gather that there is something terribly wrong about this, not least because the moon has been full for about two straight weeks indicating that its orbit has destabilized, but also because Natalie seems concerned (or attempting to perform the facsimile thereof).

And then, thankfully, the movie ends, leaving about five characters unaccounted for, two or three who just never appeared again after the second act. The final scene sees Natalie discovering Pahlle as a slavering werewolf and being unafraid of him, the big reveal/twist/illogical ending being that Natalie herself is a wahr-wilf!

How this came to pass is pointless to contemplate. Why this seems to be meaningful as the punchline of the film is even more of a mystery. Just back away slowly and hope the movie leaves you unscathed.