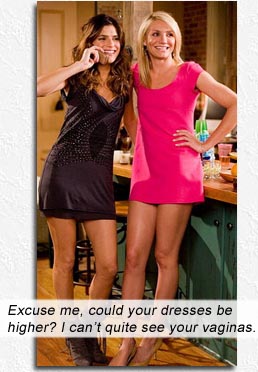 Jack (Kutcher) and Joy (Cameron Diaz) are total strangers, who are thrown together when they are mistakenly double-booked into the same Las Vegas hotel room. They’ve both come to Vegas to drown their sorrows, Jack after being fired by his dad boss (Treat Williams) for being a layabout, and Joy after being dumped by her upper class boyfriend (Jason Sudeikis) for being high maintenance, low self esteem.

Jack is with his low-rent lawyer buddy (Rob Corddry, stealing the film), and Joy is with her snitty gal pal (Lake Bell, dying to be Amanda Peet).

Drunken night ensues, and the next morning Jack and Joy find they got married even though they hate each other. Before they can annul, they win a jackpot (Joy’s coin, Jack’s lever pull) – and through the judge stylings of the comedian formerly known as Dennis Miller (whose sharp mind fell to Republican nutjobbery years ago) they are sentenced to stay married for six months in order to claim the cash.

How tormenting it must be for two superhot white American heterosexuals obviously attracted to one another to pretend marriage to each other.

Each tries to annoy or trick the other out of the marriage to claim the money for themselves, with Zach Galifianakis, Dennis Farina and Queen Latifah all cameoing.

I must make mention that in this film, Kutcher has somehow ceased to intrinsically annoy me. By that I mean, he exudes a seasoned maturity as an actor – without comparing him to Gene Hackman or Philip Seymour Hoffman, at least he elevates himself above the Rob Schneider/Napoleon Dynamite set. I will always respect him for his business acumen, but now I can even tolerate him as an actor without having to take my medication. Upside: it’s a good performance. Downside: it’s in this movie.

Each situation where the two antagonists try to outdo each other or force the other to renege on the deal is performed so ineptly, both in the context of the movie and in the actual screenwriting, it’s not even a case of just considering it an old-school farce or a cartoonish bitchslap. It’s just plain stupid – aimed at just plain stupid.

Then there is the underlying, unsubtle message that as they grow closer, they become better people. Now it’s just vomit aimed at vomit.

Joy makes a big issue of “leaving the toilet seat down” but women have lost me on the import of this world-shaking deal breaker: Up or down – who cares?! You’ve got hands – use them! That’s why toilet seats come with hinges! Women call men who leave the toilet seat up insensitive, but isn’t it more insensitive that men have to kowtow to women’s notions of “correct” toilet seat position?