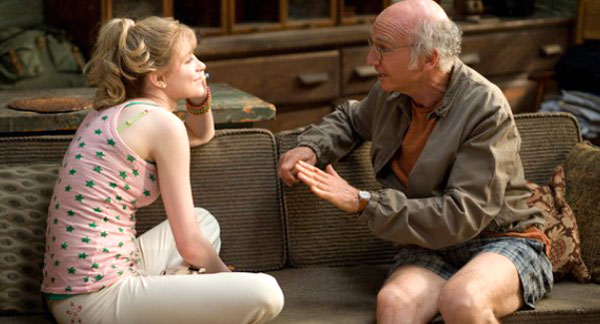 “No, you don’t understand: ‘dark matter’ has nothing to do with going Greek.”

Whatever WHATEVER is, it works.

After dabbling in Euro filmmaking that exposed another wondrous dimension of his filmmaking talents, Woody Allen is back in his native New York with a curmudgeon vengeance in WHATEVER WORKS.

I’ve always thought of Larry David as a crunchier Woody Allen. As the star of WHATEVER WORKS, with Allen writing and directing, I don’t know who reminds me more of whom, as Allen’s cynical vernacular tumbles out of David’s gunmetal mouth. And if you know CURB YOUR ENTHUSIASM, the words seem no less natural than Larry David improvising.

For this perfect casting choice, the hardest aspect in watching this movie is suspending our disbelief and accepting Larry David as a character OTHER than himself.

David is cynical New York physics teacher, Boris Yellnikoff, “a genius surrounded by microbes,” considered for the Nobel Prize (“I didn’t get it, but these things are all politics anyway”), who constantly breaks the fourth wall to ramble at we the audience about the sorry state of humanity. Philosophical red meat.

Boris’s philosophy is simple: “My story is: ‘whatever works’ – as long as you don’t hurt anybody; any way you can filch a little joy in this cruel, dog-eat-dog pointless black chaos.” “People make life so much worse than it has to be… On the whole, I’m sorry to say, we’re a failed species,” with everyone being either a moron, imbecile, retard, cretin, or inchworm.

“…the original teachings of Jesus, Judaism, Karl Marx – all great ideas but one fatal flaw; all based on the fallacious notion that people are fundamentally decent; give them a chance to do right and they’ll take it; they’re not stupid, selfish, greedy, cowardly, shortsighted worms…

“Let me tell you right off, I’m not a likeable guy – charm has never been a priority with me and just so you know, this is not the feel-good movie of the year. So if you’re one of those idiots who needs to feel good, nnn, go get yourself a foot massage. What the hell does it all mean anyhow? Nothing. Zero. Zilch. Nothing comes to anything. And yet, there’s no shortage of idiots to babble.

“Not me. I have a vision. I’m discussing you, your friends, your co-workers, your newspapers, the TV. Everybody’s happy to talk, full of misinformation: morality, science, religion, politics, sports, love, your portfolio, your children, health. Christ! Nine servings of fruit and vegetables a day to live. I don’t wanna live. I hate goddam fruits and vegetables. And your omega-3’s and the treadmill, and the cardiogram and the mammogram, and the pelvic sonogram, and the colonoscopy.

“And with it all, the day still comes when they put you in a box. And it’s onto the next generation of idiots who’ll also tell you all about life, and define to you what’s appropriate…”

The full monologue delivered in an unbroken take, which not only sets up Boris’s seething hilarity, it smash-cuts us into the heart of Boris’s dissatisfying life. He has split with his wife for things being “too perfect” and now lives in a ratty studio apartment, meeting his friends (one of whom is a very subdued Michael McKean) on various nights for coffee, cards, jamming and ranting.

One night, against his better judgment, he takes in a young runaway girl, Melodie, (Rachel Evan Wood), so southern-ignorant she doesn’t recognize his intolerance of her stupidity, and doesn’t grasp his stream of verbiage as insults.

Nonetheless, unbelievably, they will fall in love, marry, and fill a void in each other. (The love between the young maiden and the old man – too obviously autobiographical?)

This happens early in the film, and we are so saturated with Hollywood Romantic Protocol that we take it for granted they will remain a couple, almost breathing a sigh of relief that Boris is happy in his old age. But that is not what this film is about. Boris is not necessarily “happy” – it is almost a case of Stephen Stills’s axiom, “…Love the one you’re with.” The point of coupling Boris was to snatch that illusion of couplehood away from him. He warned us it was not feel-good.

The film takes comic, absurdist turns when Melodie’s redneck christian mother (Patricia Clarkson) and philandering repentant father (Ed Begley Jr.) turn up at Boris’s door on separate occasions, each reacting adversely to Boris as their daughter’s husband. (At this point in his career, anything Ed Begley says – in that sincere, clueless delivery – is gold.)

And if we feel the film derails when Melodie runs off with a younger man (Henry Cavill), we remind ourselves that was the point Boris was trying to make – happiness comes in short bursts, “whatever happiness you can filch or provide, every temporary measure of grace – whatever works.”

But don’t worry – it all works out for Larry, er– Woody, er– Boris. He is not left a lonely pathetic soul, as he himself predicted he would be; his prediction not based on any bitterness or even human nature, but on the concept that the universe doesn’t work towards comity, but towards entropy. Things fall apart.

The movie, though, ends by giving Boris a few more years of happiness, thankfully not via a Disney Arc, but by simply taking what’s offered him when it comes his way. Whatever works.