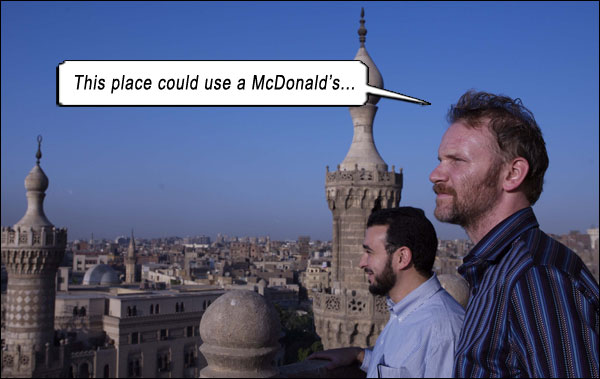 War of the Worlds.

First, he was nearly killed by clowns feeding him junk food (SUPER SIZE ME, 2004), now Morgan Spurlock, insurrectionist, free thinker, the man who caused a sea change in the fast food industry, is nearly killed by all those amerikan and arab clowns in the Middle East, committing to film the issue on every adult mind on Earth since September 11, 2001.

WHERE IN THE WORLD IS OSAMA BIN LADEN?

Let’s understand something from the get-go: the American government (Bush and Obama both) know where to find bin Laden, if they don’t already know his exact home address and cellphone number – but it behooves them to retain bin Laden’s mystique so that one side can fearmonger, while the other side piggybacks off that fearmongering while disclaiming they’re a part of it.

But for the sake of this documentary to work dramatically, let’s make like mushrooms (kept in the dark and fed bullshit). So… predicated on the world’s ignorance of “where” Osama is, Spurlock further asks, “What kind of a world would create an Osama bin Laden?” This secondary question connects his quest with the upcoming birth of his son, which becomes the hook of the film, which is truly the more pertinent question. 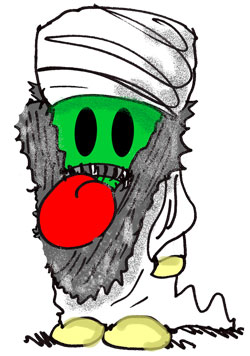 For whether Osama’s mystique is a creation of Amerikan jingoism or not, what kind of a world would need to perpetuate such an icon of hate?Easy to see how some may take offense at Spurlock’s customary lighthearted approach: making Osama dance to Hammer’s Can’t Touch This; Osama and Spurlock as video game characters; representing the key players in the 9/11 tragedy as baseball cards; while in the Middle East, Spurlock phones the Bin Laden Aviation Agency, commenting humorously, “How fitting”…

But this is no half-baked stunt. Spurlock prepares rigorously for his trip, not only with historical research and interviews throughout the Middle East; also with combat training, kidnapping techniques, instruction on dealing with terrorists…

This revelatory documentary will open a few closed eyes and minds: “…a chance to go out and talk to all those people whom we’re told to be so scared of all the time.”

separating the people from The People

Spurlock’s first interview seems to be an incredible exclusive, as he sits down with the uncle of Ayman al-Zawahiri (Osama’s lieutenant! – one would think the criminal Bush admin would have tortured this poor guy already, but we now know that Bush-Cheney did not torture to find bin Laden, rather to gain false info to connect 9/11 to the Iraq War already in progress). Though he is cordial, Uncle’s views on America are terrifying, and not just because he is indoctrinated by propaganda, but simply stating the effects of U.S. occupation: “The seed that was sown by America – a seed of spitefulenss, hate, aggression and killing – cannot disappear in the short term.”

In Egypt, a young student perceives: “The U.S. can no more claim moral ground. People have learned to expect a lot less from the U.S. There are terrorists on one side [al Qaeda] and opportunistic, exploitative people on the other [referring to W.’s friendship with despotic Egyptian dictator, Hosni Mubarak].” The Egyptian people know their government is corrupt and backed by the U.S. government, so “love the American people but hate the American Government.”

It is refreshing to hear these views from intelligent young folk on the streets of these maligned countries, that we never hear on “news” soundbytes: “It’s the American foreign policy [we disagree with] and it’s too bad the American people have to pay for that anger.”

“America is trying all kinds of ways to impose their dominance in the world.”

Invited to dinner with a poverty-stricken family, Spurlock laughs and chats with them; such wonderful, loving people, who have no stake in 9/11 and wish it known: “The people who blew themselves up – they’re not from Islam.”

Spurlock speaks to a Jordan journalist who shared jail time with al-Zarkawi, who told him a reason for 9/11 which frighteningly echoes one of the many fake reasons Dubya gives for his War on Terror (paraphrased): “On 9/11, the Americans played right into their hands. Al Qaeda can’t fight them on U.S. soil so they made them go over there to fight them.”

The studio markets WHERE IN THE WORLD as “the hilarious new comedy from Morgan Spurlock,” as if it is easily-dismissed fluff (in the same manner Jon Stewart’s THE DAILY SHOW is sometimes dismissed as “comedy” even as it takes serious bites out of arrogant bunglers like Jim Cramer, or asks pointed questions to duplicitous politicians like John McCain that are so ludicrously obvious they seem like comedy). But WHERE IN THE WORLD is quite powerful, not as a real search for bin Laden, but as a more objective gauge on the Middle Eastern mind set.

Of course George W. Bush is mentioned – many times – but WHERE IN THE WORLD is not a Bush-bash. Spurlock includes opinions and facts from every level of Middle Eastern voice – professors, journalists, politicians and laypeople – some claim no Arab will give up Osama because he is achieving the jihad they all want to perpetrate on the Americans, while an Islamist activist lady opines: “If it was truly bin Laden who executed 9/11, then he dealt us a bad hand, because he legitimized the American presence in the Middle East.”

swept under the magic carpet

Spurlock has a knack for compacting truths into simple statements. Truth is, after all, quite simple. Accepting it is the hard part. 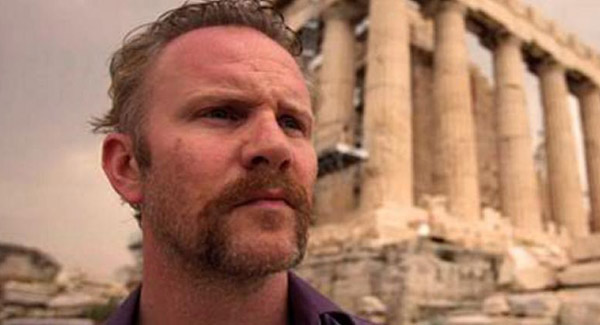 Spurlock: “America has had a policy of propping up dictators for more than 50 years now.” He talks of the 1953 Shah of Iran quite bluntly and names dictators around the world whom the American government support (all, once again, represented by cartoons, to lessen the body blow to American hypocrisy). Easily verified, it is thanks to this Information Age that all these facts Amerikan Government has tried to sweep under the carpet for decades have come to light.

Spurlock: “In order to protect our own freedom, it was okay to sacrifice the freedom of others,” all said in his matter-of-fact style, which is infinitely less flesh-crawling than Michael Moore’s.

Spurlock is definitely the new wave of documentarian. Like Michael Moore, he is not afraid to be a player in his movie, sarcastic and personable, not dry and clinical, making it entertaining to delve into politically charged topics.

An Egyptian-American Muslim clarifies: “As a Muslim we are taught God loves everyone, not that he loves Muslims and hates everyone else.” If this is true, why have we been indoctrinated with the fear that all Muslims want to kill Christians. But I’m not blaming the American government here – maybe we are being indoctrinated by only those Muslims who want to kill Christians – essentially, only listening to the squeakiest wheels. As in America, the wackos command more airtime while the moderates cower under the wackos’ violent fervor.

Another Muslim interprets: “Islam obligates us to be this way; to be brothers with everyone.”

But I’m only buying half of it. Because –

Spurlock’s idea, “To catch a fox, think like a fox,” makes him wonder how bin Laden arrived at his jihadist frame of mind through his life influences. (Which is infinitely more intelligent and lucid than how that cowboy moron grappled with the problem, “Bring ’em on! Dead or alive! Yahoo!”) Spurlock travels to Israel, Saudi Arabia, Morocco, Egypt, the Palestinian territories, views the Gaza Strip from behind the fence, Afghanistan, Pakistan – scary places, because religion is so deeply-rooted, yet denied as the cause of their conflicts.

While standing in a desolate, arid swathe of Palestine, Spurlock notes, “All of this is about land” – but land that is considered blessed or bestowed upon them by an imaginary god. Arab woman: “Jews are the rightful owners of the land promised to them by the Almighty.” This is the attitude bred into those peoples – on either side. They all believe they are right, like people used to believe the Earth was flat. There is no denying them their delusion.

In Saudi Arabia, Spurlock stands before the headquarters of the religious police – that would be the Jedi – on a grate where they actually behead people and let the blood run through the grate.

A Bethlehem City Councilmen in Palestine is exceptionally delusional, “Ours is not a religious conflict – we don’t fight the Jews.”

And when Spurlock visits an area crawling exclusively with Hassidic Jews (with the curls and black hats and longcoats and closed minds), these are the most uncooperative, violently retorting, unfriendly faction of all, physically pushing Spurlock and his crew out of their domain of idiocy.

Spurlock asks someone, “If bin Laden were caught or killed right now, would it make any difference?”

Because the reason for the conflict remains: control over energy resources, not one man’s religious or political cause. Just like killing Hussein did NOTHING. Except further stain the already pitch-black soul of the moron cowboy and his darth dick.

On a trip with the American military in Afghanistan as an embed, Spurlock is interviewing villagers when there is a sudden call to return to the armored vehicles, as the American troops pursue and shoot down an alleged al Qaeda operative in the desert. For the film, Spurlock removes the graphic violence, of course, but the fact is, an armed, running man was shot in the desert by these jarheads with no discerning evidence presented to us, the viewers, on why. Just the “faith-based” argument that he was al Qaeda.

And again, I question the legitimacy of U.S. troops stationed anywhere in the Middle East in the first place. If it weren’t for American interests in oil, would there be any of the displacement talk about “spreading democracy” and “battling terrorism”?

A Saudi Arabian professor: “Osama bin Laden per se is not the problem; the school of thought is; the teaching. He’s a product of the establishment.” The ideology implanted in the minds and cultures of these people cannot be undermined. Osama is only the latest figurehead IN WESTERN MINDS to represent that ideology.

Film ends with Elvis Costello’s (What’s So Funny ‘Bout) Peace, Love And Understanding. Morgan Spurlock never finds out where Osama bin Laden is, but Costello’s song only solidifies the real thrust of the film – not to discover and kill one man whose death will not change the world one iota, but to open the minds of peoples of the world so they won’t need iconic figureheads (gods or men) to tell them how to think, that they may one day drive themselves toward peace, love and understanding.

imdb
Word Count: 1,770      No. 397
Without going full-tilt Conspiracy Theorist,
take this with a pinch of salt and discernment:
ZEITGEIST: THE MOVIE