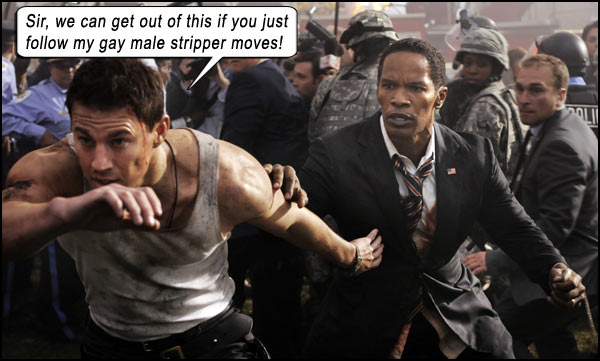 DIE HARDER in the White House with a Vengeance.

WHITE HOUSE DOWN (released June 2013) was sold as the “comedic” version of OLYMPUS HAS FALLEN (March 2013). Is that why we’re laughing AT it? Not that we can even differentiate them; both are the same level of serious, and the same height of stupidity. With the exact same outcome – America wins! Yay! Because – ‘MURRICA!

The White House is taken by domestic terrorists and John McClane is there to– I mean Gerard Butler is there to—I mean, Channing McTatum is there to be Gerard McClane to– I mean – ‘MURRICA!

They even dress Channing in the Bruce Willis Sweaty McT-shirt to leave no doubt. He’s protecting President Sawyer (Jamie Foxx, doing his best Obama – he’s sexy, young, fit, virile; he’s a fighter who can leap elevator shafts with the best McClanes – he’s even chewing Nicorette gun!) But wait! There is so much clichéd backstory here, I suspect screenwriter James Vanderbilt (THE AMAZING SPIDER-MAN) and director Roland Emmerich (2012) copied and pasted it out of the LETHAL WEAPON Action Movie Handbook: precocious daughter, divorced parents, daughter calls father by his name instead of daddy, hero wants to be secret service but fails test, only to save Pres in real life, disenfranchised white guy villains, led by ideological villain who cares nothing for money, but makes it look like he does, Pretty Orange Explosions, bad guys no aim, army no use, media no brains – somebody call Jerry Bruckheimer!

Channing Tatum is John Cale, guardian agent to the Speaker of the House (Richard Jenkins, yay!), but he’s applying to be the Big Man’s boy, interviewing with agent head Finnerty (Maggie Gyllenhaal, so sensual I don’t think I can hold an intelligent conversation with her; I mean, everything she says is in that lilt that subtexts, “Will you lay on top of me naked?”).

James Woods is the disgruntled Chief of Staff who lost a boy in the president’s war and is taking revenge on American values by recruiting bad guys from Dissenters R Us (featuring Jimmi Simpson, Jason Clarke, and Kevin Rankin, who’s cheesing his best Bill Paxton). Finnerty raises the point that it is too easy for an insurrectionist to recruit sympathetic anarchistic, treasonous felons when the White House puts them all in one black list. Something to think about, Secret Service.

The dreamy eyes get me every time…

Now what drives Cale to aid the president? When the thugs start taking hostages and blowing things up, shouldn’t he retreat to protect the Speaker? Not today, as he’s on a White House Tour with his precocious 11-year-old daughter Emily (Joey King, who looks oddly like Ryan Lochte), and she is separated from him when the Pretty Orange Explosions start. Thus, after the president accidentally falls under Cale’s care, he still can’t leave – Not Without his Daughter!

Doesn’t anyone ever notice thugs skulking around in jumpsuits with sinister expressions on their faces? During the White House tour, Obvious Thugs In Jumpsuits are walking past Ryan Lochte and the nerdy tour guide and opening doors that should probably be locked and setting timers and hacking computers… so much for the whoop-de-doo security system. A $4.50 lock on some of those doors would help. And has every action movie in the world not alerted the White House to the fact that every maintenance man in a jumpsuit is a treasonous infiltrator? Just shoot on sight, okay?

Cale takes an interview while he’s there, with Finnerty reading Cale’s laundry list of accomplishments, even though his resumé does not meet White House standards. Why is she even talking to him? Simply to let the audience know his “heroic” background: “…three tours of Afghanistan, rescued a guy from a burning Humvee”—give it a rest! He already knows! Why are you telling HIM? I already had my expositional resumé bullshit stew for breakfast!

When the shooting starts, not one of those hundreds of trained White House agents can avoid the bullets of the thugs. The White House is brought down – including the professional snipers on the roof – in less than 5 minutes. But they can’t shoot Cale – no! – because he uses the John McClane method of diving for cover in slow motion. Movie is reasonable viewing up to this point, even with the overzealousness of the daughter who annoyingly knows more about political issues than the last two presidential candidates combined. After the White House is overrun, it becomes a drone of beatings, shootings, explosions, and cliché payoffs, such as: Cale missed his daughter’s school talent show, which featured her flag-waving (Cale: “Is that a talent?”); cue end scene with daughter waving a flag to stave off the fighter jets about to blow the White House. Single patriotic tear.

Payoffs like President telling Cale he needs to make “one great sacrifice” in his career; cue villain threatening to kill Cale’s daughter and President offering himself instead of Cale! Still, does anyone believe the gun to Emily’s head will go off, spraying brain matter over the Oval Office curtains?

The Vice President (Michael Murphy) orders three Black Hawk helicopters to fly in low and kick some ass; manned with Seal Team 6 – you know, those fictional military superguys that only appear when a political situation calls for the president not to take direct blame for murder. Leads to some great closeup shots of helicopters being ass-kicked and exploding.

This movie really makes us aware of the vast number of “nuclear footballs”! (Those suitcases with the nuclear launch codes.) When the President is considered compromised, suddenly the guys behind the VP bring one out; when the VP is shot down, suddenly out walks another one behind the Speaker. I mean, how many of these things are there? And how can I get my hands on one?

WHITE HOUSE DOWN inadvertently advocates for a fit, young president. Remember when kings and leaders had to be the toughest warriors in their clans? If a situation this intense were to befall the White House, we can truly imagine athlete Obama in this role kicking ass and taking names. Whom we cannot imagine being put through these paces, however, is duplicitous McCain, or shifty Hillary, or even that turnip Trump, all in their 70s, all likely to break hips or die of heart attacks.

WHITE HOUSE DOWN runs the gamut of clichés down to its conclusion, including the trigger-happy Bill Paxton never shooting anyone who is right in front of him, and a bullet being stopped by a gold watch. Single idiotic tear. By putting all the gags in one trailer, WHITE HOUSE DOWN sought to pull in all those who thought OLYMPUS was too dark. But it’s the same tone, and it’s the same treacle outcome, because – ‘MURRICA.