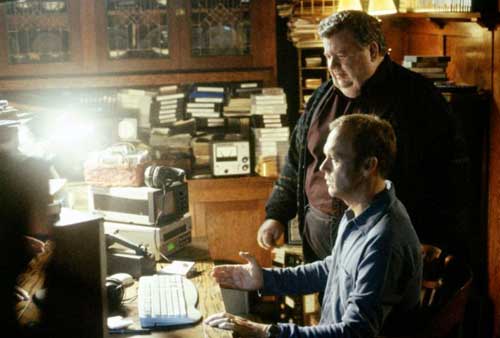 Not only in peasant homes, but also in city skyscrapers, there lives alongside the twentieth century the thirteenth. A hundred million people use electricity and still believe in the magic powers of signs and exorcisms… Movie stars go to mediums. Aviators who pilot miraculous mechanisms created by man’s genius wear amulets on their sweaters. What inexhaustible reserves they possess of darkness, ignorance and savagery!
— Leon Trotsky.

Apparently, dead people can be heard through any electronic device with a microphone input. It’s called EVP (Electronic Voice Phenomena). And all this time I thought it was called Karaoke.

I suppose the 1957 Z-movie, THE DEAD TALK BACK (resurrected for lampooning by MST 3K) was so hideous and imbecilic that it needed to be remade as WHITE NOISE. The 1957 version was better, with the professor’s fake real beard and the honking coffin.Nothing as sensible in this film, although Michael Keaton does get his Beetlejuice on and wastes his considerable acting talents staring at white noise and deciphering messages his dead wife sends him: that someone is going to die in a car accident; that someone is going to be stabbed; that someone should have swallowed his pride and auditioned for BATMAN BEGINS…

Like every unsubstantiated and specious pseudo-science (Phrenology, Intelligent Design, et al), endowing EVP with a name that sounds like it was coined by the Professor from Gilligan’s Island seems to grant it a modicum of legitimacy. When in fact, it has as much credibility as those hippie knuckleheads who used to light up and spin their Zeppelin albums backwards, “decoding” the devilspeak they thunk themselves into discovering. 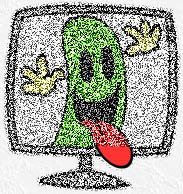 From beyond the vegetable patch…

The “experts” advise that when you first try recording the thin air, you won’t hear Beyond The Grave voices immediately, because it apparently takes awhile for the deceased to master the art of voiceover, and because most of them haven’t debased themselves and humanity by appearing on AMERICAN IDOL to learn how to “woik” a mic – but mostly because it’s just plain asinine horse manure.

Successful architect, Jonathan Rivers (Keaton), traumatized over his wife’s mysterious death, falls for the legitimacy of EVP so quickly that we are apt to harumph over his turn of mind – until we realize that these are precisely the types of irrational folk who are preyed on by the pseudo-science purveyors – they need not be ignorant or even weak-minded (although that surely helps); they just need their traumatized condition to prevent them from thinking straight.

The chumly presence of Ian McNeice as Raymond, the EVP purveyor (obviously not the car-salesman type on the con), is meant to put us at ease – but that makes Rivers all the more temporarily insane in believing that the ambient noise he casually records – for no apparent reason – is dead humans talking. At least it is quite transparent that douchebag charlatans like John Edward do it for the cash – but dabbling as avocation places you higher on the Get A Life chart than middle-aged dweebs owning self-designed lightsabers.

Whilst Rivers views “legitimate” images of dead folk on a grainy computer monitor, intermingled are always three shadowy images, whom we deduce are, in fact, the three aliens from LOST IN SPACE who wanted to abscond with The Robot – remember those faceless mimes with the bowler hats and capes, swaying and intoning, “We want the mechanical man!”? Closely resembling the infamous “Shadow Man” from a 1980’s TWILIGHT ZONE episode, after decades in the “Where Are They Now?” bin, they cryptically hound Rivers in this film, appearing with joltingly loud soundtrack stabs just as we’re assuming a comfortable dozing position.

Never mind that the Good Christians who would fall for this storyline (Rivers’s deceased wife foretelling where tragedies are going to occur so that Rivers might intervene and save lives) do not even realize that any form of pre-destination heretically negates “free will” – which is what your Good Christ was all about; never mind that even though Rivers is present at two murder scenes, the police never hold him for questioning; let the story unfold illogically for the sake of the bonehead “believers” – they can’t tell from reality anyway.

A psychic tells Rivers, “It’s one thing to contact the dead,” (an imbecilic statement at best), “it’s another thing to meddle – and you are meddling! They urge you to stop!” Now let me get this straight: he is saving lives that are being put in jeopardy by the Shadowmen. So who exactly is urging him to stop “meddling”? The Shadowmen – so that they may continue to willfully end lives prematurely? And if so – why urge him to stop? Wouldn’t they relish killing a meddler? Or is Rivers upsetting the natural balance of Who Stays and Who Goes, befuddling both God’s and Death’s book-keeping? Is God the one urging him to stop? But shouldn’t God want Rivers to intervene in the nefarious doings of the Shadowmen? Is it not the Shadowmen who are muddling God’s books with their premature killings? Guess I’ll have to call Dionne Warwick for this one…

The storyline is resolved about as clearly as EVP is explained, when a killer who is controlled by the Shadowmen is himself killed by police in the end, with Rivers being killed by the Shadowmen, which leaves exactly THREE spirit killers still on the loose. I suppose the killings will only begin again when the Shadowmen sign for a sequel: “We want the mechanical royalties!”

As with all pseudo-sciences, rules change when the plot calls for it: Raymond told Rivers the voices must be recorded and played back to be heard – yet at movie’s end, Rivers himself “comes back” directly via a radio, to assure his son that yes, even death cannot quell redneck ignorance.

Being a pseudo-science (a euphemism for Pure Life-Wasting Bullshit), you’ll be hard-pressed to find any reputable information on EVP, besides the obviously laughable fringe dwellers and their wide-eyed tall tales, but you can read about the EVP instigator at WIkipedia:
Konstantīns Raudive

But don’t worry, if you laugh yourself to death, you can always TALK your way out of it through someone’s ham radio…