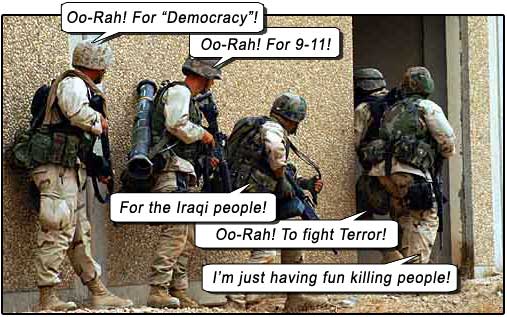 First of all: Who’s “we,” sucka? WHY WE DID IT, an MSBNC documentary, narrated by master journalist Rachel Maddow, details the deep background on why president George W. Bush and his slavemaster VP Dick Cheney took the United States to war in Iraq in 2003 under false pretenses. 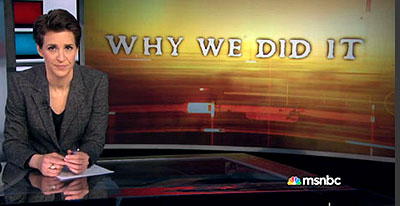 ”…and now for something completely indifferent…”

Everyone knew the pretenses were false (weapons of mass destruction, democracy, 9-11, war on terror, liberation, empire building…) Everyone knew it then. Everyone knows it now. This TV documentary just corroborates what we already knew, with ex-administration tongues wagging more freely, the passage of years assuring they won’t be disappeared for coming forward and tattling on the W administration. 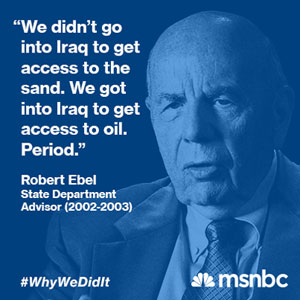 And UNLESS this doc and this information serves to put those hubristic war pigs away or put them to death for their felonies, I don’t see the point in it. Why We Did It: We already know. What Are We Gonna DO About It? – THAT is the question; while those criminals walk free, at every opportunity boasting of their crimes!

The reason: prosaic.
The prosecution of the lie: Machiavellian.
The plan: to make Iraq a client state of America and control the oil.
The reality: the military intervention destabilized the region, and destabilization leads to higher oil prices.
Good work, dumbasses!

Copious de-classified documents (from January 2001 onwards) reveal plans to annex Iraq long before 9-11. Details about secret meetings are revealed, and the disparity between the Bush admin’s public arguments for the war (“It’s not about oil, but WMD”) and the fact that they were holding war meetings in the offices of contractors whose raison d’être was oil – Kellogg Brown and Root (KBR) and Halliburton – not at the Pentagon or White House. 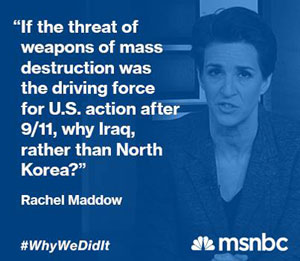 Prime Minister of England Tony Blair sends troops into Iraq after his pimpmaster Bush, and then publicly denies it is about oil, while secret documents from that period reveal the Blair government, the Bush government and BP all in collusion specifically referring to oil pertaining to the Iraq invasion.

Maddow, with her usual perceptive incisiveness, outlines one of the simplest pieces of evidence that proves it was never about WMD: the fact that North Korea was admittedly working on nuclear weapons, and detonated one in 2006, in defiance of U.S. protocol. If the vocation of the Bush administration was to seek out and prohibit WMD, then why not turn their attention to North Korea? Because, uh… Answer: BECAUSE IRAQ IS SWIMMING ON A SEA OF OIL. And North Korea isn’t…

WHY WE DID IT is a jaw dropping exposé, mostly because the axis of evil (Bush, Cheney, Rumsfeld) are still roaming free after this mountain of evidence enough to convict any civilian. The amount of lies committed to video is staggering. (Defense Secretary succubus and Walking Lie, Donald Rumsfeld: “It has nothing to do with oil, literally nothing to do with oil!” An oft-repeated quote, bald, blatant, unequivocal, unrepentant, untrue.) They took the U.S. to war under false pretenses, were responsible for the deaths of millions under those pretenses, and though much has been protested and written against them (notably The Prosecution of George W. Bush for Murder, by lawyer Vincent Bugliosi, 2008), it seems they will never be brought to justice. God Bless Amerika!

Some of these talking heads – like Vogler – are inexplicably still under the delusion that the war was NOT about oil, because they were told it was not by the government!