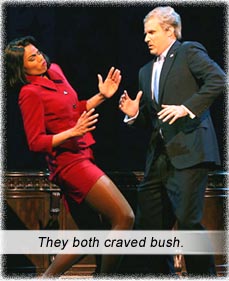 He’s mad, bad and dangerous to know, and the 43rd president of the United States is made to look even stupider than usual in Will Ferrell’s one man show, YOU’RE WELCOME AMERICA – A FINAL NIGHT WITH GEORGE W. BUSH.

Will Ferrell has played W. since his days on SATURDAY NIGHT LIVE (a high point being adding the word “strategery” to the political lexicon) and now brings us the cowboy moron after the election of “that Tiger Woods guy” for one last long goodbye.

Using a vocabulary that Bush wouldn’t and couldn’t use, Bush (Ferrell) – as intimated by the show’s name – tells America about the great job he did for her and laments how he was wrongly maligned for doing it.

It’s not an extraordinary or exceptionally insightful monologue, but it is funny at times, because Bush is an easy target. We know the man is the most prominent example on the planet of The Peter Principle and yet staunchly refused to educate himself, or even acknowledge he knew not what he was doing. So Ferrell can take easy shots with malapropisms, mispronunciations and golden quotes like, “where wings take dream…”

And it is unfunny at times, when Bush mentions waterboarding or Cheney or WMD – aspects of his administration that have caused – and are still causing – widespread agony for millions.

So Ferrell keeps it lowbrow – which is an overall disappointment. If you want biting satire, watch THE DAILY SHOW or THE COLBERT REPORT. If you want insightful, almost poetic castigation of the Bush administration, watch COUNTDOWN WITH KEITH OLBERMANN or THE RACHEL MADDOW SHOW. If you want to giggle without thought – much like watching any given Will Ferrell movie – then YOU’RE WELCOME AMERICA is your popcorn pleaser.

One of the few smarter gags features Bush doing Poppy yelling at him: “How come you’re the only one of us who speaks with a Texas accent?” As PluckYouToo.com notes, “He got to the core of it–that the Bush we knew was a meticulously crafted figurehead.” At another point, Bush imitates White House officials chastising him, and we hear definite deep-buried rage in Ferrell’s voice, “Please listen! For once, just listen! That’s all you have to do, is sit there and listen! We do all the work! You don’t have to do anything but sit there and listen!”

The irony of Ferrell eschewing smarter humor is that “liberals” are smart enough to understand witticism, irony and sarcasm, yet the humor is structured so that even Republicans will “get it.” And all they will do – when faced with their favorite unfavorite son being lampooned or even featured in any liberal-leaning forum – is castigate, vilify and excoriate, like the small-minded, vicious goons they are. Prime example this show is for lowbrows: a picture of a naked penis onscreen garnering the loudest laughs, used as a callback time and again when Bush’s funniness flags.

Ferrell is not an impressionist like Kevin Pollak or Frank Caliendo; it’s just Ferrell in gray hair makeup, doing that Hunchback impression with the squinty eyes and jerky delivery. And the impression wears thin, especially when Ferrell drops out of character during the middle melodramatic segment of the show.

At first, Bush is the apologist – we know this characteristic is intrinsic to this weasel; we’ve all heard those exit interviews where he placed the blame of his negligence in averting 9/11, Katrina’s response, causes of the recession, etc. on Anyone But Himself – but towards the middle of the act, Ferrell himself becomes apologist for Bush, as he unwittingly drops out of character to mourn the deaths of American troops in Bush’s two faux wars of choice.

Ferrell/Bush: “I’ve been asked, Knowing what we know now, would we have made the same choices? Sure we would have adjusted a few things, but in the choice between freedom and tyranny, we must always choose freedom.” Except the wars are not about freedom, Will. And there was never any room for adjustment in taking a country falsely into fake wars – there was one talking point path into them – and no exit strategies. And Bush’s method of “choosing freedom” was tyranny of two other countries. And Ferrell says it all with a face wracked with introspection; this is not irony.

“Has the war weighed heavily on me? Sure it has. I think about it every day. Do I cry about it? Every day… I cry for the parents who have lost a son or daughter… I also feel for the hundreds of thousands of Iraqi civilians who have lost their lives.” All very humane things to say – and all demonstrably incorrect when it comes to George W. Bush! The war continued out of sight out of mind of this feeble-minded president while he gallivanted around the world making monkey faces, while he promised – like the juvenile eight-year-old he is – to give up golf and biking and candy and was then busted golfing and biking and making monkey faces for candy. Idiot.

And then Ferrell/Bush asks for a moment of silence to honor the dead. But that’s not Bush’s voice any more. That’s Will Ferrell. Bush treated the troops under his command like offal during his empire-building gone awry, his contempt for them illustrated quite clearly from his flippant saluting style to nonchalantly sending them off to die for Dick Cheney’s Halliburton-sized wallet.

The real Bush never said those words with as much acting finesse as Ferrell. What this little interlude does is bring to light the sobering fact – a little too sobering – that the 43rd president of the United States was a lying, unfeeling, ignorant monster. And ironically, this truism of incognizance, which is the bread and butter of this act, when highlighted so gravely – ruins the act.

It’s as if Ferrell has done all this skewering with respect and love.

Ferrell’s brother, Patrick, plays Bush’s dancing Secret Service agent; Pia Glenn plays Condoleeza in a stripper-dance cameo where Bush admits his aching love for her; Michael Delaney plays an audience plant who eventually throws a shoe at Bush. And Ferrell does some good stand-up ad-libbing when he gives audience members nicknames suited to their jobs.