Rigorous love-game and stalking game-play – or is it the other way ’round? – make WIMBLEDON an enjoyable afternoon on the green. 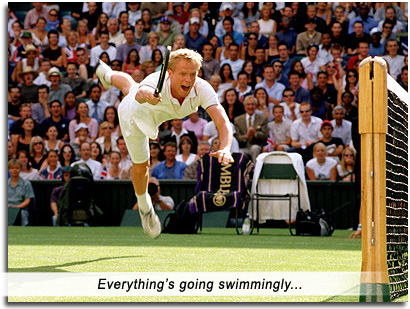 Peter Colt (British Nice Guy Paul Bettany) was once ranked 11th in the tennis world; now in his thirties, he finds himself 119th and dispiritedly shopping for jobs as a tennis instructor. But he’s going to give Wimbledon one last shot before announcing his retirement. (And during that announcement, the Hot Young Tennis Stud (Austin Nichols) enters the press room and dilutes even that one last moment for Peter.)

Lizzie Bradbury (American Bad Girl Kirsten Dunst) on the other hand, is a rising tennis star, here to breeze through Wimbledon, her iron-fisted manager-dad Dennis (Sam Neill) watching over her.

Peter and Lizzie Meet Cute on a tennis court (where else?) and start romancing the hell outa the film (you know, going on walk-dates with ice cream in parks and laughing at stuff that we can’t hear because the boppy source music is playing over the audio of the sickening montage). When reporters find them holed up in hotel rooms, the press jumps down their throat – as does father Dennis (Sam Neill hasn’t been this menacing since he was the Anti-Christ), warning Peter not to distract his daughter from her tennis career.

He keeps winning because of her. She keeps losing because of him. Obviously, because like any guy, he’s just fucking, and like any girl, she’s taking it way too seriously. He soars through match after match with Lizzie in the stands, while she – who arrived at Wimbledon prepared to win – struggles through her matches. It gets a tad non-believable when he’s climbing trestles to sneak into her hotel room against the wishes of Dennis 666… 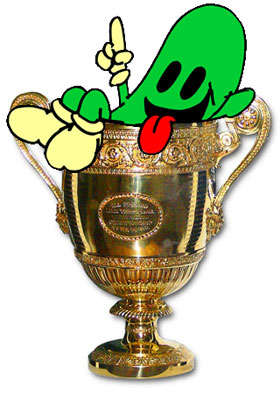 For those who could care less for all the tennis racket (ha! See what I did?), WIMBLEDON is produced well enough not to bore us with tennis being the focus – match play is compressed and kinetically shot – yet for tennis buffs, it’s more thrilling than being there for these very reasons. Authentic? It is shot at the All England Club itself –  Wimbledon. And the tennis form of all the principals looks very professional – maybe not championship level, but definitely not weekend warrior banality with bended elbow and over-running the ball. We are either seeing very good rallies culled from hours of play, or seeing very good special effects. Either way – it’s got balls. (Ha! See what I did again?)

Bernard Hill and Eleanor Bron are Peter’s polar opposite parents (mum pretends not to be interested in Peter’s matches – she loves him unconditionally, while dad fanatically carries a portable TV with him everywhere in the house, digesting every grass court point). James McAvoy is comic relief as Peter’s porn-loving brother, who constantly bets against him, to the chagrin of even his bookies: “If he loses, I make money, if he wins, I get laid!” Nikolaj Coster-Waldau is Peter’s coach, a fun/flip interaction that proves poignant in the end. Real life tennis legends John McEnroe and Chris Evert are commentators.

And then – Favreau Favreau Favreau!!! The swinging director of IRON MAN (who would relegate Paul Bettany to a faithful computer butler in that film) turns up as Peter’s agent – due to Peter’s rise in prominence, ready to cut promotional deals with him again.

So the flow chart is rallying smoothly: boy meets girl, boy loses girl, boy gets girl back. But WIMBLEDON establishes it is not a juvenile romancer, so we cannot bank on the smash-shot of the boy getting the girl and winning Wimbledon. We can see a net-ball coming, where the filmmakers will resolve the romance, but then to balance Peter’s life, won’t let him win the title. Wouldn’t it be just plain greed to nab fame and fortune as well as the girl? Love is all that matters, right?

But as Lizzie says when she’s breaking up with him: “I really don’t love you. Love means nothing in tennis – zero.”

If we thought the Wimbledon Finals tennis match would be tacked onto the end of the movie like an afterthought, the whole third act is the match, drawing out the suspense to divot-punching proportions. Let the nail-biting begin. Is it actually OUR greed that the filmmakers are playing on?

But it’s an unfair advantage from the get-go: Consider that Peter can track every nuance in the ball bounce, every trajectory and uneven patch of grass, every strike potentiality… he’s Iron Man’s computer!