avid Petraeus, though resigning as CIA Director under inauspicious circumstances, is being heralded as a warrior poet, a god-king, a “legend” who “saved the war in Iraq,” “one of the outstanding generals of his day”; President Obama effused that Petraeus “served with intellectual rigor, dedication and patriotism.”

But David Petraeus is a piece of shit.

Why? It’s not because he was a four-star general in the mindless Amerikan military (that just means he was deluded), and it’s not because he was commissioned to Iraq in 2004 as Commander of the Multi-National Security Transition Command to sort things out, and bungled it into worse shape before he left (that just means he’s a failure); he’s not a piece of shit for testifying before Congress in September 2007 on Middle East strategy where he merely parroted sweet nothing talking points that the George W. Bush admin wrote for him (that just means he’s an empty-headed puppet – we could almost see the hand of Cheney squirming up the inside of Petraeus’s medal-bedecked rectum); and it’s not because he decried torture by Bush-Cheney (that actually displays a sliver of honor); and it’s certainly not because he had an affair (that just means he’s an Old Dog. That element actually has the least bearing on his character, and is getting the most press. All men have affairs. You heard me, ladies: ALL… men have affairs. Yes, even yours. And even me. Whoever I’m with right now – trust me, I’m having an affair on you.)

Here’s Petraeus’s wife, Holly. And that’s his biographer Paula Broadwell, brushing her 34C’s up against David’s camo. Who would YOU rather tap? I admire the man for that score.
But that’s not why we’re here…

The reason David Petraeus is a piece of shit is because after decrying the Bush-Cheney policy on torture when he was a military man, as soon as he was promoted to Director of CIA in 2011, he testified before Congress that it was necessary for the CIA to retain torture as one of its “interrogation techniques.” He cited the “ticking time bomb” scenario as his “evidence.” Talk about absolute power corrupting absolutely…

This was no feckless, off-the-cuff comment; it was planned and worded meticulously, so that he could “talk around” it and maybe fool some of the people some of the time; only through careful parsing could we discern its reprehensible thrust. Now the statement could have been made because Petraeus had designs on the White House in 2016 as a Republican, and wanted to stake his claim as yet another opprobrious Republican swine, in which case his flip-flop from his previous principled position makes him a weak-chested fluff like that pitiful excuse for a man, Mitten Romney. And if he truly meant what he said, well, that’s even worse, innit? Whatever his reason, we are left with one sure thing:

The man wants to torture people.

Now I don’t disagree with torture as a concept. Sometimes it is useful and justified. For example, I would love love LOVE to torture Dick Cheney. He’s a known felon who has committed innumerable crimes and affected millions of lives adversely with his wars of choice, hiding behind the skirts of his attorney-amended statutes declaring torture is legal by calling it something else and puppeting Sean Hannity to spread the word. I would love to torture that noxious maniac. And I would love to torture Sean Hannity. Because he knows better and still chooses to dribble Republican poop from his salad-tossing mouth. (Hannity actually assented once that he wouldn’t mind being “waterboarded for charity” claiming it wasn’t that bad. Political Commentator Keith Olbermann pounced on this unmitigated stupidity, challenging Hannity every day to go through with his chest-beating claim, pledging $1000 for each second that Hannity endures it. The Coward Hannity never went through with it.)

My disagreement with torture is with the wielders and abusers of torture. It’s not even the illegality or immorality that bugs me. Put that aside. It’s that these people (read as Republicans and their unofficial leaders in the entertainment media – Limbaugh, Hannity and O’Reilly) want unilateral power to detain people without any evidence and without the right to legal counsel, and the subsequent authority to employ what they call “enhanced interrogation techniques” (aka torture) until they hear a “truth” they want to hear.

Does this sound vaguely familiar?

If she floats, she’s a witch and must be burned.
If she sinks and dies, she’s innocent.
Oh yeah, and she turned me into a newt! …But I got better…

The witchfynder generals have not disappeared! They’ve been in hiding, under the guise of military men and priests and Republicans. 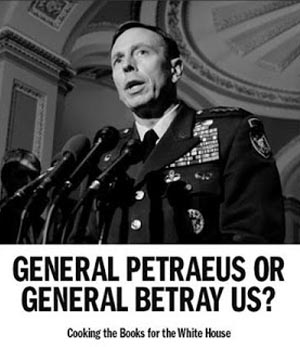 Bush’s bumboy. Gutless, deceitful, failed leader General David Petraeus, providing spin-doctored reports on Iraq strategies that would allow him to retain his job, that of flexing the military phallus that stood in lieu of the Bush admin’s collective small-dicked insecurities.

In September 2007, during Petraeus’s Report on Iraq, MoveOn.org ran this full-page ad in The New York Times, accusing him of “cooking the books” for Bush. (Well, it earned him more of that fruit salad of meaningless medals on his craven chest.)

Pundits effuse over how Petraeus “changed the course of the Iraq war” implying that victory was snatched from defeat–but we all know exactly what happened in Iraq: prosecuted illegally under false pretenses, no exit strategy, fire-hosing American money down the drain; ended by next administration in a whimper of frustration and impotence; an American defeat, like Viet Nam; like Afghanistan is going to be. The mission objective was never elucidated and never achieved, hence, failure. What exactly did Petraeus change?

Torture is the new witch burning in America. And David Petraeus is nothing more than a witchfynder general. A medieval-minded sadist who craves absolute unallayed authority over life and death. (Any wonder the blinkered media that finds nary a fault with this “hero” is disparaged as ‘the cult of Petraeus’?) The arrogance and low character of this swine! And – like the witchfynders of olde – I bet he wouldn’t mind a few naked rituals in the forest with some of his wayward charges. Why do you doubt me? He’s just proven this last statement with this affair!

Again I have to ask: Is it really a surprise when a powerful, dishonest man is getting laid with a fit young chick behind his wife’s fat back? The funniest thing about this whole affair, so to speak, is that over the last few days of coverage, I have yet to hear any sympathy for, much less the name of, Petraeus’s wife, Holly. All the reports just focus pruriently on the chick with the great tits. Sells advertising…

Petraeus: “Character is what you do when no one is watching.” Oh, is that what you call what you were doing with your biographer on those long jogs? Petraeus has shown his true character with his plea to Congress to retain torture! Does he even realize he is advocating for an illegal act? Yet the media has totally forgotten about his whining for waterboarding. They just wanna spend a little quality time with that fit young chick’s… uh, “character.”

Petraeus is the head of the CIA–and he can’t keep a simple adultery affair covered up?! He’s the boss of an unethical, mercenary organization that routinely “disappears” people in the black of night, that renditions suspected “terrorists” whose families and friends never hear from them again, that assassinates dictators and emplaces kings and is FILLED WITH PROFESSIONAL SPIES–and he can’t keep a pathetic affair under his hat?!

David Petraeus (former four-star American general, former Commander of the International Security Assistance Force), resigned his post as Director of CIA, citing an extra-marital affair as the reason. In successive days, it is revealed the affair was with his biographer, Paula Broadwell.
— by Jon Dunmore © 13 November 2012.

David Petraeus:
The Case for Torture

THE PROSECUTION OF GEORGE W. BUSH FOR MURDER
by Vincent Bugliosi