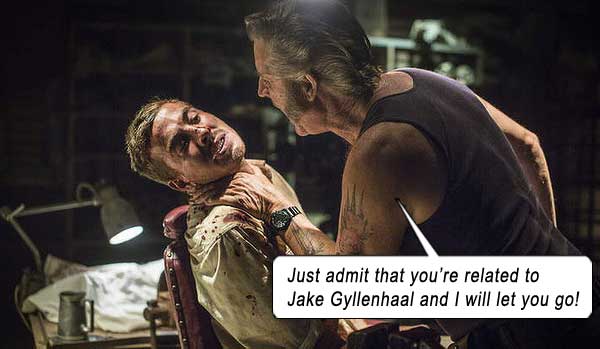 Greg McLean’s WOLF CREEK (2005) was a good movie for a number of reasons, one of them being, it was a body-horror thriller removed from the “Hollywood” system. It oozed Made in Oz. But WOLF CREEK 2, even though helmed by the same director-writer, looks and feels like La La Land.

All we know is: the filmmakers pushed the envelope on violence, body-horror, car stunts, runtime, padding, torture, and Pretty Orange Explosions. Exactly the formula Hollywood employs when it grinds out a sequel. The only true blue Aussie thing remaining – is Mick Taylor the serial killer. And there’s even something not right with him, besides his penchant for rape and torture.

Mick is now the hero.

In literate society they call it Stockholm Syndrome. McLean has succumbed to that decidedly American trope of re-painting the bad guy as the good guy. But Mick’s still a serial killer, you say. Yes, but now you WANT to see him molesting women and creatively carving surfer bois. He is so “beloved” now that Mick is onscreen from the first scene, in a trope usually reserved for the hero of the film – showing off his principles, his machismo and his daring; in this case, two crooked cops give Mick an undeserved speeding ticket, and Mick promptly wipes them both off the face of the Earth. Yes, it’s satisfying and vicariously exciting, but this conceptual change in the tone of the movie annoys me from the outset. Mick is Clint Eastwood meets Wolverine meets The Terminator.

The first WOLF CREEK opened with a party, as we followed three kids on a backpacking journey. The villain did not appear until an hour into the movie. We were in the normal world until it was upended by the serial killer. (I even made mention of that filmic technique; of keeping calm and even-keeled, so that the madness to come is accentuated.) Now: we start with two over-the-top cop murders in the cold open, then the titles, then a party; thus, now the party people seem like they are intruding into Mick’s world, and in Mick’s world, serial killing is OK.

These insidious mind-tricks are not enough to totally diminish the escapism of watching a fantasy about a serial killer, but they manipulate us into hypocrisy.

“Cor blimey, mate! You’ve come a gutsa! Nothin’ that a slab an’ a shiela won’t fix!
And Bob’s ya mother’s brother!”

Once again, the movie could easily derail were it not for the reactions of the victims. Director McLean, as he did with the first movie, still pulls compelling performances from people who are caught out confronting malice that they cannot process. Graphically dismembering Rutger is the movie’s most disturbing scene, and Katarina’s screams are from her soul. This is the man she was just snuggling with; the past they shared, the future they planned – gone, dead, nothingness. Mick, in that gargling snigger, pulls back and saws on the lifeless neck of the man she loved and it comes off in his hands – and there is madness in her bulging eyes. Choking, shuddering, twitching, her mind breaking at the sight. Mick promises her they are gonna spend a nice warm few months together…

Still, see how quickly they got to the stabbing. No buildup, no drama. When Katarina runs, she is picked up by a guy in a car. At least she and her boyfriend got a one-day montage before Mick hunkered in – this guy in the car gets NO characterization. We only learn his name is Paul (Ryan Corr), and from his accent, we hear he’s British, and his whole deal is just fleeing with Katarina in his car with Mick on his tail. That’s why the movie feels disjointed from this point, because Katarina is shot and killed by Mick, and our attention is suddenly turned to Paul – a nobody who stumbled onto the scene, and is now seemingly the focus of Mick’s attention (and, by association, our attention).

Vehicle stunts are flat out like a lizard drinkin’, including a mob of kangaroos stampeding across the freeway and being mowed down by the semi – crikey! – however, we’ve lost the throughline. Who is the hero and what is he trying to achieve? Well, everyone else is dead, so I guess we’re stuck with THIS one-dimensional Paul character that we don’t really care for because we know nothing about him, except that he’s running from Mick– Wait – is Mick the hero? Don’t do this to us, movie…

Paul’s car half-drives/half-flies down a steep mountainside and smashes into a rock. Paul thinks it’s over. We know it’s not. Still, we are unprepared for one of the greatest vehicle stunts ever – as the semi-trailer careens over the top of the incline, maximum air, arcing down the mountain and slamming into Paul’s car at the bottom–

CUT TO: Paul tied in chair, Mick about to cut his tongue out—

At least, that’s what should have happened. Instead, tedious chase padding ensues – only to end up at the same place – Paul in the chair, in the film’s premier scene. Paul somehow stays Mick’s hand by unexpectedly launching into Tie Me Kangaroo Down, Sport, a legendary Aussie rural ditty. Mick’s curiosity is piqued and he proposes giving this “Pommy cunt” a fighting chance with a game of “10 Questions – answer five correctly and you go free!” This morbid (and informative) sequence is as compelling as Christopher Walken and Dennis Hopper facing off in TRUE ROMANCE.

“For each one you get wrong, I get to grind up a finger.”

And Mick lets fly his psychopath xenophobe flag: “You’re nothing but foreign vermin, a stinking introduced species. And it’s up to my kind to wipe your kind out!” Hmm, the xenophobia seems retconned, considering Mick’s male victim in the last film was a fair dinkum Aussie.

But here’s the real crime about this xenophobic outburst: Mick had no idea Paul was British until after he captured him. And even then, Mick had no clue of Paul’s heritage while he was tying him to the chair – it was only when Paul SPOKE that Mick heard Paul’s British accent. So in Mick’s final threat, is the movie saying that if Paul was Aussie, Mick would let him go? So Mick’s pathological chasing of Paul was because…? Sorry to say that in these last few minutes, writer-director Greg McLean got more lost than his victims at Wolf Creek. But I’m sure Dumbo Donald would be happy his message of racism has reached Downunda!

WOLF CREEK 2 opens with the same title cards as its predecessor: “30,000 people are reported missing in Australia every year” and “based on real events.” Well, not really. Then the outro title cards really discredit the movie’s “true” tag, as we are told the authorities ignored Paul’s claims of an outback gunman. Even with all those unsolved murder cases, you guys don’t wanna send out a little reconnoiter party or some-such? No? Instead, we get the last indication that McLean has gone Total Hollywood: the hero shot of Mick, like The Man With No Name, striding away from camera, fading into the outback haze, a mythic wraith, a silent guardian, a dark knight.…