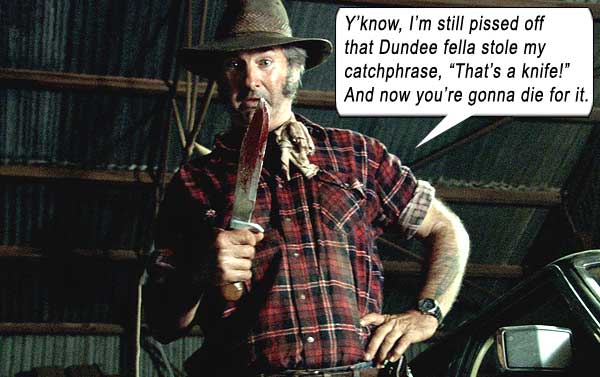 Two British girls, Liz (skinny, square-jawed Cassandra Magrath) and Kristy (blond busty Kestie Morassi) team up with low-education-taut-abs Sydney surfer-boy Ben (Nathan Phillips), to drive across Australia in a shitbox he just purchased, hitting tourist hotspots along the way. Without a care in the world – until their car won’t start at the deserted crater.

That night, a weathered bushie in a workhorse truck named Mick Taylor (John Jarratt) stumbles upon the kids, his ocker accent broad enough to kill a snow white boomer. They accept his Aussie hospitality to tow them to his place and fix their car. After an hours-long drive, they arrive at what looks like an industrial compound, where they have a drink around a fire with the amiable Mick, who seems like a lonely soul who just likes to jabber to the few strangers he must occasionally encounter all the way out here. In the middle of nowhere…

And Australian cinema would never be the same. 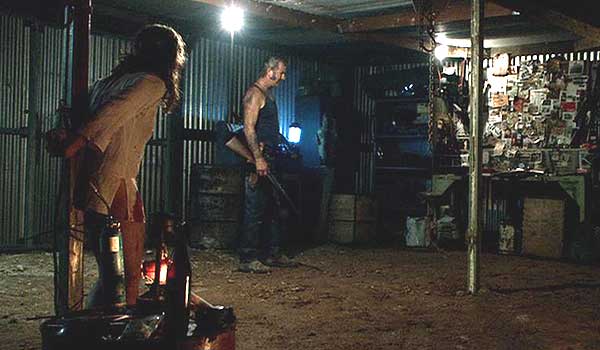 How we can tell that someone is truly insane: The chick is tied to the pole with her clothes on.

Produced, written and directed by Greg McLean in a fair dinkum debut, what sells WOLF CREEK as a gritty grindhouse phenomenon are the incredible performances, especially the authentic horrified reactions of the victims.

We have grown too inured to cartoonish American horror reactions (for example: the high-pitched “EEEEEEEE!” female scream – a trope unironically exemplified in the irritating screams of every female in SPIDER-MAN 2, who sounded exactly the same, no matter their age, weight, health or social upbringing – and the macho male take-charge reaction), so we have forgotten what it would truly be like to shine your flashlight on decomposed human bodies near you, or to have your fingers suddenly sliced off, or to witness a hanging dead body with its upper half mutilated, and the flesh completely scraped from its lower skeleton, leaving only its sacrum and pelvic girdle exposed, and – no legs.

Low-throated yells, choked gargles of fear, strangled howls from your limbic brain, trying to imagine how that dead person’s mind must have twisted in on itself while being slowly murdered; when your own body is cut open, your face reacting to the circulatory shock of severed arteries suddenly gushing open, heart flailing with sudden depressurization of its closed circuit; no trying to look pretty for the cameras and tabloids. These are the kinds of reactions we get in WOLF CREEK, Greg McLean proving himself a director-producer of untold resourcefulness, able to achieve his iconoclastic vision with no budget!

The two girls effect a partial escape and one leaves the other alone to go back for a car; the abandoned girl jabbering incoherently, pleading, begging not to be left alone; it might seem irritating and childish, but we realize she is perfectly embodying someone who has just gone through such a traumatic experience – of being bloodied near a dismembered body, hanging not five feet away, her molester joking that he spent a few sweet months with that corpse “until I took her head off.” Reports that Morassi (Tits) pulled such a realistic, terrified performance when Mick was torturing her that female crew members were visibly distressed; at one point the director stopping a scene because he thought Jarratt was actually hurting her.

That’s how real this film is, Movie Maniacs.

Not just gore gore gore, WOLF CREEK is controlled filmmaking at its best. Shot on a HD handheld cam, director McLean is in no hurry to reveal the villain (who appears more than an hour into the runtime), as we crash an overnight party with the kids; laze the road trip, planned from Western Australia to Queensland on the east coast, taking in the grand Australian outback steakhouse vistas, feeling the grueling tarmac and sweltering heat (–by the way, Skinny wakes on the beach in Western Australia and sees the sunrise… uh, it’s the WEST coast, people… the sun doesn’t generally rise in the west – unless it wants a cameo in your indie film, I guess); the mutual attraction between Abs and Skinny, acted upon while overlooking the crater. All this is not so much to flesh out characters – they’re your basic good-lookin’ brats with not much going on up top – but to establish a sense of normalcy that will be shattered when they encounter the psychopath. (Still, we can’t help but feel sorry for the two, as they would have been hoping to fall into each other at the next campsite after sharing that one expectant kiss on the crater’s lip – and would sadly never get that opportunity!) McLean employs glutted, close-cut cinematography in the last act (to oppose the open-skied vistas in the first act) that pulls us hyperventilating into the desolation and claustrophobic horror of the kids.

The aerial shots show the actual Wolfe Creek Crater (different spelling – to protect the innocent crater?), in the northern part of Western Australia, but the film is shot in another state altogether – South Australia.

The jolly swagman Jarratt is cast seemingly to defy our expectations. Well-known in Australia since at least 1980, with his turn as a young, handsome Ned Kelly in THE LAST OUTLAW (anyone who plays Australia’s most infamous iron man is set for life!), he now looks like your larrikin uncle and sounds like Paul Hogan arguing with Steve Irwin. But proves himself as diabolical as Hannibal Lecter and unstoppable as a Terminator. 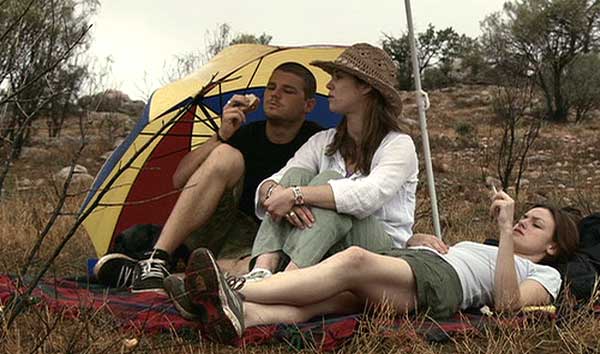 Wolf Creek: famous for its crater and its threeway picnics.

Opening title card claims WOLF CREEK is “based on real events” — if by “based on real events” they mean NOT based on real events. The closing title cards (“After 4 months in police custody, Ben Mitchell was later cleared of all suspicion…”) make it seem real, but there are no events in WOLF CREEK based on any real life cases, and all four characters are fictional; rather, writer-director Greg McLean drew inspiration from the 1989 “Backpacker Murders” in New South Wales, committed by Ivan Milat. (To be clear, though this felon serving 7 consecutive life sentences is cited in many discussions about WOLF CREEK – though never in the film itself – his murders and methods are in no way represented here or in this film’s sequel.)

Along with the commendable elements (a car going over a cliff and NOT exploding – how positively un-American!), there are annoying movie devices that seem very “American,” that drive the movie further into fiction. Like the wall of Exposition Newspaper Clippings (“Family Goes Missing in Western Australia” “Young Man Missing,” etc.), near the Exposition Video Camera, that Skinny peers through, and it’s conveniently cued to show a family befriending Mick and being towed by him – all perfectly edited to show their full fate in 20 seconds. Like we needed more evidence Mick has claimed numerous victims, with corpses cramming his kill-sheds fuller than a seaside dunny on Boxing Day.

Made on a shoestring of just over a million colorful Aussie dollars, WOLF CREEK has made back its budget nearly one-hundredfold worldwide over the years, and has secured its legacy as one of Australia’s premier gore-thrillers… so excuse my small personal gripe with the trope of the villain who loves mansplaining his methods. In Mick’s case, he tells a girl how he’s about to cripple her, to stop her from running away – to stop her from running at all! – so that our brains can explode in whimpering terror at the fact he is going to shut down the motor functions in her legs. (This was apparently what Milat did to his victims – severed their spines.) By verbalizing the medical strategy of his attack, Mick made it horrific; otherwise all we would see is an arbitrary shiv to her back and her wide-eyed, speechless shock as she falls. YET – in telling her out loud what he was doing, it subverted the horror because we know this dialogue is only for us. Would a serial killer psychopath rapist really care if his victim appreciated his surgical precision in crippling her – or would he save his breath for the rape? However, I can’t see another way to convey the primal terror. It’s a conundrum. Wrapped in a paradox. Under the shade of a Coolibah tree.

I wonder: Is Wolfe Creek tourism up or down?