Leonardo DiCaprio overacts his way into the heart of Wall Street, into the pants of hookers and into federal jail. He’s playing a real life character, stockbroker Jordan Belfort, THE WOLF OF WALL STREET, whom I hope is at this moment dying a slow, horrible death from cancer of the knob…

The problem with millionaires like Jordan Belfort – or anyone who makes their fortunes on Wall Street – is that it’s INHERENTLY unethical. It means becoming rich on the backs of others who MUST BECOME POOR for you to benefit, while not providing any tangible product, going to your grave with imaginary money as your legacy.

We don’t begrudge rock stars their fortunes or tradespeople their livelihoods because they provide something tangible for our dollar. Yet we hate those Wall Street vultures, because their coin of the realm is duplicity. EVERYTHING is a con. Everything is unethical practices, threaded through loopholes, ass-raped by escape clauses. Laws written by Congress pertaining to Wall Street’s sleight-of-hand juggling of monies are laws influenced by and abetting Wall Street. So FUCK Wall Street. FUCK Jordan Belfort. And FUCK this movie that glamorizes that loudmouth prick who got rich by hurting others to do it.

All that being said, Martin Scorcese‘s black comedy on the rise and fall of Belfort is a gleaming Lamborghini of a film; glossy and hopped up, supercharged for a streamlined guzzle down a flying freeway. And Leo looks like he’s having the ham and cheese time of his life.

Until Belfort hits a spike strip…

Using his gift of gab, Belfort earns commissions and acolytes as a cold call genius aka master bullshitter, in a small company where no one takes their job seriously, selling “penny stocks.” He winds up training them to be sharks, taking many of them to start his own firm.

Jonah Hill is Belfort acolyte Donnie Azoff, who leads a gaggle of faceless employees who worship the ground Belfort drives his Lambos on. Matthew McConaughey is some kind of surf-dude-stockbroker. Kyle Chandler is an FBI agent who can’t arrest Belfort because the childish rules made by rich people who buy congress keep rich people out of jail. And Margot Robbie is Belfort’s trophy wife (the new Jamie Pressly). 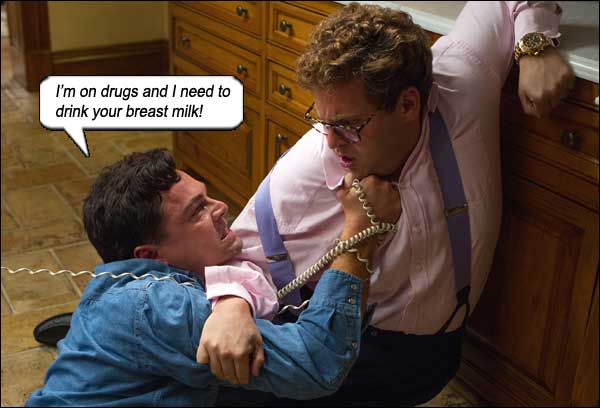 Scorsese directs with the same sharp-toothed verve he brings to all his gangster epics, for in covering Wall Street, he is still truly working amongst gangsters. The real life Belfort has done his time, and is now a “motivational speaker” – another non-real job that cons lonely housewives and timid businessmen into buying tickets to hear him spout platitudes for two hours.

WOLF follows the same beat as GOODFELLAS, where the hedonistic lifestyles of the criminals cannot be sustained and they are brought down in the end, in a massive fantasy raid. An event that can only happen in the movies. And only due to the Gutless MPAA (who decree that no crimes go unpunished or unredeemed). Since when have this many high-level CEOs seen the business end of a lawsuit? And even if they do, aren’t they quickly released to continue their swinish unethical sharking? Why imply that with the CEOs’ arrests, the institution of stockbroking has been brought to justice, when we know that criminality runs like a nourishing river through Wall Street? This is not like entertaining alternate history, like Tarantino’s explosive “historical” rewrites. This fantasy lands with a dull thud, as Wall Street has wasted/stolen taxpayer dollars since its inception and continues to do so.

In no way connected to 1987’s WALL STREET or that movie’s sequel, MONEY NEVER SLEEPS, the tenor of WOLF runs more along the lines of the 2011 remake of ARTHUR – trying to force-feed us a billionaire as lovable. Not after a 700 billion dollar bailout, you lowlife scum!

Casting DiCaprio makes Belfort the hero. Makes it look like such fun to be him, bent out of shape on drugs and trying to step into the door of his Lamborghini. He’s not a hero, kids. He’s a FELON who did 22 months in prison for stock-market manipulation, swindling $100 million out of investors. Investors like YOU trying to make an honest unethical buck from playing the stocks. I’m sick of seeing criminals played by movie stars to sell seats. And then we wonder why unbalanced mongos go on shooting sprees. Because even at the time of the shooting spree, some asshole Hollywood exec is plotting the First Act and making calls to A-Lister agents to see if their client will play the lead…

Turns out wealth DOES make you a better person. That’s why CEOs are treated with more respect than low-income African-American guys who are shot on sight for Being Black.

Why is “wolf” singular anyway? Like it’s only this guy? Every – single – avaricious – prick who works on Wall Street is a wolf. And why a “wolf”? I take issue with that metaphor, that simultaneously connotes “nobility” even whilst warning about the feral nature of the stockbroker prick. But it’s an insult to wolves. Wolves don’t hunt, kill or eat more than they need to survive. Wolves don’t actively sell bad stocks and then bet on those stocks to fail. Wolves are not responsible for whole swathes of their populace becoming homeless without a financial future. These people are lower than any animal metaphors, lower than snakes, pigs, amoeba; lower than pond scum, lower than single-celled animalcules with no functioning brains. We should enact artificial selection on these organisms and kill them quickly, so that they do not spread their dirty seed across the human genome.

WOLF OF WALL STREET is an entertaining movie – but I hate everything it stands for and I loathe every character in it. Maybe if I shout loud enough and my face gets red, they’ll take me as seriously as Belfort the asshat.