THE WOLFMAN starts as a remake of the classic 1941 Lon Chaney Jr. film THE WOLF MAN, and ends somewhere between BRAM STOKER’S DRACULA and AN AMERICAN WEREWOLF IN LONDON.

That ain’t so bad, but not what it was aiming for.

Director Joe Johnston (JURASSIC PARK III, HIDALGO) pays homage to the horror pioneers by including all the old conventions in his remake: the classic poem “Even a man who is pure of heart…” (which is not arcane Euro legend, but penned by writer of the original WOLF MAN, Curt Siodmak), old villager’s tales of lycanthropes, the moon appearing preternaturally large and full – at least ten nights in a row, the full-body jump through bay windows, arms and limbs dismembered, and the fiery finale in a lavish mansion.

Benicio Del Toro is Lawrence Talbot, who returns to swampy 1891 England and his ancestral castle to investigate the mysterious death of his brother. He is greeted ambivalently as a prodigal son by his father Sir John Talbot (Anthony Hopkins, phoning in some kind of distracted cross between Hannibal Lecter and his butler in REMAINS OF THE DAY).

Lawrence is distracted himself by his brother’s widow Gwen (Emily Blunt), and he is tailed by a detective (Hugo Weaving) creating the template for reporter Jack McGee in THE INCREDIBLE HULK television series – always showing up after the fact. 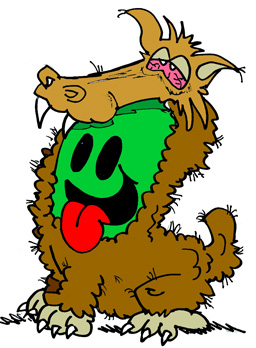 When he visits a gypsy camp one night, Lawrence is bitten by a werewolf. And we all know what happens then: your body grows long wolfy fingers, your back muscles expand and your shirt rips off, your paws grow massive and your shoes explode – but your pants stay on. Really tight – like the Incredible Hulk.

Rather than take after the CGI wolves in the stillborn TWILIGHT series, or even the rampaging wolves in the UNDERWORLD series, I was glad to see THE WOLFMAN’s wolf-man design emulated the classic Lon Chaney look – a wolf-headed man with barrel-chested human torso, just slightly less hairy than a Middle Eastern teenager. The white ripped shirt and black vest with Elizabethan trousers stretched tight complete the classically Euro lycanthrope ensemble.

There is nothing intrinsically “wrong” with this lush production – the effects are superb and naturally much better than the 1941 version or any of its sequels (I still remember as a kid being dissatisfied with Chaney’s onscreen transformation – the slow dissolves from one makeup point to another – even though it was supposedly “Hollywood magic”); the gore teeters on the cusp of gratuitous and ludicrous, the night forests are eternally backlit by kliegs, and the story is changed minimally to accommodate a wolf-on-wolf deathmatch finale. Danny Elfman’s soundtrack alternates between LORD OF THE RINGS and BATMAN BEGINS. The most uncomfortable aspect is that maybe this production takes itself too seriously. And ends up funny.

The interaction between Hopkins and Del Toro seems forced – they are meant to be estranged father and son, yet they seem like they’ve never ever met before their dress rehearsal. Art Malik as the butler is a strange piece of casting pie. And there is hardly any chemistry between Lawrence Talbot and Gwen, as they share but one kiss, so her distraught chase after the hunters to save him as The Wolf seems a little forced. But Anthony Hopkins as a pudgy, blondish wolf is priceless.

I fear the faults in this movie may be ours – the moviegoing audience. Are we too cool to take in an old-fashioned tale of simple legendary horror without trying to read everything as a homage to arcane movie references or a nod to modern ones; without trying to see irony or cynicism behind everything? Even this production felt it needed to add a “twist” to the original tale to hold our interest. Have we outgrown the old monsters?

And just how many nights of a full moon can the Earth stand anyway?

imdb
Word Count: 670     No. 658
“Even a man who is pure of heart
And says his prayers at night
May become a wolf when the wolfbane blooms
And the Autumn moon is bright.”
Well – if he’s bitten by a werewolf, that is.