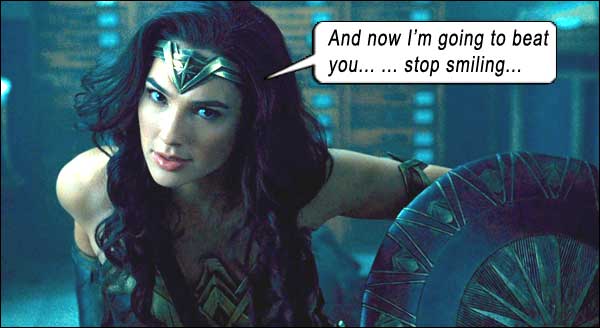 Superman in a bra.

Thighs shaved smoother than a cucumber. Cupid-bow lips. Armored breast. Screenings for Lesbians Only. The first ever feature film for the DC superhero WONDER WOMAN has already caused its fare share of controversy and orgasm.

It seems as if critics are only lauding this Patty Jenkins-directed film for fear of retribution from the female gender, and as contriteness for heaping such derision on the female-driven GHOSTBUSTERS last year. The first female superhero movie? Oh, it’s the best movie ever made! Best superhero movie by a mile! Totally “gets it” for women!

You lost me at lesbian screenings.

WONDER WOMAN is undoubtedly a thrilling tale, with excellent production values, an origin story not done to death like Batman’s or Spider-Man’s, its star an alluring neophyte in man-dribbling mini-skirt, with a scarring orchestral theme that halts armies and storms ramparts! (The bed of Hans Zimmer drums, the wailing banshee tritones of Junkie XL; insistent, vertiginous, clawing into your cerebral cortex!) Yet the movie fails to jolt into the upper climes of superherodom. Maybe it does for feminists and those boyfriends who need to gain access to feminist panties, however as part of the DC Extended Universe, WONDER WOMAN fails to grapple with the darkness and depth of MAN OF STEEL or BATMAN V SUPERMAN. It gets very close though. As close as a shaved thigh on a pouty face. 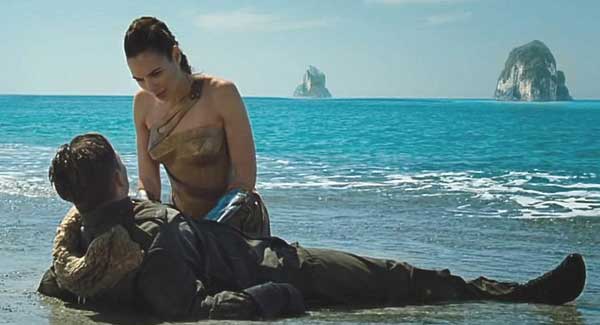 Wonder Woman’s origin story (created by William Moulton Marston in 1941) was originally set during World War II. WONDER WOMAN (written by Alan Heinberg, Zack Snyder and Jason Fuchs) is set in WWI, because the filmmakers wanted “social innocence” (read as women being treated like second-class citizens without repercussions: they wanted Diana to be out of place when brought to 1900’s London, yet unable to change the social climate).

Other than the era change, Wonder Woman comes to us as we remember her: embarrassingly patriotic red-white-and-blue garb, shield, sword (called the “god-killer”), Lasso of Hestia (aka Lasso of Truth), and tiny black nun’s panties covered with armored platelet and a gold-rimmed corset that makes us yearn after that and those.

A brief prologue shows Diana Prince aka Wonder Woman (Gal Gadot) in modern times, looking at a vintage 1918 photograph of herself (see SIDEBAR). Then we are flashed back to a sun-soaked paradise island – Themiscyra, where we find a city of warriors bred for battle, ruling their land with wisdom and strength, running a society with ingenuity and intelligence, with no need for the opposite gender except for procreation; in other words, a society of men— Uh oh! Now I’m in trouble. No, not men – Amazons! Wild warrior women!

Baby Diana is trained by Antiope until she blossoms into Gal Gadot, faster than a speeding bullet, more powerful than a locomotive, able to leap— well, you know. And that is the movie’s contradictory misstep: Diana and the Amazons are bred for one thing – battle against Ares (Hippolyta warned: “Ares the god of war turned men against one another and war ravaged the earth”) – yet when grown Diana wants to lend her fighting bosom to the World War because she suspects Ares’ meddling, the first thing the Amazons do is disown her, telling her The legends are not true!… See? Now do you get the reason why this movie is not credible? And you thought I was just being sexist. 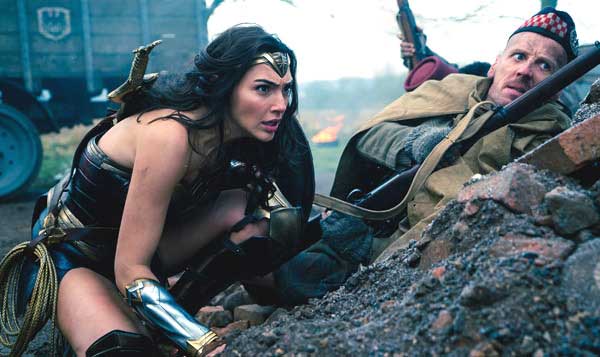 Y’know, if you try to find a picture of Wonder Woman that ISN’T prurient – you will fail.

When American pilot Steve Trevor (Chris Pine) crash-lands on Themiscyra and inadvertently leads Germans to its shores, the warrior women launch into sexy battle and win. (Fist-up for woman empowerment and all that.) Sexy and kiddie-clean, as there is no blood whatsoever in this balletic battle utilizing blades, arrows and guns. Antiope even takes a bloodless bullet for Diana. (But I thought their armor was bullet-proof, or is that just Diana’s gauntlets? Even so, the pellets from these old-fashioned guns couldn’t have done that much damage – why not rush Antiope to that pool of rejuvenation that they put Steve in? Movies, huh?)

Steve, an American spy, importunes the Amazons to join him in the war effort, telling them of the villainous General Ludendorff (Danny Huston), and his chemical warfare mistress, Dr. Poison (Elena Anaya), from whom he stole deadly information. But the Amazons do not believe, as Diana does, that Ares is behind the “war to end all wars,” so decide to bravely sit out this world conflict. Diana is forced to steal the shield, lasso and sword, and sail off as a runaway with Steve. She’s painted as a rebel because Wonder Woman, like Superman, threatens to become a boring character if she is all-pure. Hippolyta laments to Diana, “If you choose to leave, you may never return.” (Uh, one good reason, please?)

Yet… as Hippolyta watches her daughter disappear over the waves, she proclaims, “The more she knows, the sooner he will find her,” meaning she ADMITS Ares is behind the war, also revealing she has not told Diana something important. We would learn later it is Diana herself who is the “god-killer.” And there was no reason to keep that secret. And if Hippolyta is so dubious of Diana’s battle prowess, why not just mobilize her army of lazy Amazon bitches and join the war effort?

You lost me at star-spangled underpants.

Back in smog-choked 1918 London, it’s fish-out-of-water time as Diana tries to fit in with a misogynistic society where women are subservient, like Steve’s assistant Etta (Lucy Davis, still a secretary; in THE OFFICE, sensual; here, frumpy). Diana enters the all-male House of Lords, led by David Thewlis. She berates the generals, not understanding how they can knowingly “sacrifice all those lives.” Answer: Because all men are pigs, right girls?! 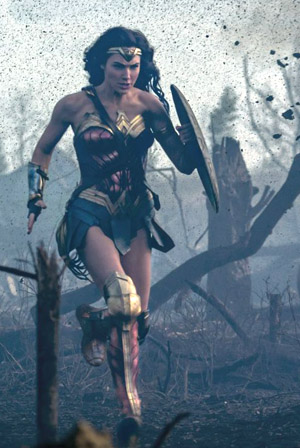 Movie is funny in innocuous ways: Diana tells Steve, “Only an Amazon can defeat Ares.” He replies, “We need to get to London and try to find the men who can.” She retorts, “I’M the men who can!” It’s cute because it’s true.

Homage to SUPERMAN: they put glasses on Diana as a disguise; she stops a bullet in an alley mugging; she gads about in a big cloak to cover her armor/nakedness.

The old trope of Steve recruiting his men while they’re engaged in bar fights – Said Taghmaoui, Ewen Bremner and Eugene Brave Rock (very cool to include a Native American on this ragtag team); the three men who would be in that amazing cross-generational photo.

Quite childishly romantic, as Steve and Diana spend but one night together in a hotel room, before they will be separated by tragedy; although I’m thinking of the logistics on how a super-powered being can ever be satisfied by a mortal, even if he is the Captain of the Enterprise. Superman’s Kryptonian thrusts are two decades away.

At the front lines, the team is pinned down in a trench. Steve yells, “This is No Man’s Land; no MAN can cross it!” Oh, here we go – fist-up for substituting the word ‘woman.’ Thankfully, they don’t, and instead go for the jugular with the Wonder Woman reveal.

Slow motion, Diana climbs out of the trench, shrugs off her cloak, revealing the battle armor that wouldn’t cover a midget (prompting all male genitals to slowly “unfold”), and steps into the mud of No Man’s Land. Somehow, she has her sword and shield, boots, gauntlets, thighs, waterfall raven tresses babbling over naked shoulders, flap of groin-skirt sensually teasing, you could almost taste the pearbottom… In this hero shot, violins chug, smoke drifts, she looks like Linda Carter – the movie has won! –

Bullets scream at her, they ping off her gauntlets and shield, and then, the chugging is joined by those temple-throbbing drums – and the jarring tritone theme unleashes its fury. We almost wet our groin-platelets in ecstasy.

DC movies have started to follow a dangerous pattern (no, not just the new longer motion logo, which Cinema Sins will go ape over): their third acts devolve into eye-shattering CGI battles that would do TRANSFORMERS films proud. It was great in MAN OF STEEL, as Superman used his powers of flight and strength in ways that had never been visualized before; the city-sized explosions became a little tiresome in BATMAN V SUPERMAN, but here… they’ve bought the farm on predictable and overblown with Wonder Woman versus Ares, just clobbering the shit out of the greenscreen.

The villain gets to soliloquy on “wiping out Mankind and bringing paradise to the Earth,” which I can’t find fault with. She actually answers, “I can never be a part of that!” Give me one good reason why you don’t want paradise on Earth again? But the audience is not given the chance to ponder contradictions, as now Wondy is fighting a gigantic Viking special effect with a man-skort. How can she possibly win against this obviously stronger god? Answer: more special effects.

The big questions in play in WONDER WOMAN (Is Mankind worth saving? Will love save the world? Is every human both darkness and light?) become totally irrelevant due to the movie’s own plot. You see, after Wonder Woman defeats the Visual Effects Department (aka Ares), all the Germans break out of a trance and become good again. They’re telling us that all that “morality” and “love of war” has nothing to do with human free will, but possession by Ares! Which means that questioning Mankind’s dual nature, and capability for love, and busting out the painfully trite “They are warlike – yet noble” speech can all be boiled down to, “Just keep Ares away from them, they’ll be okay.”

“It’s about what you believe. And I believe in love.” Diana’s opening and closing maudlin narration makes us cringe, as the filmmakers try to tie Wonder Woman to William Marston’s original ethos – that she would combat hate (i.e. war) with love (i.e. breasts). “I have seen the terrible things men do to each other in the name of hatred, and the lengths they’ll go to for love.” My gorge is rising, as well as… “Only love can save this world. So I stay. I fight, and I give… for the world I know can be. This is my mission. Now. For ever.”

And a cheese factory exploded in London.

That unique banshee wail you hear is not an electric guitar – it’s an electric cello! Performed by Tina Guo in an outfit that simply screams, “… if by woman empowerment, you mean objectifying women.”
It sounds so evil because it uses the infamous “tritone” – an interval of three tones, which is commonly called the “devil’s interval,” historically evoking a sense of unease and doom in the listener. Black Sabbath used it to great effect on Black Sabbath and other classics, as do many heavy bands (Metallica in Enter Sandman, KISS in Unholy). 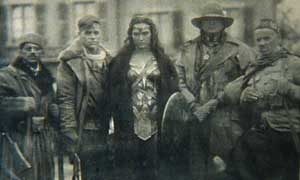 That photo! First seen in BATMAN V SUPERMAN (Mar 2016), this amazing photo features the exact actors who would play in the WONDER WOMAN movie one year hence! But we never noticed them. The B-characters, okay – but we never noticed Chris Pine standing next to Gal Gadot?! It makes us wonder: Did they cast WW before BVS? How did they DO that, with contractual obligations and schedules and actually having to shoot that photo? The logistics are mind-boggling! 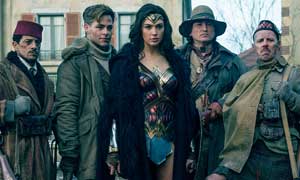 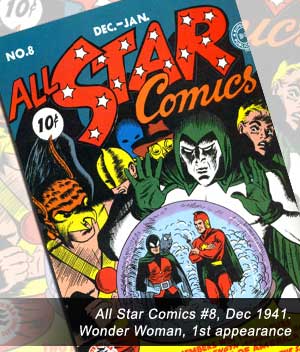