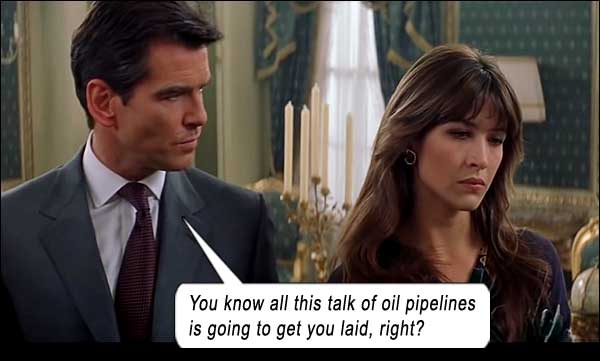 Another villain with a bomb. Another hero who must defuse it. That’s what the twisty confusing plot boils down to in the James Bond actioner THE WORLD IS NOT ENOUGH.

The cold open features a rather tame, though humorous, escape for a Bond movie, as Bond easily rappels down an office building (tied around a man’s waist at the top) – until we see the real cold open excitement: a powerboat chase of a damaging brunette in red leather (featuring Maria Grazia Cucinotta, who would also appear this year in THE SOPRANOS as “Isabella” S1E12). Featured gag is Bond’s boat doing a corkscrew jump out of the water (homage to the corkscrew car jump in THE MAN WITH THE GOLDEN GUN, 1974). After Bond damages more property and endangers more lives than any bad guy, the girl blows up (–awwww! What a waste of hotness!) and the opening titles slink in…

… with naked girls writhing in oil, while Garbage performs The World Is Not Enough. 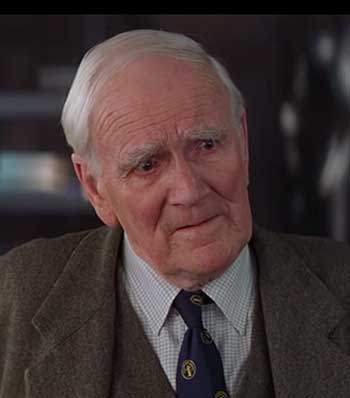 Desmond Llewelyn as weapons expert Q introduces “the young fellow who’ll be replacing me…” – John Cleese, who brings his A-game for the cameo! The producers wanted to film a farewell to Llewelyn in the last film (TOMORROW NEVER DIES) in case he retired, instead filming a quick goodbye here – and well they did, for 85-year-old Llewelyn would die tragically in a car accident one month after WORLD premiered. Bond even looks sad when he asks Q whether he is serious about retiring.

We did not know it at the time, but sadly, Llewelyn’s last words in a Bond film would be, “Always have an escape plan,” and as he descends out of sight, it would be the last we would see of him. The saddest cut of all is that Llewelyn expressed a desire to be in one more Bond film.

What would a Bond movie be without a car supplied by Q that shoots missiles? Bond uses such a car… and for the first time, when the car is ultimately destroyed, Bond makes a callback to his cantankerous pal: “Q’s not gonna like this!”

He might have provided the secret weapons, but all this time Desmond Llewelyn himself was the Bond series’ secret weapon.

Directed by Michael Apted (EXTREME MEASURES), this caper is set in motion when M’s personal friend is killed, leaving an oil empire for his daughter, Elektra (sultry Sophie Marceau, BRAVEHEART, 1995). A shoulder injury almost prevents Bond from pursuing the killer of Elektra’s father, but Bond plonks his hot doctor (Serena Scott Thomas) for a clean bill of health.

He makes contact with Elektra as a protector and ends up as an injector, if you take my meaning. On bedsheets that are getting progressively less concealing as the decade moves toward a new millennium. What I’m saying, boys, is – yes, there’s some nip slip…

As the hot chicks pile up, movie loses all credibility when it introduces Denise Richards as a physicist [record scratch]— named Christmas Jones, garbed in crop top and hot pants – because that’s how physicists dress. You read that right: Denise Richards is a Doctor of Physics — with not one scintilla of acting ability, as the producers discover when they mistakenly try to force lines of physics dialogue through those lubricious cupid-bow lips (“We’re safe from the radiation as long as the reactor coolant doesn’t burst!”) which were purposed by nature only for carnal intercourse grunts.

Christmas works for Elektra, who is trying to build an 800-mile pipeline “through Turkey, past the terrorists in Iraq, Iran and Syria.” Terrorists in those three countries? You don’t say! So they were praising allah and blowing up civilians back in the 90s, just like they are now? And 5,000 years ago, same. And I’m betting it will still be the same 10,000 years from now. Proving that there’s no cure for religious fuckheads. 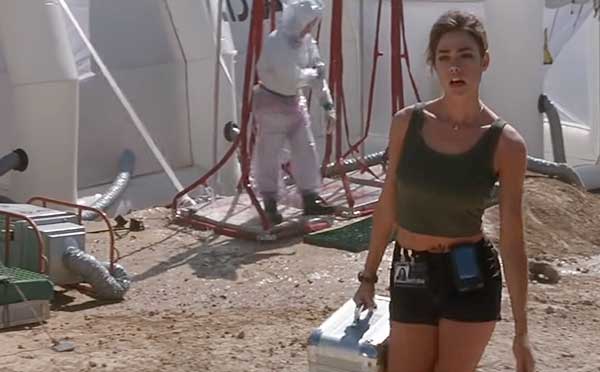 A physicist arrives at work.

Some Bond movies snap our necks with all the unnecessary locations – WORLD is one of them. It just seems like writers Neal Purvis, Robert Wade and Bruce Feirstein are thinking up vignettes to keep the story kinetic, yet not giving a toss on how or why the characters would find themselves in those situations. Like Bond and Elektra skiing down a mountain pursued by “parahawks” (guys in snowmobiles, suspended by parachutes). Choppered to the top of this mountain to supposedly “check the survey lines,” Elektra has brought no equipment except her skis and panties, no camera, no tools, not even one stinking clipboard to take notes. What kind of “surveying” are you doing, woman? It’s just a romantic interlude for these two, interrupted by Parahawk Action Sequence, which we would find out later has no meaning to the plot anyway.

At the Azerbaijan oil fields, Bond sees a helicopter outfitted with five circular saws hanging below it, cutting through trees, clearing land. Like THAT isn’t foreshadowing. (It’s what cuts through Q’s car later!) Part of the story is set in Istanbul, but a real life terrorist bombing there forced the filmmakers to do those scenes at Pinewood instead. (Thank you SO much, religious fuckheads!)

Robbie Coltrane reprises his role as Russian gangster Zukovsky. (We met him in GOLDENEYE; he skipped a movie, he’s back again, though I’m sure his accent has become more schoolyard-Boris than his last go-around.)

Eventually we meet the terrorist behind the bomb, with that special oomph Bond gimmick: “a stray bullet moving slowly through his brain, killing his nerves, so that he feels no pain, getting stronger until his eventual death.” Robert Carlyle, so impressive in TRAINSPOTTING and THE FULL MONTY, has nothing to do here as Renard, generic Bad Guy. His “gimmick,” which we know the writers gave him to creatively pummel Bond, is never even utilized properly. When he and Bond eventually engage in hand-to-hand, over the thermonuclear device that Christmas can’t pronounce, Renard is not inordinately stronger than Bond, neither does he “feel no pain,” as every time Bond kicks him, he goes, “Oouf!” and “Aargh!”

To further the annoyance at wasting such an ominous personality on generic punching, when Bond gets the drop on Renard – he’s the one now talking instead of shooting! You’d think he’d learn from all the talky villains who’ve gotten the drop on him, but maybe he thinks this is how international espionage is done?

At just over 2 hours long, we start to feel it, as the movie wends its way around the Middle Eastern world, especially when machine guns are popping off and bombs are blowing up and no one is getting hit except bad guys, and the air around Bond and Christmas.

When Elektra asks M to protect her personally, we have to ask ourselves what M can do that ten skilled male agents can’t. The trap is so obvious, it’s only a matter of time before M finds herself in an easily-escapable cell. But then, it would seem every trap for Bond is never designed to kill him either, but to put off his death, as Renard strands Bond in an exploding mine and Elektra ties him to a torture chair. (Maybe these people need more religion – to become better killers.)

The last sequence finds Bond and Christmas trapped in a sinking sub. Can’t get more claustrophobic than that. Well, you can if Denise Richards is saying her lines at your face like a first-year acting student. Really, couldn’t they have switched the Christmas role with Maria Grazia Cucinotta instead?! Tits AND brains.

There’s a new villain dynamic in THE WORLD IS NOT ENOUGH – The Bond Girl is also The Bond Villain. (No, I’m not saying Robert Carlyle is a girl, I’m saying Sophie Marceau is playing both sides of the bed.)

Elektra was kidnapped by Renard when young, and embraced his ideology (Stockholm Syndrome, meet Patty Hearst), so even though Renard is the mad bomber, Elektra is his mad funder; he’s the muscle, but she’s the megalomaniac tactician calling the shots, aiming to rule the world through Big Oil, which, as we know, is a much more criminal enterprise than a simple kidnapper-bomber.

As usual, movie ends with Bond having Christmas.