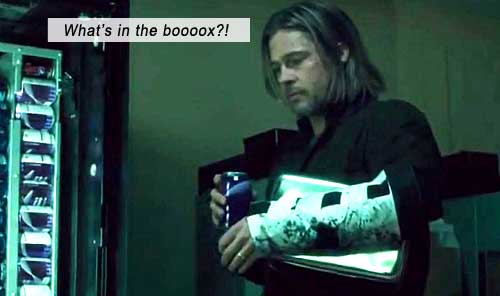 The first interesting zombie movie ever made in the history of cinema!

WORLD WAR Z has, uh, reanimated the zombie movie. This ain’t George A. Romero’s non-actor-fest. Brad Pitt’s production company, Plan B, have hired some very serious fellows to take all this undeadness very seriously: director Marc Foster (THE KITE RUNNER); based on a novel by Max Brooks, screenstoried by two talents Matthew Michael Carnahan (LIONS FOR LAMBS, putting his big political brain on hold for this one) and Damon Lindelof (PROMETHEUS, STAR TREK INTO DARKNESS). 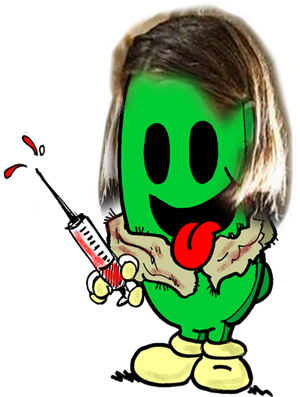 The terrifying new face of the Zombie Hunter

First and foremost, it’s not a “zombie” movie – let’s flense that terminology from our  brains immediately. United Nations researcher Gerry Lane (Brad Pitt, with a hairdo that makes me uncomfortable) finds himself and his family suddenly in the midst of a pandemic on the streets of Philadelphia; some kind of “infection” that causes people to go insane within 12 seconds and start biting other people, thereby infecting them. These infected people jerk and twitch spasmodically, and mindlessly attack others at high speed. It’s like a Black Friday sale, only more intelligent.

Gerry is called in by his U.N. boss (Fana Mokoena) to put himself in harm’s way to find the source of the infection, in return for his family being kept safe on an aircraft carrier out to sea. It is almost said that bluntly. Though we like to pride ourselves as a species on compassion and empathy and other lies, in the final telling, selfishness will always out.

So the movie raises its level of intelligence yet again, not just with the selfishness angle, but how it is a desperate hunt for Patient Zero (rather than just shuffle grab, shoot, run) to gain clues on how the pandemic might be curbed. From the U.N. staff, Gerry is given theories on where to start looking for clues, and what he might be looking for – a virus? bacterium? One email from Jerusalem cites “zombies,” and the staff scoffs. Meanwhile the military grunts call the infected people “Z’s,” because as we all know, military grunts are just too kewl for skool.

In a gruesome scene, one of Gerry’s military escorts, Segen (Daniella Kertesz), is bitten on the hand, and without thinking, Gerry chops off her hand to stop the infection “turning” her. Segen will end up following Gerry across the globe as a lethal ally; a touching partnership that will studiously avoid falling into filmic tropes: we are conditioned to believe that any man and woman running from danger over the course of a movie eventually have The Sex; Segen and Gerry do not, as Gerry’s wife (Mireille Enos) waits back home with their two daughters and an adopted boy whose family died (oh Brad, you just can’t help yourself!). We are also conditioned to women slowing down an escape party by tripping over a lot and screaming insufferably, but even though Segen’s hand is traumatically missing, we still feel this military woman’s power, and we somehow sense she is not the type that will trip like a dame – and this movie thankfully doesn’t embarrass her and her gender by making her do that.

Gerry’s extraction helicopter is downed by CGI which is now clearly out of control, and he and Segen find they are stuck in Jerusalem surrounded by a bunch of zombies. Which is another way of saying stuck in Jerusalem. 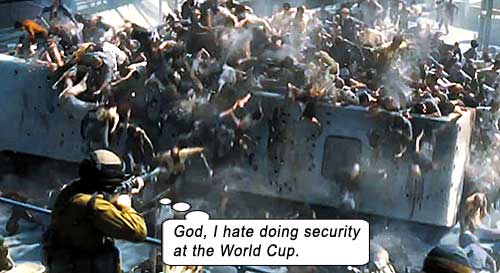 They jump a British flight and crash-land conveniently within disabled walking distance of the World Health Organization, where Dracula Peter Capaldi (IN THE LOOP) and SuperEuro Pierfrancesco Favino (ANGELS & DEMONS) tie him to a table and make him apologize for MR AND MRS SMITH. Movie also must confess at this point, that it stoops to the antidote-is-in-Building-B-which-is-guarded-by-zombies cliché. And they also manage to squeeze in a holding-door-closed-with-hands-grabbing-through-gap gag.

WORLD WAR Z is actually very well written as a mystery action thriller: the hero (Pitt, of course) is creatively isolated, HE is the person who, through clues, theorizes the “antidote/camouflage,” and the story wends in such a way that it is HE who must test his theory on HIMSELF, in order to prevail. It’s the perfect hero vehicle, especially for someone whom we’ve come to regard as an intrinsic hero like Pitt, and it is couched in what resembles a “zombie movie” with the focus not on the undead, but the non-dead, i.e. the living, with definite reasons and wills to live, rather than just to make it to the next jump-scare. The risk is daring, life-threatening, and the payoffs heartfelt, poignant, and ultimately redeeming for the world and humanity itself. And maybe even his hairdo…